Protests against the 13 point roster system.

Under the 200-point roster system, the entire college or university was taken as one unit.. It was ensured that out of every 200 posts, 99 posts remained reserved for SC, ST, and OBC communities, and 101 posts were unreserved. Under this system, a deficit of reserved seats in one department could be compensated by more people from the reserved communities in other departments.

Protesters say that the new roster will mean a reduction in seats reserved for SC/ST candidates, and is thus exclusionary.

When asked why they were protesting, Dr. Rai from IP university said “ The current roster promotes inequality, the SC/ST due to this policy are left jobless and without any representation, I am here to represent them in their cause.” “This policy is one of the ways by which the Modi government is trying to demolish the minority in India completely.”

Former JNUTA President Sonajharai Minz said, “The 13 point roster system is unconstitutional. They are meant to represent the deprived sections in order to be part of mainstream. The decision of Allahabad High Court upheld by Supreme Court makes the roster system a mechanism to exclude who were meant to be included.

“They are trying to exclude and deprive the marginalised and foster inequality,” she said.

“At least there is a possibility for justice in 200 point roster system as the institution is considered as a unit.”

“Only meritorious candidates from these sections are given chance.” She said that she joined JNU before the reservation as the JNU leadership made the system inclusive. “The 13 point roster system is preventing the logic of representation.”

Dr Rajnath from IP University said, “This is discrimination among us. We are not satisfied with the current roster, which is against the Dalits, SC, ST and other minorities. This kind of discrimination is against our culture. The roots of our country is based on equality, so the 200 point roster is better for us.”

Aejaz Ahmad Rather, the general secretary of JNUSU said “It is an attack by Modi government. Since they recently lost the elections, it is a way to regain upper caste votes as recently they passed the reservation based on economic class. It is an organised attack as by bringing 13 point roster system they are trying to seclude the marginalised.”

“Initially the reservation was university wise but now it is centre wise. It is an attack on institutions to keep the marginalised away from university. The BJP has already made the physical attack through lynching cases, be it any Muslim or Dalit. Now, they are adapting the policy attack. They are trying to bring the caste system back “varna system” as the reserved categories will be kept out of the knowledge domain,” Rather said.

“We will fight for employment and universities. We will take this campaign further”, Rather added.

Surabhi Singha, a DU student doing her masters in Political Science says “the current policy makes us question who will teach us in the future. What kind of political ideology will be formed if the 13 point roster continues. If this continues the marginalised sections of our country will be completely left behind.

For Vishal, a student from Delhi College of Arts “ the way it has been imposed is not acceptable. One needs to understand the agenda that most of the assistant professors are from upper caste.

I believe that the teachers should be appointed as per the need. Apart from it, reservation has been historical. The only solution is equal employment and equal opportunities.”

“It is a fight where the students, teachers and the no teaching staff needs to unite.”

Santosh Yadav, studying in JNU and belonging to the reserved category, said “They have made a Dalit President but this current roster makes sure that there won’t be any Dalit teachers, We need to save constitutional mandate reservation. The turn up of this protest has been vast, the government cannot ignore our plea as the general elections are soon, we are hoping for a positive response.”

The protesters demands include: 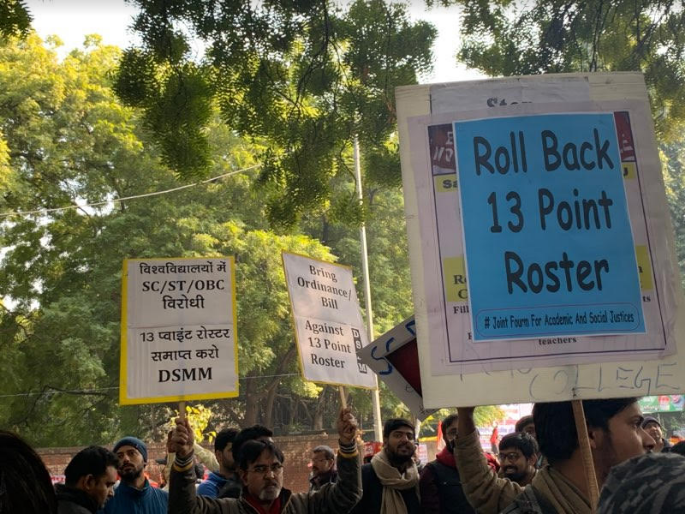 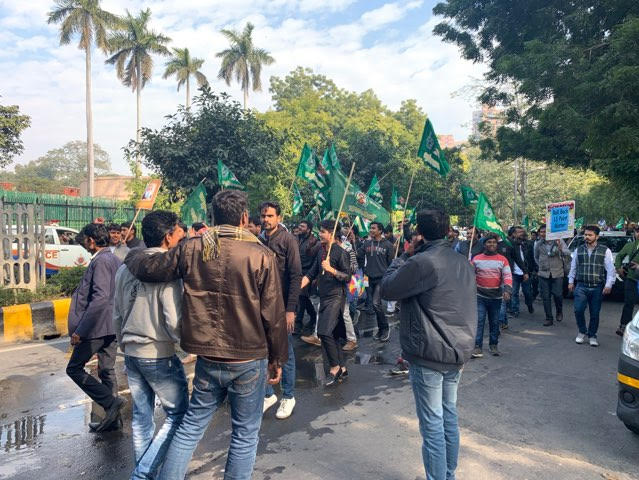 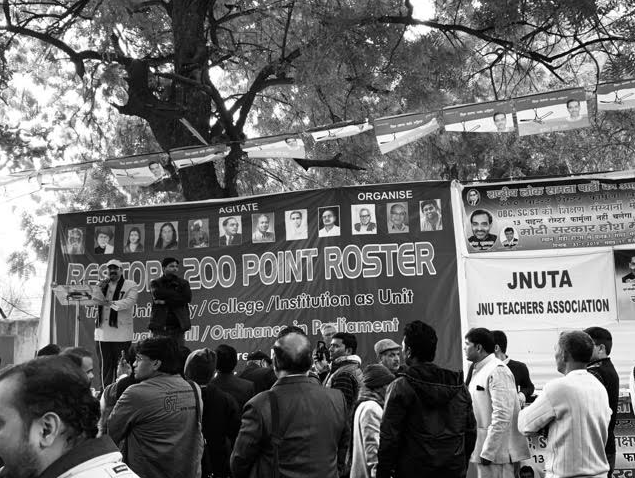