Why The Beef With The Beef Ban Is Misdirected

MUMBAI: Dear Indians on social media. I get it. You’re angry. You woke up to headlines screaming that the Maharashtra government has banned beef. Goodbye medium-rare steak. Goodbye juicy beef burgers. Goodbye delish beef stew. You can get five years in jail for eating any of the above, right?

Wrong. Cow meat hasn’t been available in Maharashtra since 1976, when cow slaughter was banned under the Maharashtra Animal Preservation Act.

This ruling, known as the Maharashtra Animal Preservation (Amendment) Bill, 1995 -- that has taken 19 years to come into effect -- has nothing to do with cows. It bans the slaughter of bulls and buffalo. Except that lowly water buffalo that provides carabeef -- that trust me, you don’t even want to touch.

That medium-rare steak, that juicy beef burger, that delish beef stew was either a) buffalo meat or b) illegally imported beef. If it was any good, it was the latter.

Don’t get me wrong, I get your anger, but where was it in the however many years it has been since 1976? Chances are you were born in a Maharashtra where cow meat has been illegal, so why are you crying now?

Now let me tell you why the ban on buffalo and bull slaughter is problematic (hint: it has nothing to do with your steak, burgers or stew). Beef is the poor man’s goat. It is one third the price of mutton, and for those whose religious-beliefs allow, an important source of food. In Maharashtra, beef trade is largely controlled by Muslims of the Qureshi caste, and this ban will a) render thousands of people jobless and b) drive up the prices of the beef that is available -- carabeef -- which may not affect you and me, but will affect the state’s poor.

And it’s not just beef traders and people who eat the meat who are affected. Farmers are angry too as the new law now prohibits the slaughter of old animals (earlier just the cow was excluded). A farmer quoted in the Indian Express says, “A recent government report has stated that there is nearly 61 per cent fodder shortage in the state. By banning the slaughter of old and infirm animals, the government is doing grave injustice to the healthy animals and farmers of Maharashtra.”

So stop flooding my newsfeed with posts like this: 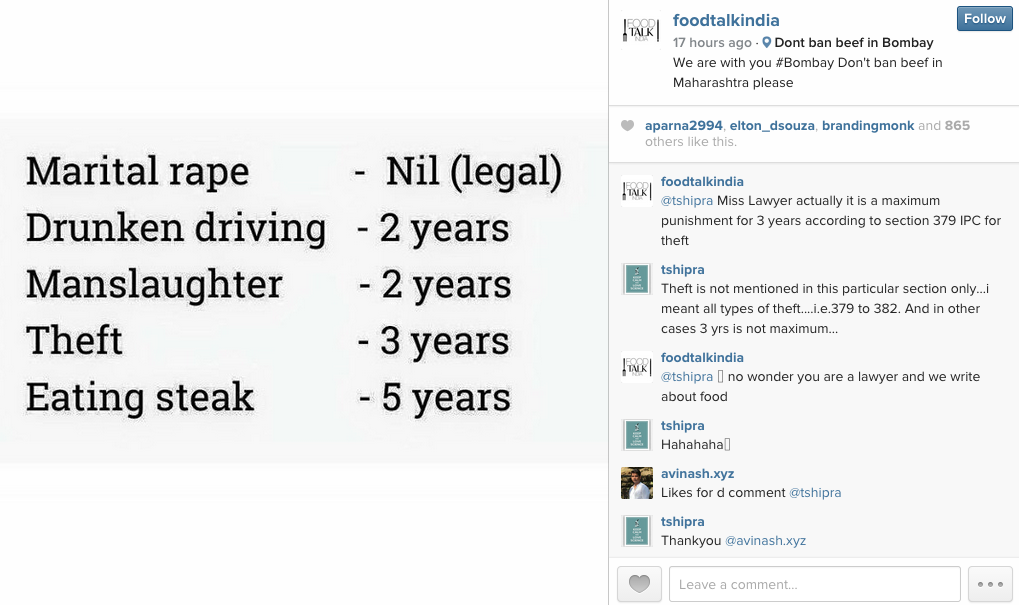 And these would be funny if they were not however many years its been since 1976 TOO LATE. 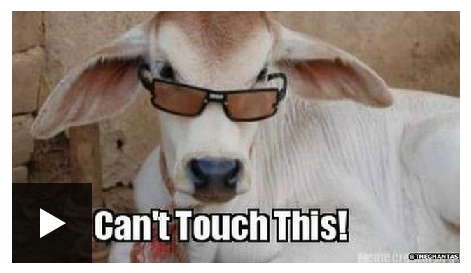 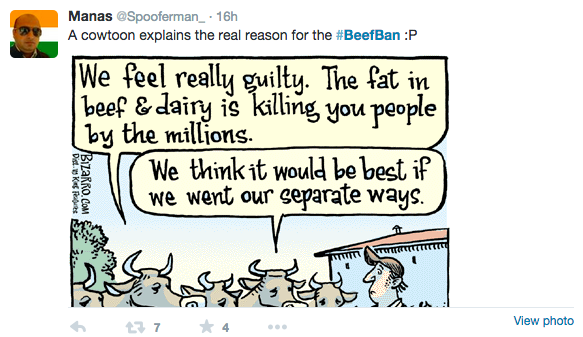