Have The Sanghis Officially Lost It? Crowd Threatens To Skin Tourists Over Goddess Tattoo

Harassed for a tattoo.

MUMBAI: An Australian couple say that they were harassed and taunted at a restaurant in Bengaluru, as people objected to a tattoo of a Hindu goddess on the man’s leg.

21 year old Matt has a tattoo of the goddess Yellamma on his shin, which became the focus of right-wing Hindu “hospitality” as BJP activists took photos and videos of the tourists, and demanded that Matt’s leg be skinned because “this is India.”

“They were taking pictures and videos of us and talking about us in English,” Emily, Matt’s companion told the Deccan Chronicle. “When I asked them to stop, they confronted us about Matt’s leg, saying he should be skinned.” The waiters in the restaurant allegedly stood by, talking and laughing with the politician and his supporters. When they left the restaurant a short while later, they found a group of around 25 people, including a cop, waiting outside for them. “The cop joined in with the politicians,” said Emily. “He said this India, have the tattoo removed.”

The couple were then taken to a police station. "The cops at the station were being quite nice to us, but they didn't let us leave. They said we were being accused of intentionally spreading hatred," Emily told the Deccan Chronicle.

"We saw the couple surrounded by a large group of people, none of whom attempted to help them. The Hoysala van arrived soon after and they were taken away to the station. The politician, meanwhile, was delivering a speech about his love for his religion,” an eyewitness told the publication.

In the end, the couple were asked to write a letter of apology, wear long pants covering the tattoo and …. “learn Kannada.”

“I studied in a school in Kodaikanal and I love India, which is why we came back to visit. We have heard about the growing Hindu nationalism, but nothing justifies the way we were treated. I love Hinduism - I also have a Ganesha tattoo on my back. I didn’t think I was doing anything wrong,” Emily said.

Emily posted the following on Matt’s Facebook page: “I arrived in Bangalore one month ago, with my boyfriend Matt. We had been welcomed by friends with such love and genuine interest about the couple of tattooed white kids that we are. However, whilst we have been welcomed by our peers there has been a wave of blatant racism and intolerance that has been a constant struggle. You hear horror stories about India, this is one. But, Matt and I will not be intimidated by self-styled guardians of morality. We will not sit down when there is no justice. Two weeks ago, I was groped and sexually assaulted at a concert. After being aggressively fondled, I thought to myself 'surely this is my Indian horror story.' At every turn it seems that I find myself on the back foot of Indian society. When I leave the house, I have to prepare myself for what is potentially lurking outside. Everyday, I defend myself from people who are intolerant of a western women, there are people who merely stare but what is more concerning is the cacophony of insults that is thrown at me, on a daily basis. Yesterday, what we originally thought would be a quiet bite to eat turned into a vicious assault by members of the BJP right wing political party. These men are held with high esteem in Karnataka, with police bending backwards to please them. This meant that Matt and I were victims of being illegally detained. Yesterday, Matt and I found ourselves sitting in Ashoknagar Police station accused of 'intentionally spreading hatred'. We repeatedly asked to leave, but were detained, although we were told we had not violated any criminal law. Please read and share the following article - We love India but we will not be quiet in the face of injustice.” 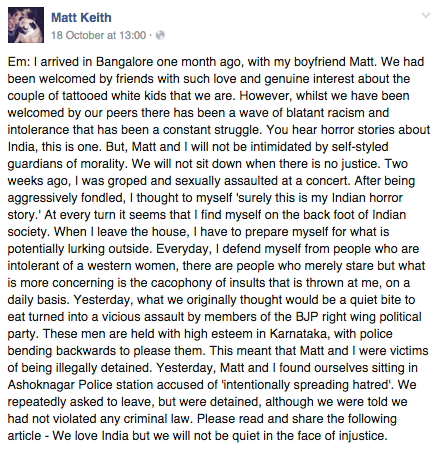 The incident is worth writing about given the general atmosphere of hate and intolerance. A day ago, independent Jammu and Kashmir legislator Engineer Rashid was attacked in Delhi by a group of unidentified persons who threw black ink on him. The lawmaker had been beaten by BJP legislators inside the state Assembly a few days ago for holding a ‘beef party.’

Rashid, who is used to confrontation being from the border state in perpetual conflict, said after he was covered with ink, “this is the sign of what is happening in modi’s India, not Gandhi’s India.” Rashid added, “the world will see what India has turned into. They say Pakistan has been taken over by Taliban but look what’s happening here.”

Also a day ago, the Shiv Sena, clearly not impressed with its coalition partner in Maharashtra, stormed the BCCI office of president Shashank Manohar warning him against holding a scheduled meeting with his Pakistan counterpart Shahryar Khan, Shouting slogans against the cricket authorities, and carrying placards the Shiv Sena mob of about 50 made it clear that any such meeting would not be allowed to be held.

A day before that, Zahid Ahmad Bhat, a victim of Udhampur attack who succumbed to injuries at New Delhi's Safdarjung hospital. The Udhampur district in Hindu-majority Jammu region was observing shutdown on the fateful day over the discovery of three cow carcasses in Chenani village which had sparked communal tensions in the region.

However, according to doctors, the cows had died due to poisoning. Zahid, 20, a resident of Botengo village in south Kashmir, was critically injured in the attack along with Showkat Ahmad, the driver of the truck.

In the week that went by, Sudheendra Kulkarni, writer and an organiser for the launch of a book written by Pakistan’s former foreign minister Khurshid Mahmud Kasuri, had his face covered in black ink after an attack by Shiv Sena protesters. 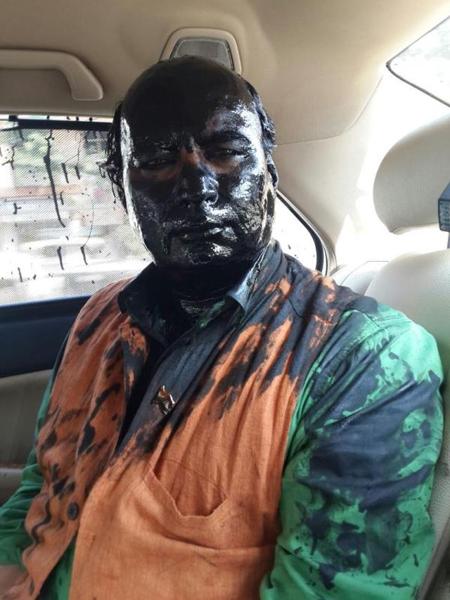 The attack on Kulkarni came just days after the Shiv Sena managed to get the concert of Pakistani singer Ghulam Ali cancelled in Mumbai.

The above developments all come as a Muslim man was lynched to death in Dadri, UP, over rumours that his family ate beef. The meat in question was later identified as mutton, but not before Mohammad Akhlaq had been killed and his son critically injured, with politicians blaming the victims for the violence!

The Sanghis, as I see it, have officially lost the plot!