Why We Must Pay Attention To Inequality For India's Development

Development – a word that gained momentum as the primary consideration during elections and the ultimate end during policy making by the government. We are all taking actions for the ‘development’ of India – may it through the vote that we cast, through our inclination towards a certain degree of openness of the economy, or even through our support for certain points of the Union budget (such as, reduction of corporate tax – the only point in the large 14 category document that the media and public decided to pay attention to). With all the hullabaloo around development, have we truly paid attention to what it really means? It seems that as a country we are narrowing development down to simply economic growth, measuring it by Gross Domestic Product, and basing our strategies and actions in our conquest of increasing growth. Ergo, development is equivalent and limited to economic growth.

While there is nothing wrong in undertaking policies that surge GDP, the opportunity costs forgone in this one-dimensional pursuit must be given consideration. Development is not circumscribed to economic growth, and is indeed an amalgamation of various factors that improve standard of living. As Amartya Sen rightly frames it, development is freedom. It is ‘a process of expanding the real freedoms that people enjoy… Growth of GNP or of individual incomes can, of course, be very important as means to expanding the freedoms enjoyed by the members of the society. But freedoms depend also on other determinants, such as social and economic arrangements as well as political and civil rights” (Sen, 1999:3). Keeping this definition in mind, a significant vile in India that needs attention and remedy for true development is inequality.

Inequality is a multifaceted evil that has intrinsically damaged the Indian economy and society. In India, inequality is not circumscribed to merely income disparities - it expands across the different domains of the community and spills in the social and political spheres. There are important differences in human well being among citizens. Exclusion, exploitation and symbolic violence are exercised over individuals and groups belonging to different social classes, gender, castes and ethnic groups. For instance, data reflects that in India, the poorer section has lower level of educational attainment and life expectancy, patriarchal norms lead to discrimination of women from public sphere, and imposed inferior social status of individuals from certain castes excludes them from participating and adequately contributing to the community. Evidently, inequality through its various faces – gender, spatial, caste, religion, income – has dampened our society and needs to be rectified. However, for the sake of limiting argument, this article will concentrate only on income inequality.

Post 1991, India saw rapid economic growth averaging 7.45%. However, in the same period, Gini coefficient increased from 0.33 in 1990s to 0.37 in 2000s, highlighting that the growth was accompanied by rising inequality. The quintile ratio (an indicator that reflects the ratio of expenditure per capita of the richest top 20% of the population and the bottom 20%) increased from 4.8 to 5.7. Today, the top 5% of the population owns 21.3% of the national income. The escalation of the concentration of income could not be more glaringly obvious – in India the elites have captured most of the fruits of growth, while the poor remain poor.

Evidently, income inequality of an extreme degree exists in the country. What now needs to be bought to the table is the fact that inequality matters and plays an integral role in hindering development. The negative repercussion of income disparity on the economy affects not only the poor but also the rich.

Firstly, contrary to oblivious wisdom, it hampers sustainable economic growth. Early research argued that there was a trade-off between equality and efficiency because, supposedly, reducing inequality would affect the incentives to invest/ work. However, more recent research contradictorily shows that inequality affects both the level and duration of economic growth. Harvard economists have demonstrated that higher levels of income inequality are correlated with lower growth rates. Similarly, robust research by IMF has consistently shown that countries with higher levels of income inequality have less capacity to sustain long periods of rapid economic growth. Thus, the impact of reducing inequality has a tangible and measurable effect on growth sustainability. For example, data shows that moving from a Gini coefficient of 40 to 37 increases the length of sustained growth periods by 50%. 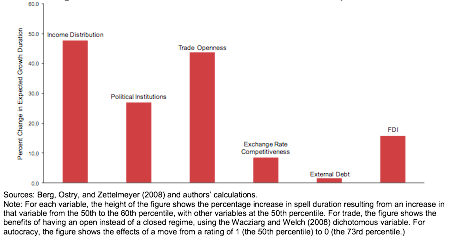 As Figure 1 highlights, income distribution plays a larger role in affecting sustainable growth. Yet, India is concentrating more on factors like FDI, which according to research plays a much smaller role relatively in amassing growth.

Secondly, inequality matters because it represents a barrier to reducing poverty and goodness knows that India, being the home of one-third of the worlds poor (according to World Bank estimates), needs to remove all such barriers. If the benefits of economic growth are captured mainly by powerful elites, inequality becomes an important barrier to overcome absolute poverty. If Asian countries, with India playing a dominant role, had kept unaltered their levels of inequality during 1990-2010, approximately 240 million additional people would have moved out of poverty, considering the high rate of economic growth experienced in that period.

Income inequality is detrimental to development, and distinctly so. The three prominent drivers of inequality in India include regressive taxation, unequal educational access, and unequal access to healthcare services. Unfortunately, our policies through the 2015 Union Budget embedded these three drivers by increasing service tax (a regressive tax) and reducing government expenditure on healthcare and education. It is important that India starts aiming for development not through a one-dimensional growth approach, but a multi-dimensional approach amalgamating growth and equality. As the general public, we must, in the future, not only concentrate on the positives of the 5% reduction in corporate tax announced in the budget, but also distillate on the negatives of the 5% reduction in government health expenditure. It’s only through equity enhancing taxation policies and increased public expenditure on education and healthcare (to improve access and quality) that inequality in India can be diminished and development as freedom can be achieved.

(Jaskiran Bedi is a PhD Researcher at the University of Cambridge. Her research area focuses on Institutions in India, Growth study, and the Political Economy of Education).