Peace In The Time Of Paris

Flowers And Candles Win In The End

NEW DELHI: It’s been a week since the dreadful attacks in Paris that claimed over 130 lives. In the midst of profile picture changes and status updates, the voices for peace, love, compassion and coexistence have prevailed. As Anton Leirus, a man who lost his wife in the attacks, wrote in a moving tribute on his Facebook page: “you will not have my hatred” as he declared that the way to fight back was to “not give [the gunmen] the gift of hating.”

In another viral video, an unnamed blindfolded Muslim man stood at the Place de la Republique in Paris, and said, “I'm a Muslim, but I'm told that I'm a terrorist" and "I trust you, do you trust me? If yes, hug me.” And the Parisians hugged him tightly.

My personal favourite is a video by French media outlet Le Petit Journal, wherein they interview a young boy who responds to the question, “do you understand what happened?” with “yes, because they’re really really mean.” The father then tells his son that the mean men can be defeated with flowers and candles. It’s not the words as much as the relationship between the father and his son, and the teachings of peace and coexistence, that made me shed a tear or two while watching their exchange.

Here are the three videos:

A man’s beautiful tribute to his wife 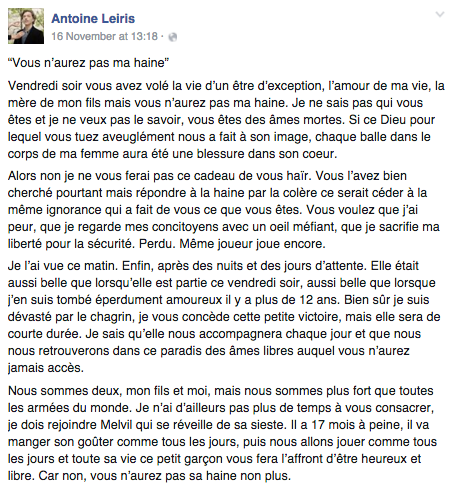 At the time of writing, it has been shared more than 222,000 times. "I saw her this morning. Finally, after days and nights of waiting. She was as beautiful as when she left this Friday night, as beautiful as when I fell in love there are more than 12 years. Of course I am devastated by grief, I grant you this small victory, but it will be short lived. I know she will accompany us every day and we will be in this paradise of free souls that you will never access. We are only two, my son and I, but we are more powerful than all the world's armies..." “You will not have my hatred,” Leiris defiantly said.

An important message from a Muslim man

Near mourning sight at Place de la Republique an unknown man drew much attention by blindfolding himself and putting out two signs reading “I’m a Muslim, but I’m told that I’m a terrorist” and “I trust you, do you trust me? If yes, hug me.” The result will move you to tears.

This moving exchange between father and son

“They have guns, they can shoot us because they’re really really mean daddy,” the boy tells his father about the gunmen. “They might have guns but we have flowers,” the wise father replies. “The flowers and candles are here to protect us,” the little one says, having learnt something that will go a long way in his life. “Do you feel better now?” the interviewer asks. “Yes, I feel better,” says the boy, proving that flowers and candles do indeed win in the end.