NEW DELHI: Sanjay Rathod, IT cell convener of BJP’s Junagadh unit, took to Twitter to make an open threat and offer a bizarre “solution” to the controversy over the arrest of several Jawaharlal Nehru University students.

“Shoot Anti National JNU students & Proff and close the chapter. But the problem is that Our Govt doesn’t allow to kill Dogs #WakeUpIndia,” Rathod tweeted, only to later delete the tweet.

A few minutes before the above tweet, Rathod posted: “#Wake-UpIndia or it will be too late. There are big forces who want to break India. They are funding #antinationals & paid media.” 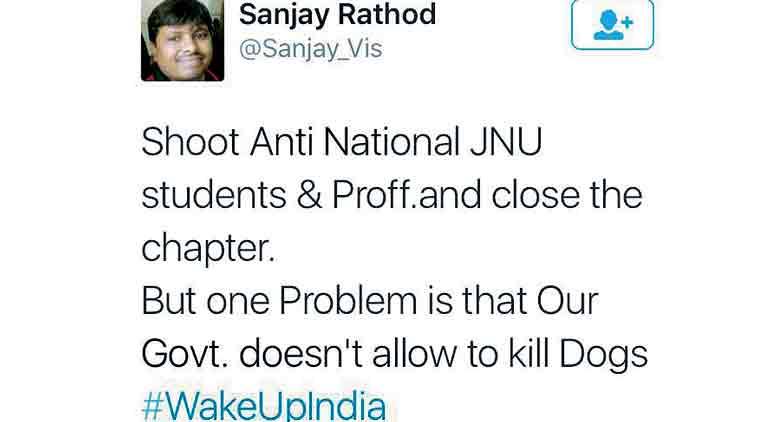 Rathod’s tweet comes just a day after police arrested a man allegedly behind posters offering a Rs. 11 lakh bounty for JNUSU President Kanhaiya Kumar. Adarsh Sharma, who claims to be President of an organisation he calls the Purvanchal Sena, stuck the incidianary poster across the capital city. The poster said, "Whosoever shoots JNU Students' Union president and seditionist Kanhaiya will be rewarded Rs. 11 lakh on the behalf of Purvanchal Sena." It carried the mobile number and name of Adarsh Sharma, identifying him as the president of Purvanchal Sena. 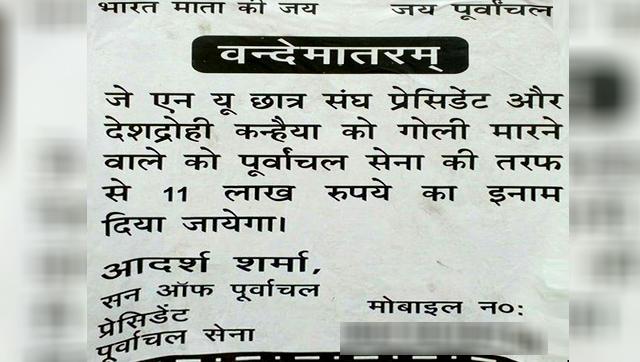 Further, BJP youth wing leader, Kuldeep Varshney, offered Rs. 5 lakh to anyone who cut off Kumar’s tongue. Varshney was, however, expelled from the primary membership of the party for six years following the comment.

Despite the strict action, Rathod clearly wasn’t deterred when he took to social media to make a threat against Kumar. No action has yet been taken against Rathod, who seemed to stand by his threat even after deleting the tweet. “As a BJP member, I am supposed to express my opinion and counter views opposed to my party. I am also supposed to support those supporting our line of thinking,” Rathod was quoted by the media as saying.