Bhogle, who has long been associated with cricket commentary, told the media that he was unaware of the reasons behind the BCCI’s decision. “No one told me anything. I have not been formally told of the reason even now. All I have been told is ‘it is a BCCI management decision’,” said Bhogle as quoted by The Indian Express.

Although no official reason has been given, a hint lies in what an anonymous official told the same newspaper. “When deciding the commentators, we take feedback from everyone. We monitor social media reactions on commentators, and also take inputs from players.”

“With all due respects, it would be really worthy of an Indian commentator to speak more about our players than others all the time,” Bachchan had tweeted on 24 March. 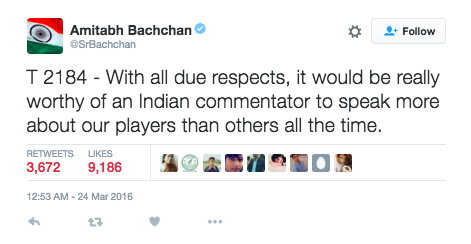 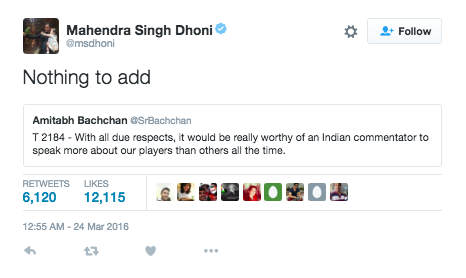 Harsha Bhogle, in his response, said:

“I must confess to being a bit taken aback by the intensity of the criticism yesterday over the question of focussing more on Indian players during the telecast. It emerged after a tweet from Mr Amitabh Bachchan, someone I admire enormously for the dignified way in which he has always conducted himself. The assumption among some people was that he was referring to me and while I don’t know if that is true, it did strike me that there seems a slight misconception about the role of a commentator in a telecast. I will try and clarify here.

I have, incidentally, sent Mr. Bachchan a DM on twitter offering an explanation (in passing, the fact that he follows me gives me a great buzz!).

There are two kinds of broadcasts available to Indian viewers. One, on Star Sports 1 is the world feed. That is the telecast, and commentary that goes to everyone around the world. That includes, passionate fans in Bangladesh and Pakistan, in South Africa, Australia, England, the USA, everywhere. That broadcast must necessarily be an objective, balanced portrayal of events. Making that excessively India-centric means being unfair to other teams playing and to viewers from their countries who have the right to be as passionately involved as Indian supporters. And so, talking more about India, in a game like yesterday’s, would be letting down viewers in, say, Bangladesh.

But the viewer must get insights into either team and so producers have commentators from each country who can draw a better picture of the players, and of the sentiments of their land.”

Despite the clarification, Bhogle was sacked.

So, the question is -- was Bhogle sacked because Mr. Bachchan and Mr. Dhoni criticised him for not focussing on Indian players, when Bhogle himself clarified that making international commentary India-centric goes against the principles of the job? 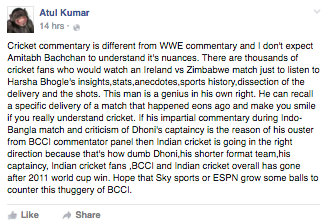 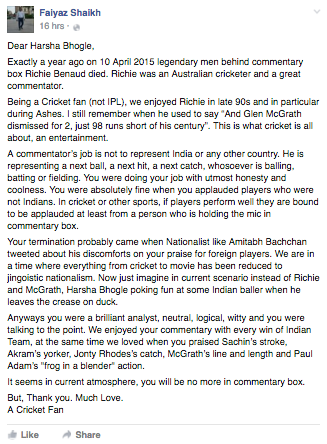 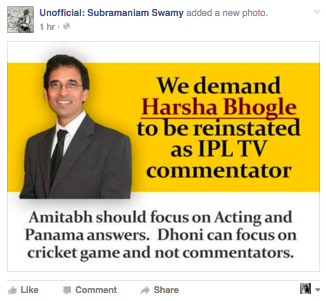