NEW DELHI: The Delhi Metro Rail Corporation (DMRC) has courted controversy as a sign board showing an advisory prohibiting “mentally ill persons” from using the capital city’s mass transit system is being circulated on social media.

Along with diseases such as cholera, scarlet fever, chicken pox, mumps, the DMRC instructs that “mentally disturbed persons” shall not travel in the Delhi Metro. 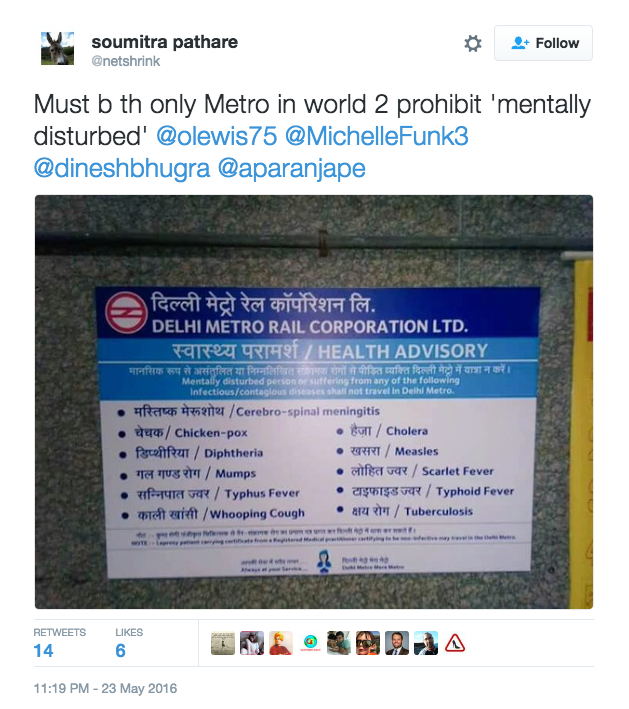 The advisory adds that leprosy patients with a certificate from a registered medical practitioner saying the disease is non-infective, can travel in the metro. It was first spotted at the Hauz Khas metro station.

“This is discriminatory and shows Delhi Metro’s ignorance. It is not acceptable at any cost. This has come at a time when the Supreme Court has passed a judgment in favour of an activist with cerebral palsy. He was offloaded from a plane four years ago,” said Naveen Kumar, trustee and psychologist at Manas Foundation, an organisation that works in the field of mental healthcare (a told to HT).

Sunil Kumar Aledia, who runs an NGO called Centre for Holistic Development (CHD), lodged a complaint with the Hauz Khas station controller regarding the advisory.

He told HT, “I was disgusted to see such a poster issued by the Delhi Metro Rail Corporation, which is considered to be a sensitive organisation. How can they discriminate against people on the basis of disease? If they don’t want sick people to board the Metro, then they should shut the stations near hospitals." “This is another example of people being unaware about the ‘mentally disturbed’ condition. If they are concerned about security, then they should know that it is mostly ‘normal persons’ who are violent. I have never seen a ‘mentally disturbed’ person attack someone. Not just on Metro, but discrimination should end everywhere,” Aledia added.

““We as a society must create an environment where everyone has equal rights. You cannot ask someone not to use the Metro just because he is mentally disturbed or carrying some disease. When I complained, the station controller asked me if I would like to travel with an infected person? We need to change this mentality,” he said.

In fact, Leprosy Mission India posted a detailed Facebook note that said, “As per Delhi Metro Operations and Maintenance Act, the Delhi Metro Rail Corporation (DMRC) has issued an advisory and displayed it in various metro stations across the city. Among other guidelines, it mentions that people affected by leprosy will be allowed to travel in Delhi metro only if they have a certificate from a registered medical practitioner, stating that they're non-infective.

People affected by leprosy become non-infective, once they take the first dose of Multi-Drug Therapy (MDT), which completely cures leprosy.

If DMRC aims to protect the health interests of its clients/commuters, it should educate them on leprosy and it’s facts so that the public misconception about leprosy is removed. An influential body like DMRC, by introducing such policies is unknowingly encouraging discrimination against people affected by leprosy. This cannot be allowed. People affected by leprosy also have equal rights guaranteed by the Constitution of India.” 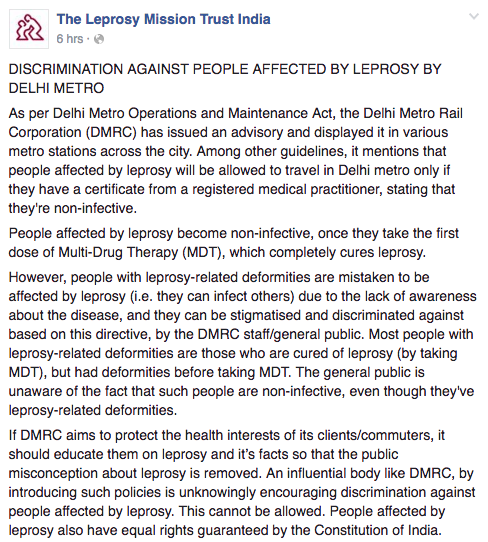 Officials representing the Delhi Metro, however, did not think the advisory was unwarranted.

“These are old regulations in place as per the Delhi Metro Operations and Maintenance Act. No new rule has been created by the DMRC. Similar rules are also in place at other transport systems,” an official told HT.