NEW DELHI: Najeeb Ahmed is missing from the Maha Mandavi Hostel at Jawaharlal Nehru University, says a statement issued by JNUSU President, Mohit K Pandey. Police say that Ahmed, who is a member of the All India Students' Association (AISA) went missing following a brawl with members of the Akhil Bharatiya Vidyarthi Parishad (ABVP), with a case of kidnapping and wrongful confinement having been registered at the Vasant Kunj police station.

Students have put forth conflicting accounts, with ABVP members stating that Ahmed had slapped one of their campaigners. The ABVP has filed a separate case against Ahmed.

“In a shocking incident, Najeeb a resident of Mahi Mandavi hostel was threatened, intimidated and gravely beaten up by a group of people mobilized towards communal hatred and violence by an ABVP activist. It is shameful how the lumpen hate-mongers of RSS-ABVP have been given a free reign to unleash their hateful and divisive propaganda in our campus!

An ABVP activist Vikrant, while on a campaign in Mahi Mandavi hostel late last Friday (14th October), had a confrontation with Najeeb. Vikrant summoned a throng of people, inciting communal hatred against Najeeb and creating an atmosphere of panic and violence. The group of goons, assembled at the beck and call of the ABVP activist, proceeded to intimidate and physically threaten and beat up Najeeb. The mob mentality incited by communal rage drove Najeeb to hide in the bathroom. As people tried to intervene and help, the lumpen group continued to hurl abuses and intimidate Najeeb. As the JNUSU President tried to accompany Najeeb to the hostel warden, the men assembled were not deterred from lashing out and hitting Najeeb, even in full view of the warden.

It is with utter sorrow and a full sense of urgency that we inform the JNU community that Najeeb has been missing since last night. His family is here trying to look for him and concerned for his whereabouts as he was already dealing with stress. They need our support and solidarity to come forward and fight against this hateful propaganda and fear. Further, we must be vigilant against the miscreants who have written on a table in the guest room of the hostel that “Muslims are terrorists”!

We demand the JNU administration to immediately file an FIR with the Delhi Police and take every step to find and bring back Najeeb. The Mahi Mandavi hostel warden, who himself was a witness to Najeeb being beaten up, must take the most stringent action against the perpetrators and bring them to task. It has been two days now and we have approached various authorities but to no avail. It is shameful that the JNU administration has not taken a single step in this regard. We will not tolerate communal hatred and violence on this campus, we will not give in to the forces trying to shrink our spaces and run our campus on their divisive whims and fancies. JNUSU appeals to the student community to remain vigilant to reject any kind of communal hatemongering and push the JNU administration to take urgent actions to immediately bring back Najeeb."

“Some really serious incidents have been reported from Mahi-Mandavi Hostel. A student named Najeeb was beaten up by a group of sanghi goons around Friday midnight. It all started with a scuffle between two group of students, but then the sanghi goons mobilized an entire group to avenge it and lynch him. All those who tried to save him, including the warden, JNUSU President and hostel residents also got beaten up. From next morning, I.e. from Saturday, 11 am this student has been missing. Last night his family members filed a missing persons complaint with the police but he remains untraceable. It has been almost 36 hours since he has gone missing but the administration has simply not taken up the issue with the police or punished all those sanghi history sheeters who assaulted him. There is a protest called right now by the JNUSU at north gate demanding the JNU administration to immediately take up the matter with the police from the university's side. Appeal to the campus community to join the flash protest.

Meanwhile, there are attempts to communalize the situation in the hostel. Someone has written on a table in the guest room of the hostel that 'muslims are terrorists'. As a campus community, we need to stand up against such attempts and demand that perpetrators of violence are brought to book and we are able to trace Najeeb.” 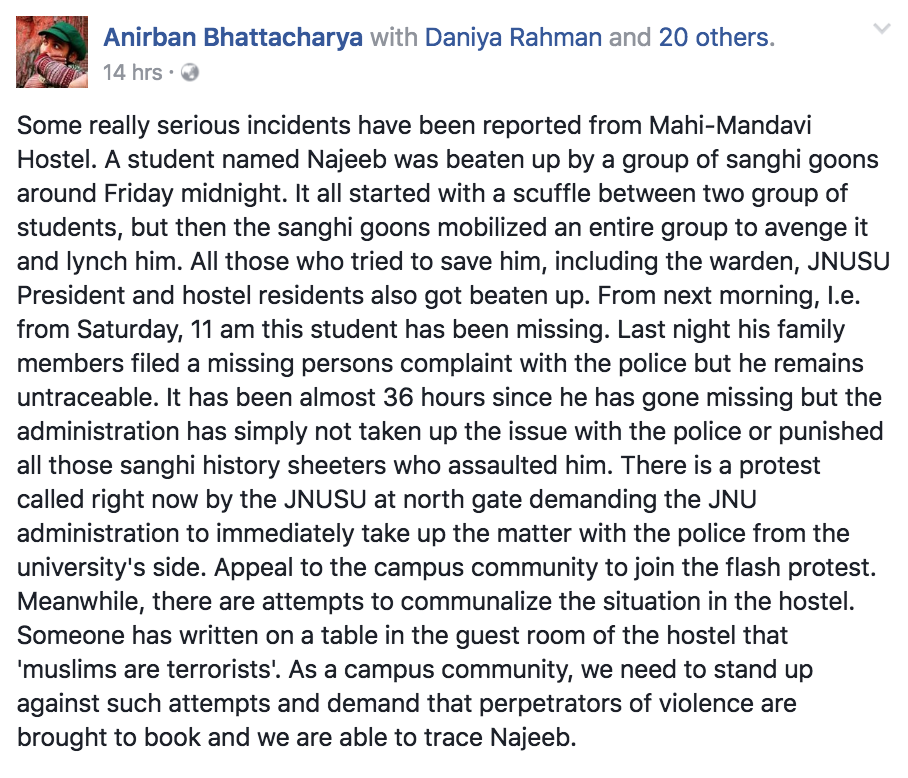