At the time of writing, despite the fact that hundreds of students had marched in protest of police and administrative action relating to locating Najeeb, there is no trace of the missing student. What we do know is that Najeeb’s went missing on 15 October, after being brutally assaulted in his hostel by ABVP members. The ABVP -- who deny any hand in Najeeb’s disappearance, say that it was Najeeb who started the scuffle and have as such, filed their own FIR with the police. The administration has refused to file an FIR, with students coming out in large numbers to protest that administration’s lack of action and apparent attempt to shield the ABVP students who led the attack on Najeeb.

In the latest developments, the Delhi Police has said that Najeeb likely went to Jamia Millia Islamia after he left JNU on the day he went missing, and have apparently traced the auto driver who ferried him. Why Najeeb left without his slippers and phone remains a big question.

Former JNUSU Vice President Shehla Rashid said, “The people who assaulted Najeeb are roaming freely, and threatening the eyewitnesses. No action has been taken against them. They have not even been interrogated by the police. When the 9th Feb slogan shouting incident took place in JNU (which had no victims), 8 students who are leading Left activists were academically suspended for a month without any enquiry, within a few hours of the constitution of a so-called 'High-Level Enquiry Committee'. The JNUSU President, Kanhaiya, was arrested within days of that incident. By contrast, in Najeeb's case, a month has passed, but no action has been taken, either by the administration or by the police. Do they act only under media pressure? Where is the rule of law? Where is the concern for the missing student?” 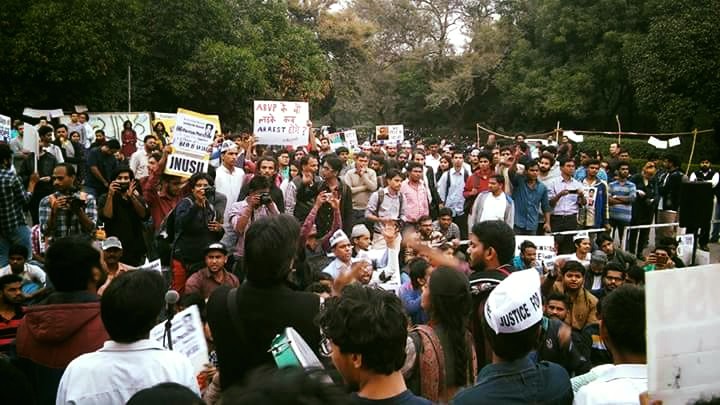 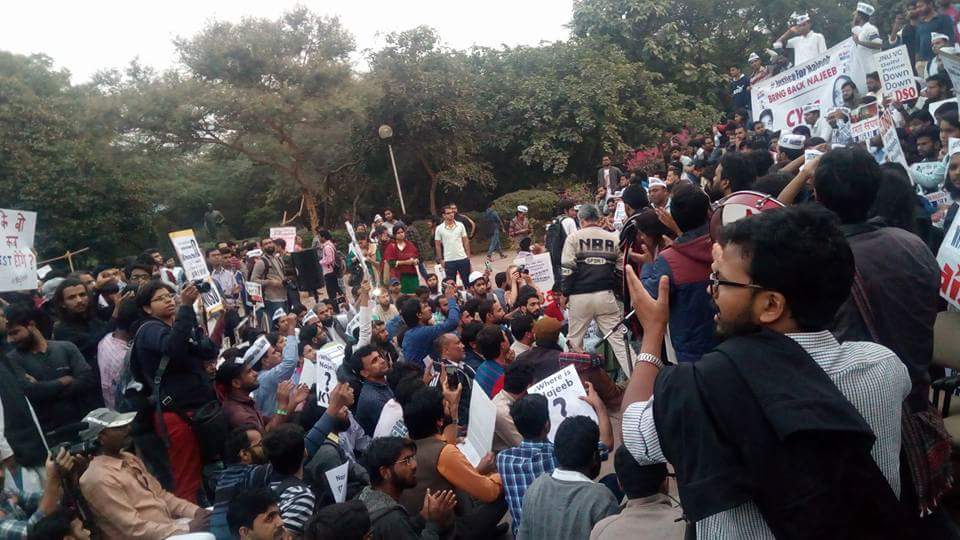 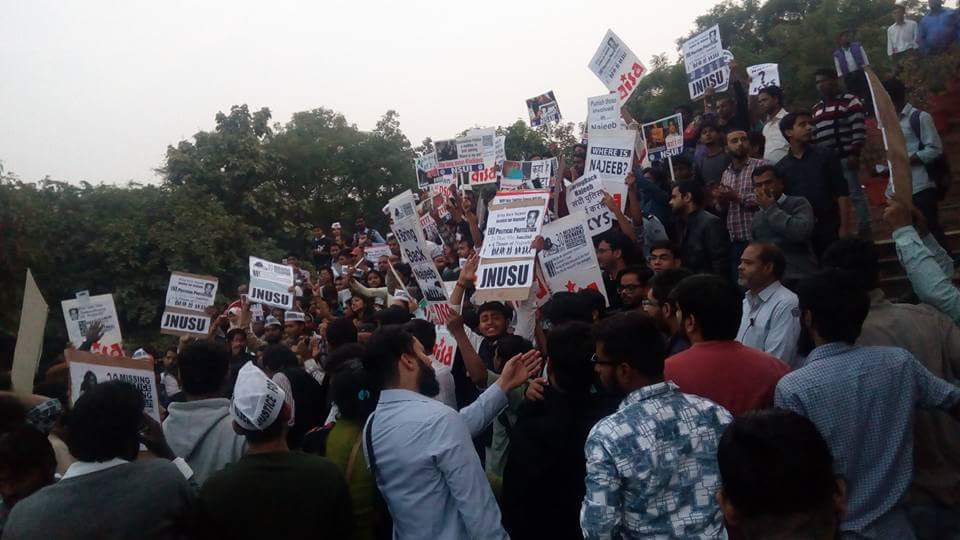 (Scenes from the November 15 #ChaloJNU protest)

A statement issued by JNUSU said:

“Friends, on 14th October night, Najeeb Ahmed, a student of M.Sc. Biotechnology, JNU was brutally assaulted and violently threatened by a group of ABVP students. From 15th October morning, Najeeb went missing from the campus. The disappearance of a student from a central university in the national capital after assault and intimidation of right wing lumpens is no doubt an ominous reflection of the dark times we are living in. For past four weeks, students, teachers, staff members of JNU, and citizens of Delhi have been coming out on the streets demanding institutional accountability to bring back Najeeb.

Abdication of Institutional Responsibility and Partisan Role of JNU VC

What is absolutely shocking and shameful, is the partisan role of the University administration in the whole affair. Why has the twitter-savvy JNU VC never issued an appeal to Najeeb assuring him safety and justice. Why has the JNU administration has not taken action on its own nor filed any complaint with the police regarding the assault on Najeeb? Why does none of the University press releases mention the vicious attack and intimidation against Najeeb?

On the contrary, the JNU administration is stooping to the lowest levels by repeatedly issuing show-cause notices and threat letters to students involved in the movement for Najeeb.

Grave Acts of Omissions and Commissions by the Delhi Police

The Delhi police did not allow Najeeb’s mother to mention the incident of assault on Najeeb in her FIR (which now stands as a simple FIR of kidnapping, against unknown persons).

Further, the Delhi Police did not undertake immediate and mandatory steps like -tracking vehicle entry records particularly all auto rickshaws that plied into JNU, tracking CCTV footages in Metro stations and of course, ignored immediate search in the forest areas of JNU with sniffer dogs. Search in forest areas was done only weeks later and that too after students’ protest.

The JNUSU and other eyewitnesses also filed a police complaint naming the persons who assaulted and threatened Najeeb. But it is utterly appalling that the assaulters named in the complaint have still not seriously interrogated nor have their call records been investigated so far. All these omissions and commissions by Delhi Police gravely compromised vital clues and damaged the search and investigation process.

On the contrary, Delhi Police marshalled all its forces to unleash repression Najeeb’s mother, family members and student protesters demanding accountability from the Delhi Police.

And now, following massive protests during last week, the Delhi Police is churning out misleading media feeds, simply to divert attention from its own omissions and commissions.

A student from a minority community goes missing from the university, his assaulters roam scot free and the university administration – police – ruling government remain mute spectators. Yesterday it was Rohith Vemula pushed to suicide, then it was JNU students charged with ‘sedition’ and jailed, today it is Najeeb, tomorrow it may be any of us. From HCU, BHU, DU to JNU, everywhere the same pattern is emerging- the RSS-ABVP goons under full patronage of university administrations and the BJP government get away with each and every vicious attack across campuses, and Dalits, minorities and dissenting voices are intimidated, harassed and even institutionally murdered. The government of the day has waged a war on campuses and on all marginalized sections and dissenting voices across the country.”

The students of Mahi-Mandavi Hostel, from where Najeeb went missing, put forth their account of the developments to the warden in a letter:

“We the undersigned residents of Mahi-Mandavi hostel would like to draw your attention to the attack on Mr. Najeeb Ahmad (a resident of Room no. 106) Mahi hostel by a group of students including:

Mr. Najeeb Ahmad was in his hostel (room no. 106, Mahi) when Vikrant Kumar along with Ankit Kumar Roy went for campaign. At this time it seems there was a scuffle between Najeeb Ahmad and Vikrant Kumar, at this juncture Vikrant and Ankit called and mobilized a group of students (as mentioned) who attacked Najeeb Ahmad.

In order to save Mr. Najeeb Ahmad we along with security guards took him to washroom and blocked the entrance to save him. At this time hostel senior warden, Dr. Sushil Kumar came near the washroom followed by JNUSU President Mohit Kr. Pandey.

We along with warden and rest of the residents were bringing Mr. Najeeb Ahmad to the warden office on the ground floor. The group (including Vikrant, Vijender, Ankit kr. Roy , Aishwarya Singh and others as mentioned) attacked him like: Ankit kr. Roy attacked with his hand on his head and face, Vikrant attacked with his legs, Vijender attacked with his hand kada and other as mentioned above used their fists and legs while we tried to save him in the presence of Dr. Sushil Kumar, senior warden, JNUSU PRESIDENT Mohit Kr. Pandey and University g4-s security personnel apart from other residents.

When we came to warden’s office, where, in the presence of Senior warden, Dr. Sushil Kumar and other two wardens, Dr. Somyjit Ray and Dr. Arun Srivastava , the same group of students gave life threat to Mr. Najeeb Ahmad, like:

Abhijeet said- “Sir isko hamare hawale kar dijiye, subah tak yeh jinda nahi rahega”. Sir koi complaint mat likhiye, ham dekh lenge”. Chat se neeche phek denge, aur dekhte lenge kaun kya kar lega.” (Sir just give him to us, we will not leave him alive, we don’t want any complaint, we will handle by ourselves, we will throw him from the roof and then we will see what anybody do to us). And they abused in the name of mother and sister like: Vijender said: “Madarchod, behenchod tumahari aukat kya hai (Motherfucker, Sisterfucker, we know who you are). 72 huron ke paas bhej denge (we will send you to 72 virgins). “Maro salon mullon ko aur katuon ko (beat all the mullahs and derogatory word for Muslim).

In this regard we would also like to bring to your notice that Mr. Najeeb Ahmad is missing from the hostel since around 11: am, 15/10/2016. We urge you to immediately file a missing complaint with police as he was already threats last night with life threats. We also urge you to immediately take action against the above mentioned students who have attacked Mr. Najeeb Ahmad which might have caused grievous injuries to his life and limbs. We also demand that in your capacity as University officials peruse the matter with Delhi Police and other investigating agencies immediately, so that he could be traced.”