NEW DELHI: What’s in a name? Well, Twitter trolls and abuse are part of the answer if you’re Kareena Kapoor or Saif Ali Khan. The couple’s newborn child -- named Taimur Ali Khan Pataudi -- has become an internet sensation for all the wrong reasons. Although the parents have not commented on the significance of the name (after all, isn’t it their business and their business alone?) Twitter has been characteristically vocal in slamming the choice of name.

Many have assumed that the child has been named after Timur -- a Turco-Mongol conqueror and the founder of the Timurid Empire in Persia and Central Asia. #TimurAliKhanPataudi therefore, became a top trending hashtag the moment the little one was born. And instead of congratulatory messages, vile abuse -- in true Twitter style -- was attached as many protested what they say is a homage to the “Hindu-killing” invader Timur.

Of course, the fact that these people have never read a history book and have no understanding of the historical context of Timur’s invasion of what we now call “India” didn’t stop them from becoming overnight experts. For the record, there was no political entity known as “India” at the time (the 14th century), and Timur’s armies attacked Hindus and Muslims (and people of other religions) alike. In fact, one of the final battles Timur had in the territory that today is modern-day India, was against the armies of Sultan Nasir-ud-Din Mahmud Shah Tughluq.

And elsewhere, Timur fought Muslim rulers in Muslim kingdoms and Christian rulers in Christian Kingdoms. In 1399, he fought with Bayezid I, sultan of the Ottoman Empire, and the Mamluk sultan of Egypt Nasir-ad-Din Faraj. In 1400, Timur invaded Christian Armenia and Georgia.

In this empire lived Hindus, Muslims, Christians, and people of all other religions (not to mention sects and subsects).

To see Timur as a “murderer of Hindus” is a gross historical fallacy. To see him as an invader of “India” is another -- as India as a political entity is a modern day construct, and nothing of the sort existed in the 14th century, when the land that corresponds to modern day India was divided amongst warring kingdoms.

Additionally, let’s not forget that conquerors in the 14th century cannot be seen through the prism of the 21st century. Damming a political ruler for being a conqueror in the 14th century is like damming a modern day politician for contesting elections. Or it’s like damming Alexander the Great, or Napoleon -- all of whom have a questionable record if we go by today’s understanding of political right and wrong.

And if none of my above arguments convince you, sample this: Alexander The Great was a conqueror… he came to India and fought many wars and killed many people, just as Timur did. Yet, the name “Sikandar” (after Alexander) is a very common Indian name. I don’t think there would be any outrage had the baby been named “Sikander Ali Khan Pataudi.” My point is, both Alexander and Timur are products of their historical context, and any analysis of their political motives has to be located in that context.

But what’s the point of historical context, when in the age of Twitter, everyone and their uncle is an expert?

(PS: As you read the tweets below, remember the words “historical context.” There’s a difference between a conqueror in the 14th century, and false points of comparison -- namely Nathuram Godse, Hafiz Saeed or Osama Bin Laden, all of whom are contemporary, politically speaking, personalities)

(PPS: Don’t let the hate and ignorance shock you, it’s Twitter after all. This is the new normal).

(PPPS: We don’t even know whether the kid was named after Timur or not). 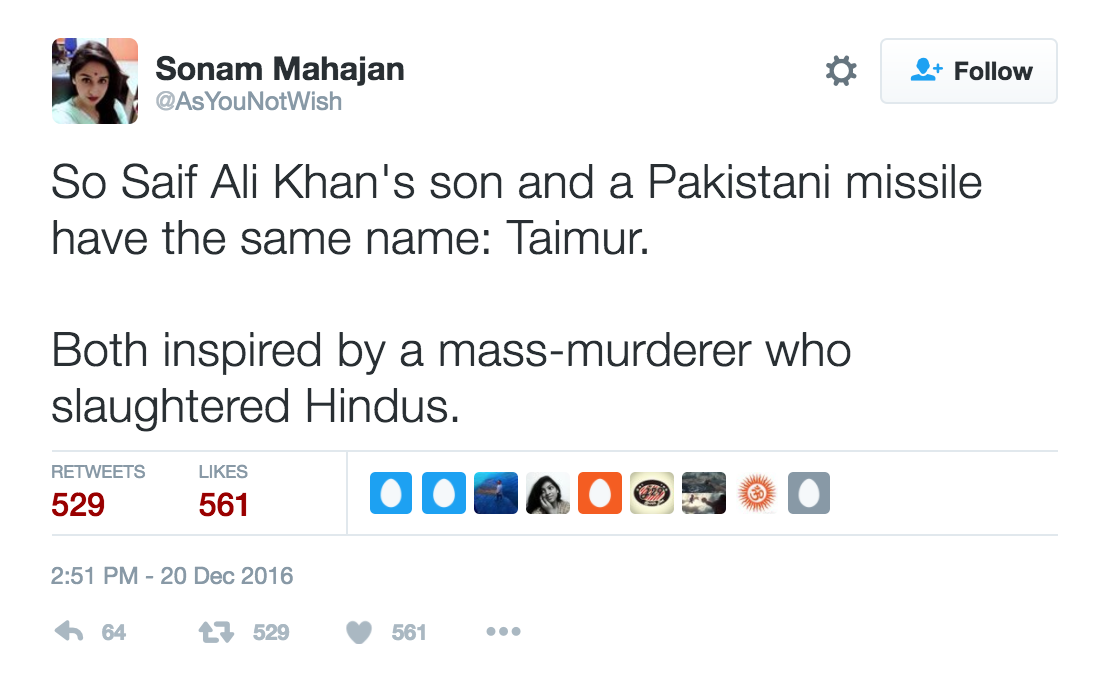