The recently concluded 9th Bengaluru International Film Festival gave its top award, Best Asian Film, to the Kyrgyzstan film ‘A Father’s Will’, a reflective and moving study of changing landscapes of life in today’s unsettled world.

Its directors, Bakyt Mukul and Dastan Zhapar Ululu along with lead actor Iman Mukul, attended the festival. The film is about a young man Azat, who migrated to the USA some fifteen years ago. He now flies back to Kyrgyzstan to his family village. His father, Murat, had died in America a year ago. The son returns to carry out his father’s last wish, which was to restore to his country what he had taken from it.

Q. ‘A Father’s Will’ leaves one humbled and respectful of far-flung communities that honour their people and their traditions the film has literary over tones to it. Is it an adaptation?

A. The film is not based on a historical or romantic story. It is original, specifically set in the Kyrgyzstan of today where migration poses a serious threat. Many families leave, never to return, prone to western influences that are indifferent to inherited traditions or customs. For such a small population, this is detrimental. The story follows a brave young guy who returns home knowing the villagers would be hostile to him. His task is to bury the ashes of his father. Everyone yearns to go back to where he was born and raised – the land of his ancestors


Q.The film has high standards in every aspect - its unfolding of the story, elemental camerawork, impressive compositions and subtle acting (you in the central role) –Is cinema in your country that advanced now?

A. The Kyrgyz film industry developed and gained some festival recognition under the Soviet regime. When that ended in the 90s, the Kyrgyz film was in decline. We are back now again making a mark internationally – such as winning the top Asian award at Bengaluru. Earlier our film industry was not close to other countries. But now we are ready for big joint projects. Culturally we are very cosmopolitan with a strong theatre tradition, our own national ballet and opera. But here too commercial cinema dominates- it does not educate people nor allow the development of the human mind and soul. But there are enough directors now who work differently. My father Bakyt Mukul, who co- directed the film with Dastan Zhapar Ululu, is an example. His team took three arduous years to make the kind of film they believed in. They worked hard on its artistry.


Q. Are you a trained actor? It would seem so with the high degree of control and sensibility that your role demands – the whole film develops like a pyramid around you. Did you audition for it?

A. This is my first film as an actor. By profession I am a ballet dancer learning it from my childhood. But ballet can transition into acting – it is a performing art. And fortunately I was born into a family of actors. I hope now to get roles in films that are as challenging.

My father (the director) looked at several known actors for this role. Then I was asked to play in the film. The role for me was very interesting because it is anti-hero. Here is a returned prodigal, rich and alien looking, who comes to win back his father’s honour and pay his debts. My role is understated and minimal, and also somewhat negative till almost the end. I prepared for it a whole year, paying minute attention to modify body movement facial expression. The filming was easy. The preparation very tough. But my affinity with the director helped and the shoot went smoothly. For myself, I love it when the director has the trust and love to let me play the role the way I want to. 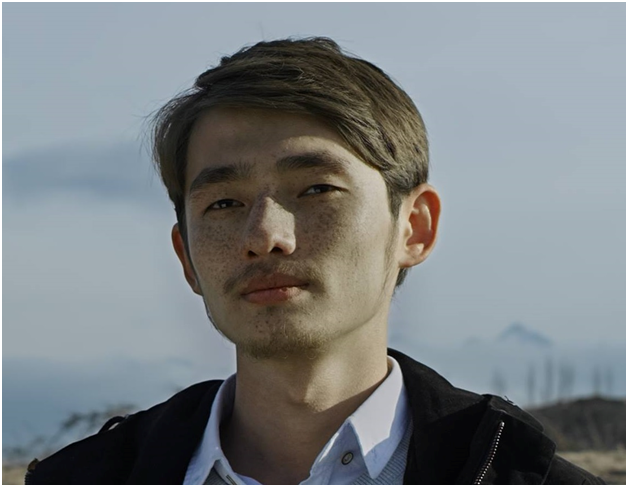 The rural landscape and the simple, outdoor farming lifestyle of your village is presented strikingly. Yet, like everywhere, the young want to escape to the cities or overseas.

In the 1990s, there was little work and people left to make a living in other countries. Over the years, cities developed well and were tempting for the young. The father of the main character also left after taking a lot of money from the villagers to pay for his travels. For me this film helps others to understand the importance of a people, a country and traditions they inherit.


Q,In the film, the initial hostility changes to one of concern over resolving your predicament. How did this change in attiude come about?

A. We are heirs of our own nomadic culture. Our traditions blend with the harmony of nature.

Our country has many nationalities. All ethnic Kyrgyz’s are Muslims and in Islam you can't bury a body’s ashes. But within every religion there is the concept of humanity. The local people bond to honour one of their own. They realise that however devious the father had been, his son had come to clear his name. Every son is a future father and therefore, there is the need to respect and protect elders. With that, the honour of the young too is preserved. At the end, the alienated uncle leaves without saying goodbye. However, it’s clear that their relationship is on the mend. Although saddened by having lost his big, loving family, he feels optimistic ….


Q.How was the film received in your country?

A. Making the film was very difficult because of the lack of finance. There were many obstacles. This was my father’s first film and many were uncertain about how it would fare. However, our film was warmly received by the people even though its concerns are about adult folk which the young do not care about. We are so excited about our Bengaluru award. I am very happy that Indian people have bonded with a common ancient culture and has responded with a deep understanding of our film. I thank you.