Potters Stare At Destitution As Erosion Hits Their Ancestral Art

Tipeshwar Bhuyan, a 55 year old potter from the Majuli riverine island on the Brahmaputra river in the state of Assam in India’s north east is a worried man as he could soon be forced to give up his ancestral trade of pottery.

Bhuyan is not alone. Sumeshar Bora, another potter aged 62 years is facing similar concerns, and is worried that he might lose his age old income source anytime soon.

Both of them are among the over 3500 potters living on the island who practice a unique form of pottery in which a potter’s wheel is not used, and the clay is beaten by hand to give the shape of utensils.

These potters are able to obtain the glutinous clay, required to make these pots, from the bank of the Brahmaputra river and its tributaries.

The process of collecting the clay has become a threat to the island, as, according to the government, it is giving rise to rampant erosion.

For this the government is planning to ban cutting of the earth around the bank for the clay, and this could impact the livelihood of the potters.

According to government figures, due to erosion a huge portion of the island has been lost to the river. Since the past six decades, the size of the island has shrunk from 1,226 square km to less than 576 sq km, and the problem has been catapulted as a result of adverse impacts of climate change which includes erratic rainfall.

“The cutting of the earth for clay compounds the problem of erosion, and that is the reason why a ban on this earth cutting is essential. We have recommended to the administration to take steps to ban earth cutting on the island,” said Deben Sarma, a senior engineer of the Brahmaputra board, which is an autonomous statutory body under the Ministry of Water Resources.

The decision on a complete ban of earth cutting on the island was mooted some years, and though last year the administration had planned to enforce the ban, it was not done keeping in mind the livelihood options of the potters.

“A ban on earth cutting on the island has been suggested by the Brahmaputra board to arrest erosion, and that will be enforced soon to protect the island,” said Keshab Mahanta, Assam water resource minister.

Government officials have however said that alternative livelihood options will be provided to the potters, and one such option is terracotta.

“We have asked the administration to ask the potters to shift to terracotta so that they need not have to cut the earth, and the government would train them in terracotta,” said Mahanta.

Jenifer Yasmin Choudhury, assistant commissioner, Majuli said that both the government and the administration are exploring ways to ensure that the potters are not deprived of income source. 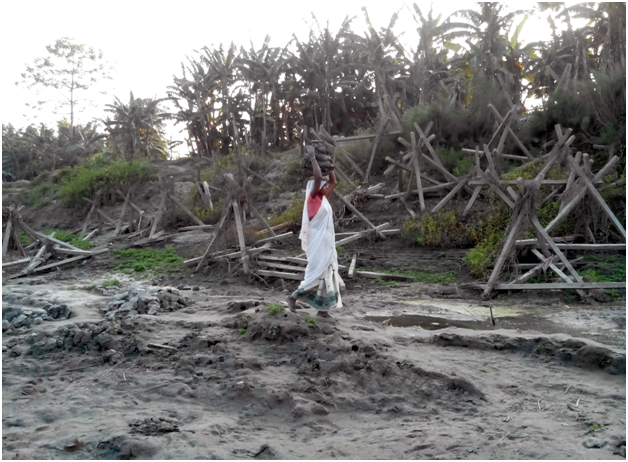 For the clay, the potters dig several wells on the bank of the river—the diameter of each being around 8-10 ft and the depth being around 20-25 ft, and the clay is brought out from these wells. According to government officials, this practice makes the soil loose and susceptible to erosion.

“These pits accelerate bank erosion, and are a big threat to the island,” said Sarma.

The potters have however said that such a ban will impact them severely, as they have been engaged in this trade since generations and now it will be very difficult for them to get absorbed in other livelihood means.

They have also said that they tried to explore other possibilities to get the clay from other places, but it is not feasible.

“We tried to get the clay from the mainland areas, but it is not feasible as we have to hire a boat, and it costs over Rs 2000. Besides that there are other costs,” said Bora.

Bora also said that the potters are also planning to meet officials of the government, and request them for a solution on this.

“We don’t want to give up this ancestral livelihood option,” said Bhuyan.

This unique pottery is practiced by both the men and women in the community. The women prepare the clay lump using their hand and give the shape to the wares, and after that dry it in the sun.

“After the pots are dried, these are baked in a furnace and then allowed to cool and get hardened,” said Pankaj Gogoi, a researcher with the non-profit Destination North East.

After that these ‘wares’ are marketed to different parts of the region.

Majuli, according to Guinness World Records is the largest riverine island in the world, and is India’s first river island district.