FTII third year student Payal Kapadia is the director of the 13-minute short, “Afternoon Clouds”, India’s one official entry in 2017 Cannes. It is the first FTII film to enter and be accepted in the Cinéfondation section in which it is competing. Cinéfondation is open to film schools the world over, its purpose being to foster and encourage new talent.

“Afternoon Clouds” takes place in the course of a single afternoon in the languid stillness of a 70-year-old widow’s home (a role played by Usha Naik), in which she lives with her Nepali maid (Trimala Adhikari) and her cat which she cares for. The maid meets a visiting male friend and then returns to her routine life. “Afternoon Clouds” has a mesmerizing quality that relates to time and relationships. Its colours, design and performances leave an imprint that are meaningful as well as illusive.

Payal Kapadia says the film’s theme was inspired by her grandmother. The film has been shot it in celluloid, which gives it the stronger texture of natural colours. Payal spent a long time preparing the film, exploring ideas about single womanhood pre and post-marriage with the men she worked with, Art Director Darpan Chawla, DOP Mayank Khurana, Sound Designer Shreyank Nanjappa and Editor Ghanshyam Shimpi. 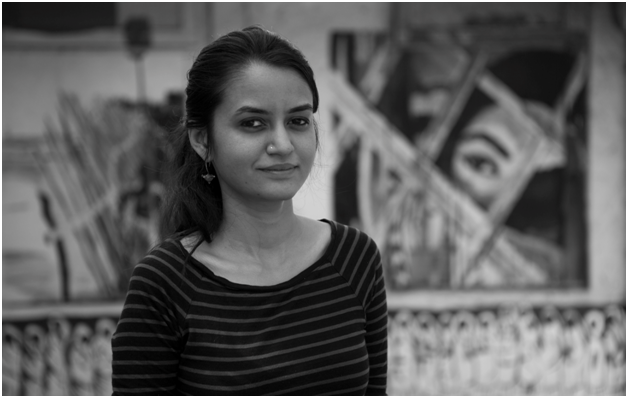 Payal, you are Mumbai born, in the year 1986. What was your family background like in this very variegated city?

We lived in relaxed, laid back south Mumbai. My mother is an artist and my father a psychoanalyst so there was talk of art and film discussion at all odd hours. There were always artists and filmmakers around. Then, my parents sent me to Rishi Valley School when I was eight-years-old. This school has a unique approach to learning and a liberal environment which encouraged different interests besides academics. No TV sets so no television. On Fridays, there was a film club which we would eagerly await. Here we watched Tarkovsky, Herzog, and Ghatak without really knowing how to see these films. I later realized the impact they had had on me.

And your college years?

I graduated from St. Xavier’s College in Mumbai - in Economics. I was keen to pursue a BA degree as I thought it would help me cultivate a point of view before moving into any creative field. In college I took a class on cinema which drew me into studying film further. After college, I joined Sophia Polytechnic for a one year course in Media, with an intense course on cinema. I watched the films I had seen at school with a new perspective. It led to a desire to make films myself. I started to attend film festivals like Experimenta and the Mumbai International Film festival, where I saw the amazing films of Amit Dutta. The way in which he based his films on mythic and folktale like structures, started getting me thinking about a completely different approach to cinema – rooted in the personal, where memories, myth, fantasies and dreams can merge into a seamless whole.

That was the turning point. My target was Film and Television Institute in Pune which encourages this kind of personal, insightful cinema. I did not get in on my first try. I then did a stint as an assistant director at production houses and worked with video artists. While figuring out what I should do, I made films on my own where I experimented with form. One film ‘Cassandra’s Gift’ was a documentation of my mother Nalini Malani’s installation making process it screened at MIFF 2014. I also experimented with making hand drawn animations which I still try to incorporate in my work

You sought out your own training in film, it would appear, quite successfully

In 2012, I applied to FTII again and got in to the direction course - the best decision I had made. It shaped the way I look at my practice. Above all, it allowed me to question myself through my work without any kind of external pressure. I was able to continue my experimentations in cinematic forms - something that really excites me. In my free time, I made a film called ‘Last Mango Before the Monsoon’ which I hoped to exhibit in both a gallery as video art and also as a film. My aim was to structure a film as an elliptical whole rather than one that begins and ends.

The film won the FIPRESCI Prize and Special Mention from the International Jury at The International Short Film Festival of Oberhausen (2015). It also won the Best Film (Shared) and Best Editing at MIFF (2016). It screened extensively in International festivals and was also exhibited in art galleries.

And Oberhauusen is the mecca for non-feature filmmakers. Even as a student, your films seem to draw awards like a magnet. Now, your FTII student film, as Cannes dates near, is the only official Indian entry in Cinéfondation in its special new talents section. What next?

I want to continue my explorations of cinematic forms after FTII as well. I hope that I can extend these to a longer feature film format. My primary interest is to bring together a painterly approach to filmmaking especially in relation to time.

Your wonderful short – just 13 minutes – does exactly that. It has an artist’s inner eye when it comes to colours, composition, pinpoint sound and the currents of feeling felt within. We wish you all the best at Cannes and your future work