Stone Walls Do Not a Prison Make...

"Stone walls do not a prison make,
Nor iron bars a cage"…….

These are the first lines of a poem entitled To Althea, from Prison written by Richard Lovelace in 1642. Lovelace wrote the poem when he was imprisoned in Gatehouse Prison. Nearly 400 years hence, these beautiful lines come to mind as one wanders across the Jamini Roy Art Gallery in Kolkata watching mesmerised, at works of art created by the inmates of correctional homes most of who have never touched a paintbrush, looked at a canvas or toyed with boxes of paints.

The paintings are amazing considering the lives of these men and women spent behind the bars of correctional homes many of who have not seen the sky for months together. In fact, in one of the exhibits, the painter has not offered any glimpse of the sky. When asked why, his response was, “I have not seen the sky for a long time in its real expanse so I did not feel like putting it in my work.” Yet, it has been observed that most inmate artists seem more attuned to escaping their environment than capturing it.

Inmates of Correctional Homes are captive in many ways. One of their tragedies lies in the fact that they live in an enclosed world, away from the mainstream. For these inmates, an art exhibition of their personal works can only be dreamt of or imagined. 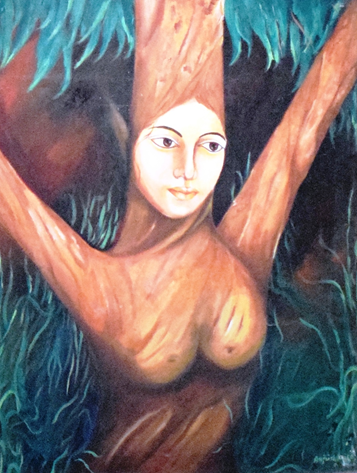 But it happened in Kolkata. Their choice of subject, treatment, style and technique are not inhibited by the discipline that forms an integral part of the mainstream artist, trained or untrained. Nor is art really a choice of a vocation or even a hobby. It is just an invisible window they did not know existed but has suddenly opened its panes to welcome them.

Each work of art for every single inmate is a culmination of a lonely struggle to express one’s individuality differently from what this person is known as – a prison inmate. The struggle towards this self-expression of an inmate does not come through the surface of the work but is embedded in every stage of the process, every step and every variation, choice of colour, line and texture.

This exhibition provided a platform for inmates to rediscover themselves through an alternative channel of self-expression away from the stigmatised world of prison walls and bars. It also sheds light on works of art done by people in prison, aided, trained and supported by artists working around the criminal justice system.

The actual offered an insight into the versatility of art as a creative form even for men and women who live in a world different from ours. One corner of the gallery was reserved for the artists who went about their works, oblivious to the visitors who watched them at work, creating more works of art.

The paintings are explicit in expressing, consciously or subconsciously, the longings, the dreams and the sorrows of their creators. One painting in light blue and black showed a crowd of female inmates looking through the bars of a collective cell. Another one shows a pregnant woman with her womb reflecting the profile of another woman. This marks a point of departure and makes for a powerful statement on motherhood looked at from a different perception.

In another one, done in soft browns and beiges, shows a woman personifying a tree with her outstretched hands forming the branches flowing up into the sky. The leaves are painted in turquoise blue marking the artist’s originality. One painting shows a female prisoner stretching out her hand from behind bars to pass on an envelope / card perhaps suggesting her longing to come back to the mainstream. 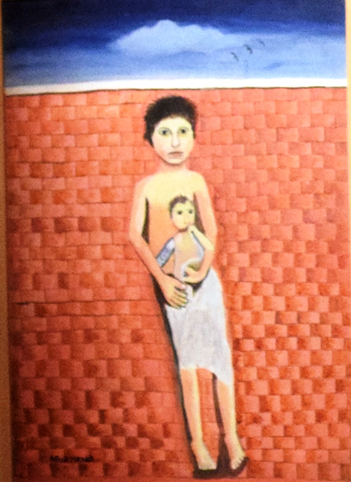 There is a painting of the Goddess Kali with her red tongue sticking out but minus her anger, as if she is a common woman. One illustrates domestic violence in reverse with a woman bashing up a man under her feet. We observe a kind of transformation that gives the art objects integrity and bestows on the artists a dignity independent of their moral status..

The exhibition has been aptly titled Moner Akash meaning “The Mind’s Sky” organised by pHREEDOM4EVER that has extended its event management functions to reach out to activities directly related to corporate social responsibility and welfare-related activities.

Chaity Ghosh, founder and proprietor, pHREEDOM4EVER, says, “with the kind permission and support from the Dept of Correctional Services, Government of West Bengal and in association with the Flight to Harmony Foundation, we have been able to exhibit the art works of the inmates so that their creative powers can be absorbed by the mainstream and they may get the recognition they deserve as artists who have been able to symbolically cross the bars of their cells to reach out to the common man.”

The ICCR (Indian Council of Cultural Research) has been an integral part of this movement and agreed to be the venue partner to respect the cause. Ideator, elocutionist and performing artist Sujoy Prosad Chatterjee introduced the concept and idea of the exhibition and also the guests and artists, all inmates of correctional homes.

Chitta Dey, a noted artist and sculptor of the Flight to Harmony Foundation has been instrumental in training the inmates who came forward to explore the idea of learning to draw, paint, sculpt and so on and Dey interacted with them on an equal platform that evolved into deep friendship breaking down the barriers that exist between a prison inmate and a free artist.

With his inspiration and initiative, Dey says that he just pushed the borders of their dreams so that they can see them fulfilled with their imagination bearing evidence in their works of art. “Among them, one gentleman was 83 and he came and asked me whether he could learn to paint at his age. I told him art is not bound by age or class or gender or education and anyone can learn art at any age. Four years hence, he is now 87 and is a painter trained at the workshops we have been conducting for the past four years from time to time,” says Dey.

This project would not have been possible without the active support of Arun Kumar Gupta, IPS, DG & IG, Correctional Services, West Bengal who was present at the unveiling of the exhibition. He says, “Culture Therapy has been proved to be one of the most successful methods of correction through creative forms of self-expression such as music, dance, theatre and fine arts. The Correctional Services, Government of West Bengal and Flight to Harmony have come together to chisel out the hidden artist within the inmates.”

The lamp was lit by a group of dignitaries such as Honorable Minister, Bratya Basu, Mayor-in-Council Debashish Kumar, noted vocalist Promita Mallick, filmmakers Sudeshna Roy and Abhijit Guha, noted television icon Chaitali Dasgupta, dancer-mentor-teacher choreographer Alakananda Ray and dancer-choreographer Sudarshan Chakravorty along with Sri Arun Gupta. The last word belongs to Bratya Basu who said, “One day, I wish to watch these paintings in an exhibition along with the works of their mentor and teacher Chitta Dey.”