A Tepid Cannes Ends With Women on Top!

CANNES: The 19 films that competed in Cannes together came across as a tepid selection, especially when contrasted with last year’s big winners which included gems such as Ken Loach’s ‘I, Daniel Blake’, Andrea Arnold’s ‘American Honey’ and Asghar Farhadi’s ‘The Salesman’.

However, what set 2017 apart on the final awards night at Cannes, were the singular honours accorded to women, who in the past have felt marginalised at the festival.

Starring in a record four titles in the Cannes line-up this year, the 49-year-old stunning Australian actress Nicole Kidman was a dominating presence at the festival this year. She was accorded a separate unique award in the specially-created ‘70th Anniversary Prize’ for being the exceptional all-round actress that she is.

Kidman stars in the second season of Jane Campion’s six-part BBC television mini-series, ‘Top of the Lake: China Girl’, in which she appears as Julia, the Australian mother of a 12-year-old pregnant girl who disappears. In British director John Cameron Mitchell’s ‘How to Talk to Girls at Parties’, based on the Neil Gaiman short story, she plays an eccentric punk fashion and music entrepreneur who takes to a strange alien character as her protegée. Kidman is in Sofia Coppola’s ‘The Beguiled’, as Martha Farnsworth, headmistress of a Virginia girls’ school that shelters a wounded soldier (Colin Farrell) who stirs her pupils’ emotions and sexual feelings. She is a powerful figure in ‘The Killing of a Sacred Deer’ by the Greek director Yorgos Lanthimos as the wife of a brilliant surgeon (Colin Farrell again), whose family is besieged by a young boy seeking retribution for his dead father.

Director Sophia Coppola was noted as the first woman director since 1961 (and only the second woman in Cannes history) to win the Best Director award for her film ‘The Beguiled’, a remake of the American civil war film based on a Thomas Cullinan novel, which was previously filmed in 1971 by Don Siegel. In her absence, juror Maren Ade accepted the prize, reading out Coppola’s message thanking her parents as well as director Jane Campion for being “a role model and supporting women filmmakers.” In 1993, Campion's film 'The Piano' shared the Palme d'Or, the only woman director to win this award to date, with Chen Kaige's ‘Farewell My Concubine’ and headed the festival jury in 2004.

Lynne Ramsay’s ‘You Were Never Really Here’ completed just a week before the festival screened on the last day winning high kudos for its self-assured and skilled nuances as a genre film. The film collected two awards, Best Actor for Joaquin Phoenix and Best Screenplay shared with ‘Killing of Sacred Deer’. An adaptation of T Jonathan Ames’s novel, the film follows a burly, baby-faced New York mercenary hired to retrieve lost girls and sex slaves. He carries out his task with single-minded purpose, armed only with a hammer. The man comes across as a traumatised tender brute — with flashbacks that convey his own abuse as a child and also in the military and FBI. The director, Ramsay, with just two feature films in the last 15 years, pulls off a unique style and sensibility of New York’s street gang wars with this gory, vindictive and yet touching film.

Juror decries how women are portrayed in today’s films

Jury member Jessica Chastain, at the final Awards ceremony stated, "The one thing I really took away from this experience was how the world views women. There are some exceptions, but for the most part I was surprised with the representation of female characters on the screen in these films …I hope when we include more female story-tellers we will have more of the women that I recognise in my day-to-day life, ones that are proactive, have their own agency and don't just react to the men around them — they have their own point of view." Another juror director Maren Ade, agreed that more female directors were needed, adding: "We're missing a lot of stories they might tell." 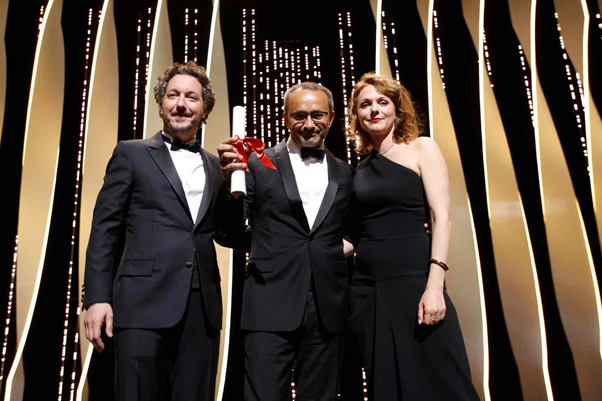 The top prize at Cannes went to the Swedish film ‘The Square’ directed by Ruben Östlund, belying hopes from many that the winner would be the emotionally harsh, terrifyingly touching ‘Loveless’ from Russia, by the director of ‘Leviathan’(2014), Andrei Zvyagintsev. The film tellingly conveys the icy minefield of inhumanity that Russia is today as it follows a loathsome married couple who detest each other and are ready to divorce, each with a lover on the side. They blame the unexpected pregnancy that triggered their marriage. The problem now is their unhappy 12-year-old son who neither of them wants. The boy sobs miserably as he secretly overhears them debating on where he should go. The next day, he disappears. The couple is then forced to be together in their search for him. Their journey describes the hellhole they live in and the demons that inhabit it. 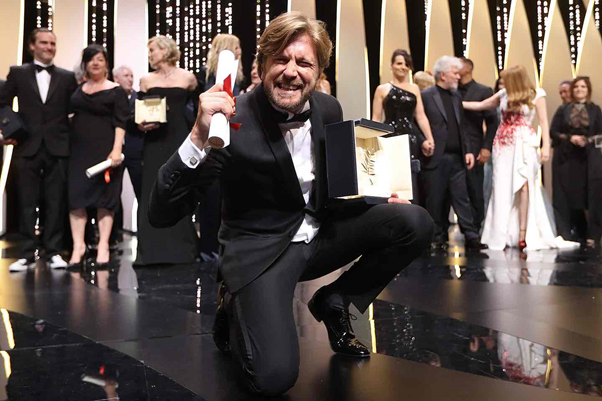 Palme d’Or winner ‘The Square’ moves with an energetic, pitched abandon from comedy to thriller to surreal imagery. It follows the amiable but self-important curator of a museum, which takes pride in its pretentious and banal conceptual art. The film delights in its bland exposure of the fatuous, preening idiocy that the intellectual world of art indulges in. But, alongside this take-off of a make-believe lifestyle, the film also reveals the real world of the needy, beggarly, sidelined immigrants that fill their streets, who sullenly and fiercely are trying to make a living.

The curator finds that his wallet, cell phone and even his cufflinks are stolen in an induced street fight. He then retrieves them through a dubiousmaneuvre that begins to shadow his every movement. He gets increasingly trapped in trying to evade its consequences. The film’s most revealing scene is the lavish dinner for its well-heeled patrons where a performance artist tellingly impersonates an ape, leaping table to table with threatening grunts. His antics increase in intensity and violence until it is the bow-tied men who show themselves for what they really are.

Another Cannes Fest ends to applause

There cannot be another festival like Cannes, no matter how its merits or otherwise are debated. Cannes has all the plus points a festival needs. A location away from a teeming city, surrounded by greenery, a space where playgrounds abound alongside long stretching sea shore, restaurants of all types and prices within ready reach, a public that rubs shoulders with festival delegates, and above all, an expertly designed and practical festival complex that is regal and spacious, with itswhich works efficiently to multitude of screening rooms, besides a sprawling marketplace. And finally, the extraordinary range of films, those that are official, and also others a plenty, placed by eager hopefuls. They offer a feast for all.