58 year old Rakesh* was in his early twenties when he first took to the bottle. His drinking slowly spiraled out of control and he became a full-blown addict. Alcoholism began affecting his mental health and strained his relationship with his family. Not only was his personal life in shambles, his drinking took a toll on his career too.

Despite being a graduate of Shree Ram College of Commerce; he ended up in a job that paid him close to nothing. After struggling for nearly two decades, he finally decided to seek help. He joined Alcoholics Anonymous (AA) in 1996 and has been sober for 18 years now.

Like Rakesh, many addicts in India have turned to Alcoholic Anonymous groups to get back on the road to sobriety.

AA is a voluntary, non-profit society of recovering alcoholics founded in 1935 in the United States of America. It was established with a purpose of combating alcoholism, considered a moral sin at that time. Since then, AA has evolved into a holistic recovery program for alcoholics with a strong global network. It claims to have a membership of over 30 lakh alcoholics worldwide and 40,000 sober alcoholics in India alone.

The group relies on a ‘12 step programme’ for recovery and adheres strictly to the principle of maintaining anonymity. Through anonymity the society ensures the creation of a safe space for its members and protects their reputation from any stigma that maybe associated with addiction.

But some believe that the ‘12 step spiritual programme’ is laced with religious overtones. Naveen* an AA member denies such claims, “AA has nothing to do with any religion. Our preamble clearly states that our organization is not allied to any sect, politics or institution. Spirituality is different from religion. It is about being honest to oneself and liberating the conscience from guilt.” He insists that the only requirement for membership is the desire to stop drinking. 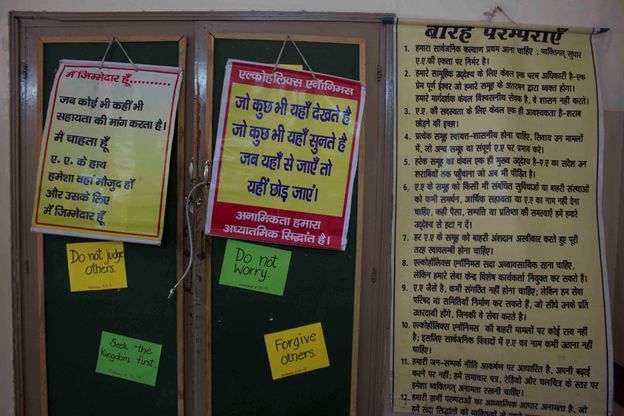 Recounting his battle with alcoholism, Naveen adds, “I used to drink uncontrollably. I lost several jobs and was in a very bad financial state. Four years of sobriety through AA gave me the strength to set up my own business. I attended meetings regularly and things started to improve.”

The gatherings are usually conducted in schools, churches and de-addiction centers, with members agreeing to meet for a designated number of days in a week. Addicts acknowledge their dependence on alcohol, pray together and offer support. They talk about their struggles, read aloud from the literature to engage, and even share a few laughs.

When AA groups first began cropping up in India, not many women came forward. The social and cultural stigma associated with women alcoholics made it difficult for them to come clean about their problem. However, over the decades, their participation has increased and several ‘women’s only’ groups have been started.

58 year old Reema* who has been an AA member for 20 years, says the attitude of women alcoholics has undergone considerable change. “When I first came, we were just four women. Now we have a strength of about 30 women and the number has been fast growing. Of late, more and more young women are joining us.”

Gorav Gupta, a Delhi based psychiatrist believes coupling formal de-addiction treatment with sessions at voluntary groups such as the AA can be highly effective in tackling alcoholism. “Mutual-help groups work best because individuals are self-driven to achieve sobriety. Consulting a doctor can sometimes seem like an arbitrary process. But, groups like AA bring together people who can trust each other,” he said.

With around 45 groups in Delhi and 1400 groups in India, AA is now pulling scores of alcoholics out of the dark clutches of addiction.

(*Names of AA members have been changed to protect their identity)