Actor, theatre personality, poet Soumitra Chatterjee will receive Légion d'Honneur - the highest award in France for military and civil merits- for his lifetime contribution to cinema.

The title chosen for this great actor is Commander which happens to be the highest honour for an artiste in France. He is the first Indian artist to be bestowed with this award which, interestingly, comes exactly 30 years after his director and mentor Satyajit Ray was bestowed the same award in 1987.

This is a great honour for Indian cinema in general and Bengali cinema in particular. At 80+, he is still very active though quite tired and in weak health.

Few outside his home state, West Bengal, are aware of the other dimensions of his personality. He is a gifted elocutionist and recitation artist who can recite poets from Rabindranath Tagore through Jibanananda Das from memory. He is also a playwright, a translator of plays in other languages, a theatre director and actor. He has worked for radio, television and also did a stint with the jatra form of travelling theatre.

Sad that national cinema has never tapped the potential of this great personality. Sad also, that his contribution to Bengali art and culture is always linked only to cinema and that too, only with the name of Satyajit Ray and his films. 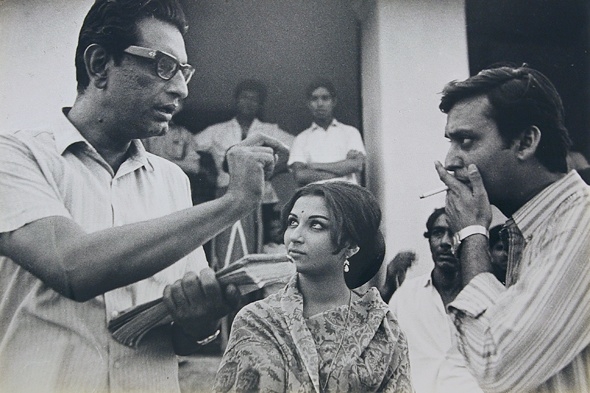 Chatterjee has acted in 14 films directed by Satyajit Ray that comprised of many diverse layers of characterization, performance, style and presentation. Apur Sansar for instance, was very different from Abhijan. Aranyer Din Ratri presented a different Soumitra from the Soumitra we saw in Ganashatru, Shakha Proshakha or in the Feluda series.

“I consider Manikda (Ray) my mentor, my guru whichever way you look at it. I benefited immensely from this diversity in his presentation and choice of subject, story, everything,” says Chatterjee adding that he also considers his two films with Mrinal Sen, namely Akash Kusum and Mahaprithibi, among his favourites apart from Tapan Sinha’s films. “Tapan Sinha held me by the hand and showed me the way. He is the best teacher I could ever have had,” says the actor who was vested with a very negative persona in Sinha’s period film Jhinder Bondi and the romantic, surreal setting he explored in Sinha’s Kshudita Pashan based on a Tagore story.

Around a dozen books of his poetry have been published beginning with Jalapropater Dharey Dandabo Bole (To Stand by the Waterfall). Droshta, an abstract translation of Khalil Gibran’s The Prophet, was published in 1995. His last play, Raja Lear, a translated version of Shakespeare’s King Lear, drew packed houses few years back.

Filmmaker Atanu Ghosh who has worked with Soumitra Chatterjee in his first feature film, Angshumaner Chhobi, and in many films thereafter, says, “Just before the scene where the actor, portrayed by Soumitra Chatterjee is visited by an old makeup artist in the film, he sat inspecting the old pancakes, stained mirrors and soiled brushes – ‘These old makeup materials remind me that its been quite a long journey’, he said. Pray, the journey goes on and on, inspiring us forever. Salute to the maestro who has also been bestowed with the Dadasaheb Phalke Award and now this.”

Asked about his debut as Apu, the protagonist of Apur Sansar, Chatterjee says, “A crew member from Ray’s team spotted me outside the Coffee House. They were scouting for someone to play Apu in Aparajito, the second in the Apu trilogy. Ray took one look at me and decided I was too tall for the Apu of this film. He asked for me after Aparajito won the Golden Lion at Venice. I was recovering from chicken pox. I did not know that he had already decided that I would play Apu. I went through a camera test and a voice test. I did not know that all this was to strip me of any camera-conscious behavior. He would ask me to drop in on the sets of Jalsaghar, then Parash Pathar. One day, when I dropped in on the sets of Jalsaghar, Ray introduced me to Chhabi Biswas, one of the greatest actors of the time. He introduced me as ‘my Apu for the third part of the trilogy,’ I was speechless.”

As a theatre director and actor, Soumitra Chatterjee sometimes includes the audience in his interaction, occupies centre-stage, turning the revolving chair into a wheelchair he rolls down the stage in the latter half with an imaginary ‘I’ seated on it. This part of his Tritiyo Onko Otoeb (The Third Act. Therefore) deals with the illnesses he slipped into in September 2007. His swift emotional vacillations indicate the evolution of the subject from childhood to adolescence through youth to adulthood mapping the personal, social, political and historical journey his life took, placing him in perspective.

About preparing for a film role, Chatterjee says, “There are no rehearsals for cinema. So, it is very important that the actor prepares for his role through discussions with the director, by reading and re-reading the draft of the script. Ray had given me a three-page sketch of his own conception of Apu as a character. He had asked me to read the original novel of Bibhuti Bhushan Bandopadhyay. I did. But I prefer to read the screenplay to reading the original because the screenplay always differs from the original. I do not like to be conditioned by preconceived notions of the character imbibed from the original story because they might have changed considerably in the screenplay.”

Soumitra Chatterjee’s is associated with an entire plethora of box office, mainstream films. The list is long – Manihar, Sansar Seemantey, Teen Bhubaner Parey, Koni, Kalratri, Atanka, Wheelchair, Basanta Bilap, Pratham Kadam Phool, Saat Pake Bandha etc. He has never directed a feature film. “I enjoy directing theatre. Directing plays needs around one month to 45 days of intense rehearsals. The first fifteen days are not very demanding. It is possible to get together in the evenings after a day of shooting. But if I were to direct a film, I would have to forget everything for around eight to nine months and work on a single film alone. Burdened with family responsibilities, this was not viable. Now, I am no longer interested.”

Soumitra Chatterjee is perhaps, one of the most multi-dimensional talents in the country. A BBC Documentary on him was titled Gaach which means ‘Tree.’ What better title can one think of to define a man of the stature and the talent that Soumitra Chatterjee personifies?