A FEAST IN AN EARTHEN POT

When Shiladitya Chowdhury and Debaditya Chowdhury, the brothers who are also partners who own Oudh 1590 invited me to The Great Awadhi Biryani Festival launched on May 16 to last for quite some time now, I was a bit confused. The sweltering hot month of May fills the air that does not make any biryani a welcome thought for the craziest foodie around. Everyone believes it is not a very wise decision to allow you taste buds and your digestive system to absorb and enjoy different kinds of biryanis in Kolkata in the middle of May till the middle of June.

But the wonderful spread of colourful, fragrant, decorated and textured biryanis of different kinds laid my fears of experiencing digestive problems were easily laid to rest. Before I left for the unveiling of dozens of differently concocted, orchestrated, synchronised and composed biryani fest, I decided to do some home work and what did I find? That Pratibha Karan, a retired IAS officer has written a wonderful book exclusively dedicated to the biryani that was published in 2010. Can you even imagine that someone can dedicate an entire book to the biryani? So what should be so surprising for the Chowdhury brothers to organize a biryani festival in the hot month of May in Kolkata when the mercury hits around 40 degrees Celsius during the day?

The Head Chef who chooses to call himself Ustaad Mansur Ahmed, along with Chef Mansur Ali were flown in from Lucknow specially to choreograph and compose the menu and to train the in-house Chefs in creating completely new biryani dishes that would suit the average foodie’s palate in summer.

Why Lucknow when we have dozens of varieties of what is popularly known as the Calcutta Biryani? The answer is simple. Awadhi cuisine is exclusively the pride of the city of Lucknow. Awadhi cuisine has similarities with Bhojpuri cuisine because Bhojpur is close by and the culture of food must bear similarities. The cooking patterns of Lucknow bear close resemblances with the cuisine and cooking of Central Asia, the Middle East and Northern India and contrary to popular notions, also offers very delicious vegetarian fair. The region of Awadh which lies in UP has been influenced by Moghul cooking techniques that reaches out to Central Asia, Kashmir, Punjab and Hyderabad. Therefore, the very idea of creating a restaurant chain revolving around Awadhi cuisine and its variations in the city of Kolkata by the Chowdhury brothers has been unique/ 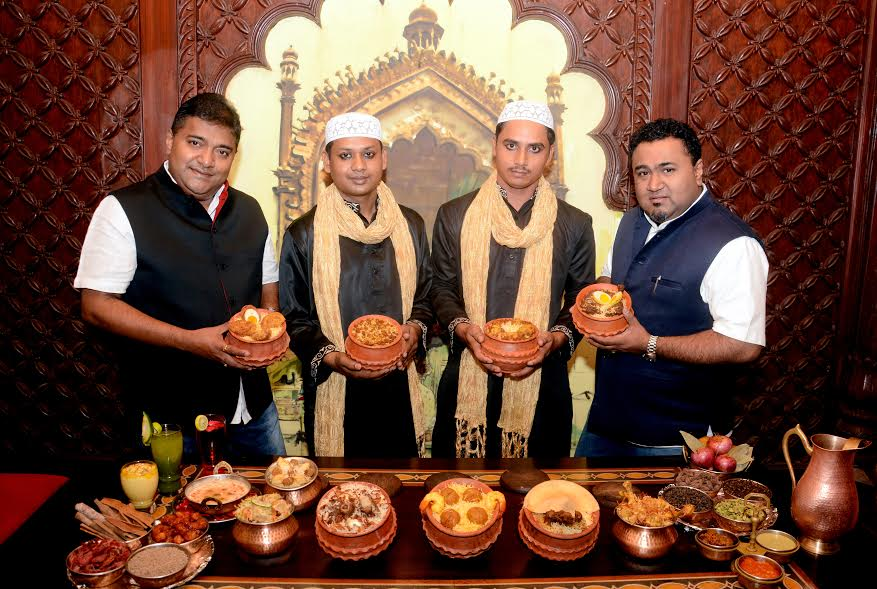 As a consequence, every single biryani and pulao spread out for choice is almost feather-light that does not lie heavy on your stomach because it is specially concocted with the heat in mind and with the customer in mind which sets a new trend in food places in Kolkata. Of course there are exceptions to this rule where the spices and the clarified butter used along with dry fruits and the seasoned meat or prawns or chicken are traditionally heavy and spicy,

“Kolkatans love for Biryani has reached epic proportions. Seasons do not matter to have and enjoy and revel in something that you love. We receive requests from our valued patrons throughout the year for reintroducing The Great Awadhi Biryani Festival. In the festival’s fourth year, we have introduced some of the preparations which will be a delight for our customers, says Debaditya Chaudhury.

The Awadhi Nargisi Biryani consists of the rice cooked along with with boiled eggs sheathed in cooked mincemeat which is also called Nargisi Kofta and is extremely tasty though a bit rich on the stomach. I specially liked the Yakhni Gosht Biryani which was a concoction of milk-white fine rice with each grain separate from the next generously dotted with goat meat and fried onion slices otherwise called barishta. The Murg Pulao was mind-blowing with small bits of chicken picked up with every spoonful of rice. Heavenly! 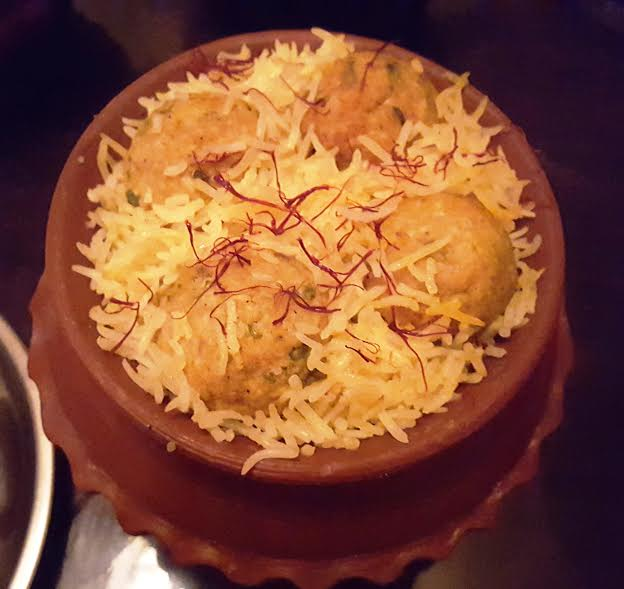 However, I am still a bit intrigued over whether the puritan Chef would agree with the garnishing of almost every dish with a generous sprinkling of cashew nuts and raisins. I am not very sure that this is routine but it is certainly an evolution and an improvisation. I once read that the Nawab Wajid Ali Shah’s Chef would spice his dum biryani with 127 spices, so that the negative impact of the heavy spices added for flavour and taste and colour would be neutralized by the lighter spices.

The biryanis are served in earthen handis covered with silver foil. If you wish to take one home with you, ask them to use plastic containers. The service by liveried bearers in Mughal-like costumes is impeccable and they will also suggest to the uninitiated customer what to pick and what not to pick depending on his taste and choice. The ambience, again influenced by Moghul culture and intricately carved woodwork forms the seats while much of the tableware and décor is either alloy or brass. My only problem is with the very low lighting which makes it difficult to see what exactly you are eating which is important for many like yours truly.

Did you know that Lucknow (formerly Awadh) biryani is the most original recipe for biryani? It is cooled using the dum pukht method and is normally called Dum Biryani. “Dum Pukht” literally translates from the original Persian to mean “slow oven” known to be one of the most refined methods of cooking, used both in India and Pakistan for the last 200 years.

The entire cooking process takes place over a low flame where the ingredients are placed in a sealed container to allow the meats to tenderise in their own chooses. Traditionally, the lid of the handi is attached to the handi itself with a circle of kneaded flour so that the steam is not allowed to escape. The lid is filled with water from time to time and when this water comes to a boil, it is poured into the handi where the biryani is being cooked. In some Nawabi families of yore, no water was poured on the lid and the biryani was allowed to cook in its own juices.

So rush to Oudh 1590 to join the wonderful biryani festival before it closes its special treat.