A Gig With a Message,Jaago Re!

"I wanted this band from Guwahati to perform in Delhi. I approached a number of venues. Nobody helped. It was extremely frustrating. That's when I decided that I'll do it on my own. That's how we began with our first gig," says Kaushik Jai Barua. The 25 year old graduate from the Faculty of Law, University of Delhi is the co-founder of Qrated,a Limited Liability Partnership(LLP) collective for artist management. It is one of the newest record labels operating in Delhi. “I am not the owner. We are a team. It is not my team. I am a member of the team like the others," he is quick to add.

The team? A group of 12 friends from Guwahati who live in Delhi. "There's a photographer in the team who also does the videos for us. One guy is studying in TISS, Mumbai. There's a rapper in the teamtoo," he says while laughing. 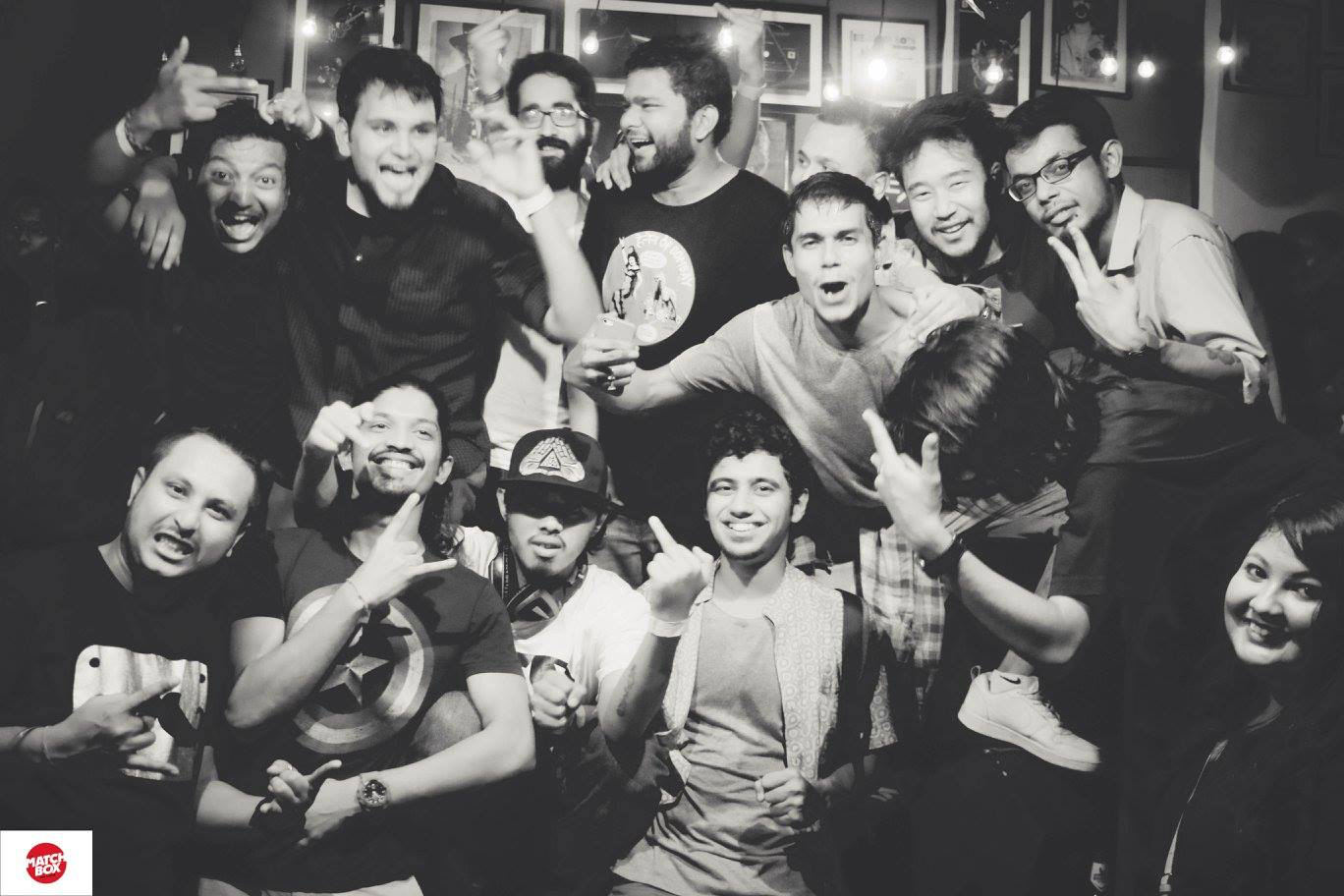 Kaushik previously founded CyberTree India working as its Creative Head and wrote for several journals while holding the distinction of being the youngest guy in Asia to write for Rolling Stones India. He had always wanted to work around music. He had been promoting bands since 2011 when he recently realized that this was not enough. "It wasn't sustainable for the artists. I wanted to manage artists and have my own label for underground art. What else could I do? I can't sing or play any instruments," he jokes.

Qrated is not just providing a platform for music. On 21st June, they organized a performance intervention marking 20 years of disappearance of Sanjoy Ghose, a rural development activist abducted by United Liberation Front for Assam(ULFA), at Maati Centre in Guwahati. Vivek, currently a Young India Fellow says, “The idea was to keep on asking questions and provoke our audience to think between memory and forgetting.” The play remains the first of its kind in memory of Sanjoy Ghose this decade. 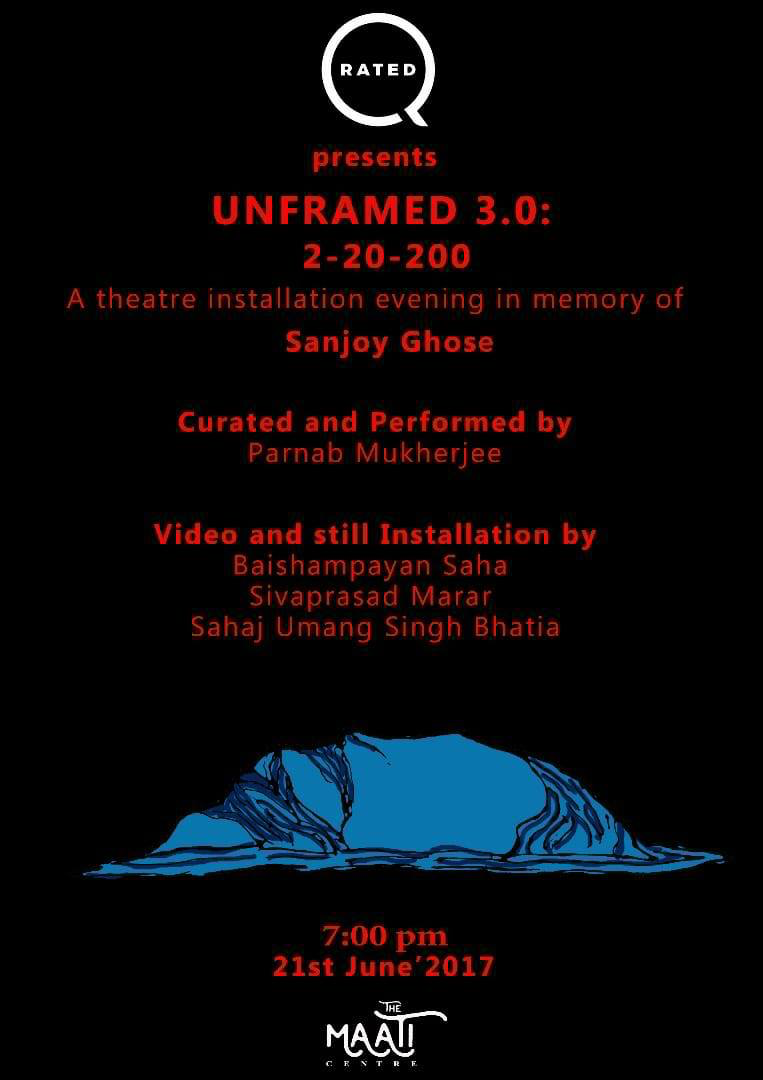 The poster of the play performed in Guwahati

"We have a gig coming up in Guwahati after which we're headed to Shillong. Then Bangalore and Pune. We wanted to do a multi-city tour. But tours happen back to back. We don't have that kind of corporate money. So we figured we'll go one gig at a time,"Kaushik explains. Qrated was founded in 2017. "I was facing a cash crunch in February for this gig I was organizing. Some friends offered to help with the sale of tickets. That's how the team came together." So far they've organized 5 gigs in Delhi. The last one was No Diggity at Match Box in Hauz Khas and it was attended by more than 400 people. The gig was a tribute to Mizoram’s most celebrated rap artist Michael M Sailo who died in a bike accident in April. Qrated paid money to the rapper’s family from the receipts of the gig. 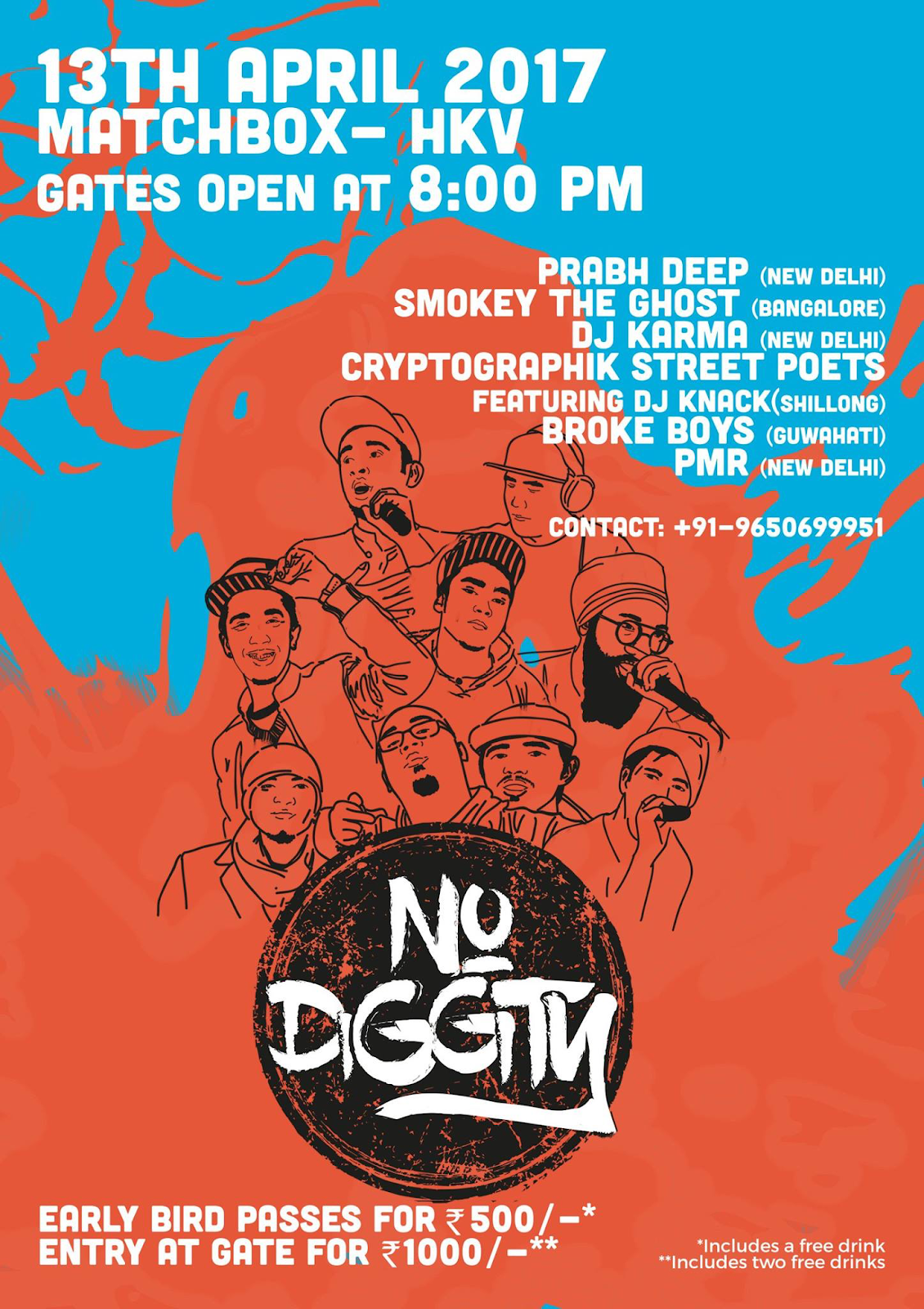 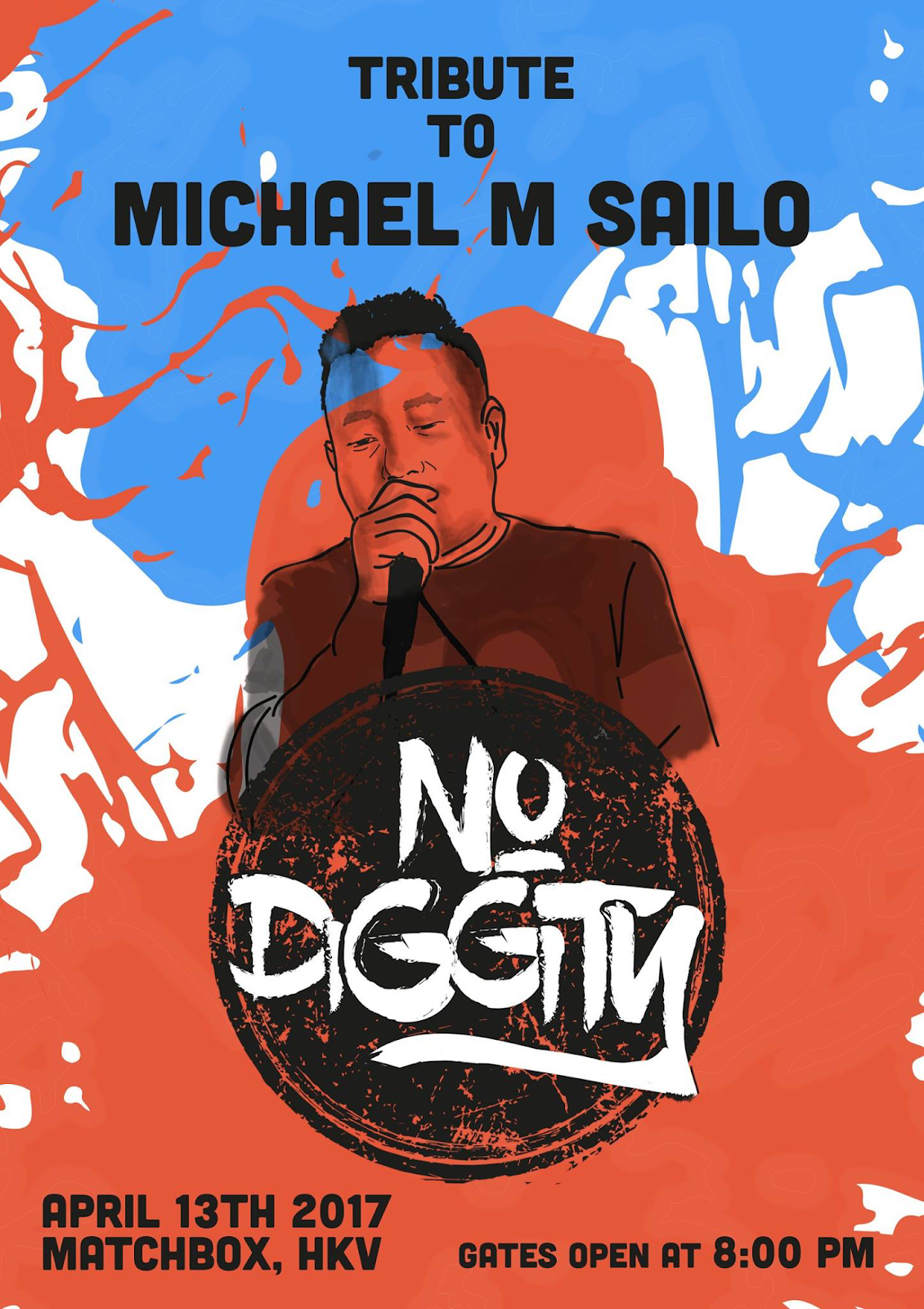 The posters for No Diggity

What's unique about Qrated? "A number of things. One, we don't bargain with the artists. No exploitation. Our founding principle is that artists need to be treated better. That reflects in the energy level of our gigs. Two, we pay the entire amount to our artists in advance. Even if we do it from our own pockets, our artists are always paid before the event. Three, our hospitality is unmatched. All flight tickets are booked in advance and fully paid for. We don't compromise on accommodation and choose only the best for our artists."

"I've been around the music scene in India for long enough to know that we are different because our intent is different. We don't want to consciously look different. The other day a friend said that we began the year as 10,000 rupees company and we must end it as a 10 Lakh Rupees company. But we don't want money for the sake of it. We want people to trust us with money. I just landed a job. But I know this is the best time to do something in our lives. Ultimately we want to be able to provide a stage to all artists and host them." 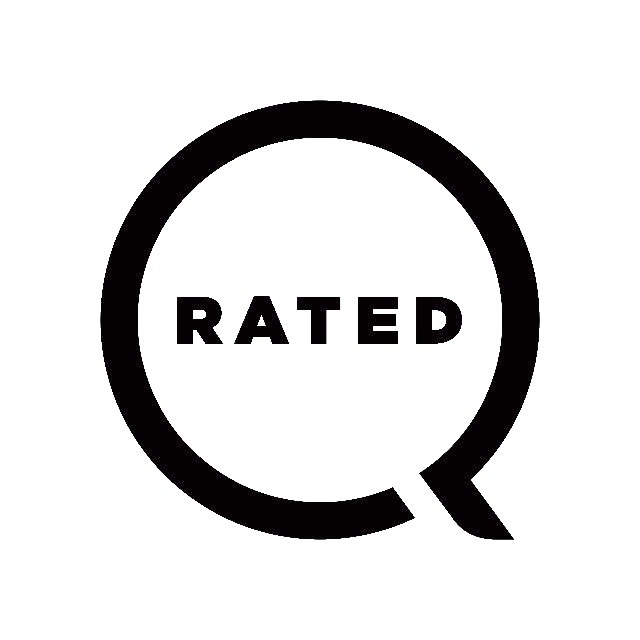 Ankur,another partner, says that the biggest problem that Qrated has faced so far is with venues. "Venues don't want to experiment or take risks. They are obsessed with numbers. Numbers on Facebook or YouTube. But art can't be evaluated in numerical terms. Our dream is to have our own venue in Delhi. A venue where we will not serve alcohol. You don't need alcohol to enjoy music. At our gigs, we don’t have much alcohol. We want to separate the alcohol experience from the musical one. That’s what the after parties are for. We already have a venue in Guwahati."

"There is a lot of difference of opinion within Qrated when it comes to our politics. There's someone who is inclined towards the BJP while some others went to protest against ABVP. We have fights. But we work together. We want the world to see this. And that is what our next gig in Delhi is going to be about,” says Upasana almost letting the cat out of the bag. “We don’t know if it is going to be called Azaadi or Jaago Re. We don’t know if it is going to be in Garden of Five Senses or anywhere else. We don’t know what the artist line up is going to look like. We know that there will be more people than ever before. We know that we no longer want political music to be used as a filler in gigs. Because we believe political music deserves a gig for itself. And we know for sure that after this gig, the way Delhi looks at music and beverage will change forever,” Vivek explains. Both Vivek and Upasana have graduated from the University of Delhi this year and are partners at Qrated.

"Anybody can get Nucleya to perform and make money from it. But we want people to come out and discover new artists. This process of discovering art and understanding artists can never happen on YouTube," he insists. "We genuinely believe that the live experience is necessary for discovering art. And we're different. We understand that mistakes are a part of us. Kurt Cobain made mistakes that people enjoyed on MTv unplugged. Our own artist at No Diggity was the worst of the lot. He messed up big time. And let me tell you that it makes no market sense to give him another chance. But we will. Because that's what we at Qrated believe in."