Behdeinkhlam: A Festival That Unites People Against "Evil"

JOWAI(MEGHALAYA): The occasion was special. It was a day to demonstrate peoples unity against evil. So, the villagers from different parts of Jaintia Hills district in Meghalaya came together on Monday at Tuber Kmaishnong village.

It was the last day of the four-day Behdeinkhlam festival. People of different age groups including the children made their way to the ground called Biar (sacred muddy pool). The villagers from Wapung Shnong, Tuber Shohshrieh, Pamra, Pasyih besides many others were in a visible rush to make it for the final day of the festival.

“We want the evil to be wiped out of the society. We want to progress and at the present day we also realize that we need to protect the environment,” said a local of Pamra village who took part in the procession to mark the occasion. 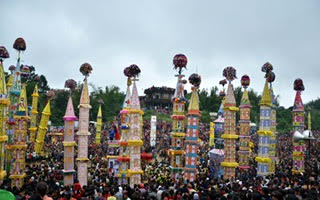 “It is used to seek divine blessing for a rich harvest in the year ahead. It’s the most significant festival in the socio-economic life of the Jaintia people those who believe in the Niamtre or traditional faith. Behdeinkhlam festival prays for good health and for the prosperity of the people asking for heavenly blessings for a plentiful harvest of crops,” Bewill Shylla, president of the organizing committee or Sein Raij Tuber, said.

Neighbouring villages carry rots (raths), colourful 30-40 ft tall structures made of bamboo and wood, at the main ground of the festival. The villagers carry the rots in a circle on the ground after the rituals.

“The various rots carry different messages depicting present socio-political and economic issues of the state and apparently Behdeinkhlam is not all about driving away sickness but also to eradicate the social evil that is inflicting society,” said another member.

These days Behdeinkhlam ‘rots’ are built on wide ranging global issues including health, politics, sports and of course environmental issues.

“This time, we have seen messages of crime against women, on the importance of conservation of environment among others on the rots,” said Sannio Siangshai, a local journalist.

The festival is organized by the Sein Raij Tuber in collaboration with the department of art and culture of Meghalaya government, Meghalaya Aids Control Society and Jaintia Hills Autonomous District Council.