Rarely does one come across a play that presents ideological conflict disguised as a spine-chilling thriller spilling over with edge-of-the-seat suspense about what is going to happen next.

Barff, written and directed by Saurabh Shukla is an outstanding melting pot of thrills and ideology, the difference between the perceptions of truth as understood by Siddhant Kaul (Saurabh Shukla) an erudite, city-bred doctor pitted against Ghulam Rasool (Sunil Palwal), a semi-literate, Kashmiri taxi driver and his wife Nafeesa (Sadia Siddique).

The time span is a single day and night while the backdrop is an abandoned village in Kashmir where the entire village except Ghulam, his wife and their baby have shifted elsewhere after an armed conflict involving bombs exchanged between the terrorists and the military. Dr. Kaul, who had come to Srinagar for a medical conference is persuaded by Ghulam to come to his village home to take a look at his very sick child Jigra and suggest a cure.

“Why did you not leave with the others?” asks the doctor, to which, Ghulam’s response is, “do you leave your old father alone to die when he is old and ailing? This house is like an old parent who has given me shelter and brought me up, how could I leave it? I am not a coward like the rest.” He switches on the lights in every home in the village, though they are all empty to make the village appear alive. His perception of Life differs radically from the doctor’s. These come across only through subtle suggestions and hints.

The play opens on the single set of the rising cliffs of a mountain in the backdrop, with drops of snow suggesting the season, fore fronted by the interiors of Ghulam’s modest home. A street lamp on a pedestal stands on one side, offering brief respite to the ageing doctor who comes huffing and puffing his way through an uphill climb to the village following Ghulam because the roads are blocked by snowfall.

It is a chilling wintry night. If the doctor is mystified by Nafeesa’s obsession with the baby’s sickness, his actual sight of the child renders him speechless with shock. Within this scenario, a dialogue culminating on existentialist arguments and quarrels between the doctor on the one hand and Nafeesa on the other forms the crux of this strikingly unusual narrative that reverses the invisible schism between the educated, erudite, urban and kind doctor who begins to learn a lot from the unlettered, rustic and fiercely aggressive Nafeesa. 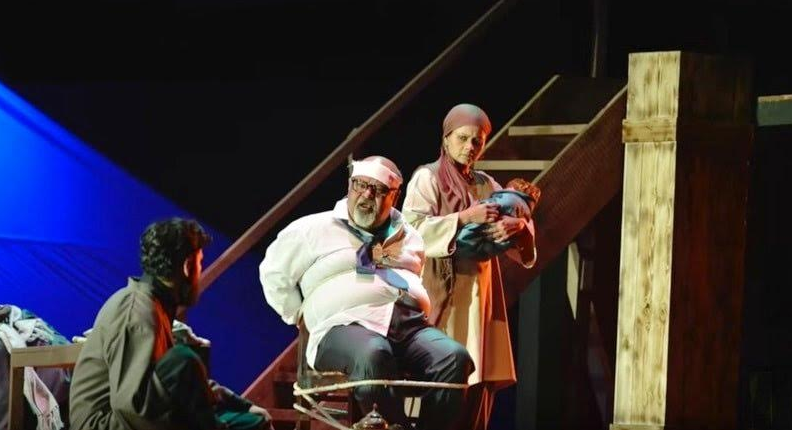 Ghulam, deeply in love with his wife and also scared of her personality, tries to believe in what his wife believes about the baby. Often, he is sandwiched between the doctor and his wife, veered more towards his wife because they share their deep concern for the perennially sick child. They refuse to give an ear to the doctor who tries to shed light on the child’s ailment and possible cure. The first half of the play is pegged to the suspense of the victim-victimiser paradigm where one wonders about whether the Kashmiri couple have ulterior intentions or whether their concern that forces them to hold the doctor captive is genuine.

The mood changes in the second half where we are overwhelmed by the overload of dialogue. What slowly begins to unfold, however, is a powerful ideological debate on how Truth is perceived differently by the doctor and the young couple. This invests the play with a different dimension that carried no hint in the first half. When the doctor suggests that Nafeesa needs a psychiatrist because her obsession is abnormal, Ghulam says, “When worshippers pray frantically in front of a stone, smear it with vermillion, bathe it with holy water and offer flowers for relief from their problems, or offer prayers in a Masjid, do you ask them to go for psychiatric help?” The doctor has no answer.

What is really wrong with the baby and why is the Ghulam couple so hinged on holding the doctor captive unless he precisely diagnoses the baby’s illness defines the foundation stone on which the play is built. The doctor finally surrenders to the faith the Ghulam couple places that creates Truth which cannot exist without faith. “What is truth?” asks the doctor at the end of an electrically charged climax. “Truth is an abstract concept, a state of mind that has no existence without faith. So, their belief in what was wrong with the baby is correct and my diagnosis, based on what I consider to be the Truth is wrong,” says Kaul.

The political turbulence of Kashmir comes across subtly as a sub-text in the back story, without needless emphasis. It establishes the logic behind the solitary lives of Ghulam and the reason for their baby’s ‘sickness’. Kaul and Ghulam represent two different facets of the average Kashmiri in India. Kaul feels no sense of belonging because he has never lived in Kashmir and happens to be Kashmiri only because he is born one. Ghulam is a true-blooded Kashmiri who tries to be the perfect host even to a person he has held captive.

The title Barff meaning “ice” is a metaphor for the ‘freezing’ mindset of city-bred, urban men and women who are so fixed in their notions of truth and illusion that they are not prepared to accept any changes in their concepts. Barff also defines the aura of the winter that soaks the atmosphere with the chill and the mystery that fill the characters with. The light effects are magic that add to the mystery beginning with the street lamp, the low-key lighting in Ghulam’s home, the shadow play that creates the performance in the kitchen and the blue tinge that enriches the icy backdrop of the mountain. Five machines were specially created to establish the effect of snow on the stage.

Saurabh Shukla who bagged the national award for his brilliant performance of the small court judge in Jolly LLB, fleshes out the kind-hearted doctor Kaul realistically, breaking into a couple of lines from Hindi film songs when Nafeesa forces him to sing. He vacillates between anger, warmth, curiosity, surprise, shock with great conviction. The play has its own touches of fine humour. Sadiya Siddique, one of the most underutlized actors in cinema and television, internalises Nafeesa extremely well. Sunil Palwal who performs Ghulam, is originally from the Valley and perhaps gives the most authentic performance.

Barff is a never-to-be-missed play which however, does not quite explain away the Rs.4000 tagged to the ticket price beginning at Rs.500 in a poor country like India. Makes one question – is theatre an art form, or is it slowly surrendering to commerce?