Doordarshan Dies--Well Almost--- Without a Song

There was a time when Doordarshan occupied a special place in the day to day lives of millions of Indians. Serials like Hum Log and Dekh Bhai Dekh, shows like Bharat Ek Khoj and Chitrahar were looked forward to every week by those who had a TV, as well as those who didn’t.

The monopoly DD once had on India’s entertainment channel market is no more. It has now been reduced to a minor player in the television media, and private channels are the ones who dominate the market now. The falling quality of content is one of the main reasons that resulted in the steep downfall of viewership numbers.

At an average of two thousand crore rupees a year, the operating costs of DD are not low. 68% of these costs come from the Government and rest through DD’s own revenue. With this expenditure, producing quality content and maintaining viewership should not be difficult. But the main obstacle to this lies in the lack of autonomy for DD. At the moment, DD has little autonomy to decide what it produces and broadcasts. Over the years, it has been reduced singularly to being the government’s mouth piece.

The idea of autonomy for the government-controlled channel was first raised after the Emergency. It has now existed in the public discourse for a long time, but no efforts have yet been made in this regard. Every now and then, reports of the government’s obvious meddling in the content of the channel keep emerging.

For a long time, the need for a revamp and revival of this publicly owned broadcaster has been recognised. In 2014, a committee headed by Dr. Sam Pitroda submitted a report with 26 recommendations to improve the present state of Prasar Bharati, which administers the two publicly owned broadcast services, Doordarshan and All India Radio. In this report, Pitroda said, “We want Prasar Bharati to become a public broadcaster as compared to a government broadcaster. We need to strike a balance as far as government funding and airing content is concerned.”

The poor quality of the content can be attributed to the fact that Prasar Bharati spends less than 15% of its expenditure every year on content. The Committee made a recommendation to scale this up to 50% in a period of 5-7 years, but little improvement has been seen in the quality since the report came out. The viewership has also remained dismally low compared to other channels, despite Doordarshan being mandatorily aired across the country.

The two media units were previously under the purview of the Ministry of Information and Broadcasting. The Prasar Bharati Act was passed in 1990 to form an autonomous body with a high degree of credibility which would take over from the Ministry to look into the functioning of the public media houses. However, when the Act was finally enacted in 1997, it continued to give a great deal of decision making powers to the Ministry. As a result, it still seems to be a subordinate of the Ministry of I & B.

One of the recurring recommendations submitted by the Committee was to give Prasar Bharati complete autonomy over its assets, content, and recruitment. At present, Prasar Bharati cannot make any decisions regarding its personnel and usage of its assets without the consent of the I & B ministry. A lot of monetary potential remains unutilized as the assets and equipment remain unused.

The technological practices at DD also remain outdated. While the world has moved on to digital transmissions, DD remains to be in possession of a network of 1412 analog transmitters , which it continues to broadcast over, despite the rapid fall in the number of televisions using analog transmissions. 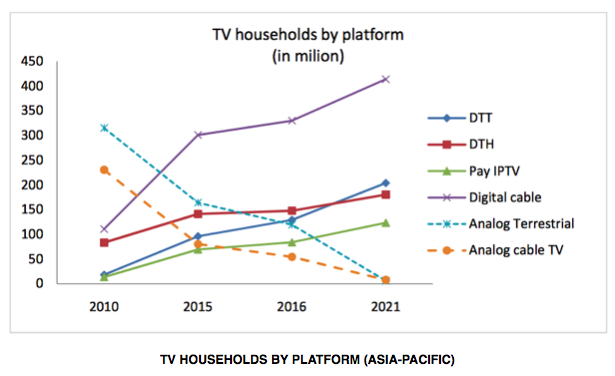 Across the world, the process of digitisation began decades ago and has even been completed in many countries. In India, however, the process is still at a nascent stage. According to the TRAI report that recommended digitisation, “The progress of DTT (Digital Terrestrial Transmission) implementation is slow and appropriate efforts for development of an enabling eco-system are required to be taken up.” Currently, DD only possesses 16 digital transmitters which are operational. Hundreds of crores can be saved, if more effort was put in modernising the technology used by DD.

Earlier, Doordarshan, used to be held in the highest of regards for producing high quality content which no private broadcaster did. Even now, it has the potential and resources to produce shows which private enterprises cannot or will not pick up. DD can be used as the most effective medium for information dissemination about government welfare schemes and subsidies. It already possesses a network of regional language channels, which guarantees it an audience untapped by private national and international channels. However, without an urgent revamp, DD stands to lose the few viewers it still has.