Daughters of Clay: A Journey of 3 Women Artists

Daughters of Clay is a short documentary produced by P.C. Chandra Jewellers, conceptualised by JWT Kolkata and directed by Abhishek Sinha. The film, Kanya Rupeno in Bengali that is a rare tribute to the creativity, courage and determination of three pioneers of Kumartuli, the never centre of sculpting Maa Durga and other Gods and Goddesses for Durga Pooja and other festivals commissioned by people across the global map.

The film showcases the journey of three women who braved apathy, ridicule and gender bias just to follow their hearts and make something out of their lives. They are the flag bearers of women power in Kumartuli today. The film was released by the producers on September 24 on YouTube to coincide with agomoni or, the first day of Debi Pakhsha which also happens to be International Daughter’s Day.

The film is anchored by famous Bengali litterateur Bani Basu who has won, among others, the Sahitya Academy Award. She introduces us to three pillars among the few Kumartuli artisans who happen to be women. The three women sculptors /artisans featured in the documentary who talk about their struggles in this male-dominated cottage industry are China Pal, Mala Pal and Kakoli Pal. Interestingly, all three women stepped into the trade either due to circumstances or because they liked the artistry and the creativity involved and stepped in, much through their fathers and their husbands were against women entertaining this space. 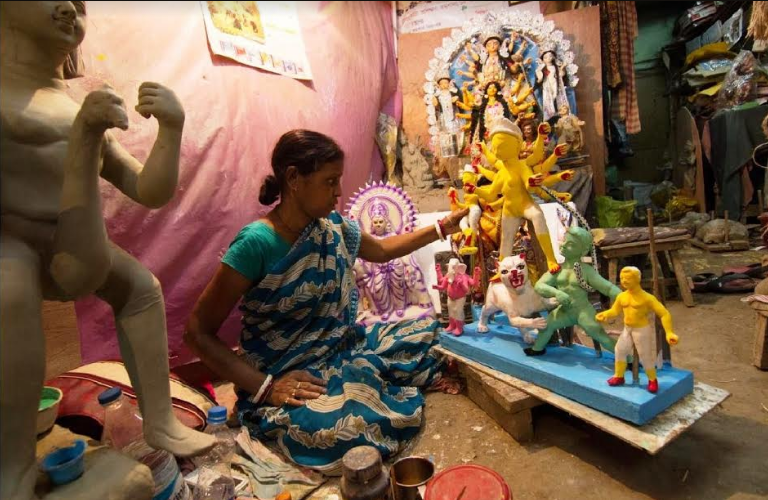 China Pal was the youngest of six children. Her father did not like it one bit when he found her playing with clay as a child in his studio. He did not stop her from her enjoyment but did not back her up either. “My father passed away in 1994 and I decided to keep his old studio running because there were commissioned orders to be fulfilled. Besides, I loved the challenge of stepping into a man’s world and of creating different models of different Goddesses myself. There were many who discouraged me saying it was a man’s job and asked me to sell off the studio. But I was determined to keep it running and now, I have a full-fledged workshop working almost round the clock just before the festival season begins,” she says. “My father was renowned for his ekchala thakurs (ekchala means Mother Goddess, her children, Asura and the lion are all placed under a single semi-circular backdrop) and I have followed his tradition,” she adds.

Nemesis played a decisive role in Kakoli Pal’s life, forcing her to join the idol-making fold. ”I was forbidden to even step inside a studio or play with clay dolls which was the fate of all daughters born into the family of idol makers. I never dared to dream that I would become a much-in-demand artisan one day. But it came in the wake of a tragedy. My husband Asim Pal, suddenly passed away just the day after Lakhsmi Pooja in 2003. The commissioned work had to be finished and my two growing daughters had to study and my life changed forever,” says Kakoli, wiping out the tear in memory of her husband. “The studio has been my home and my abode of peace and creativity. I have expanded the business. My husband could barely manage to create five to seven idols, I have been commissioned this year to deliver 22 idols of the Goddess,” she sums up.

Slim and dusky Mala Pal wears a sad expression on her face. She was very fond of making small, crude figurines out of wet clay. But her father did not quite care for her way of spending her spare time. “But my elder brother Kalu-da felt differently. He not only taught me the finer nuances of the art but became her mentor and encouraged me to follow my passion honestly. After father passed away in 1985, I decided to run his studio all by myself. Many of my peers in Kumartuli, men alone, resisted my entry into the art and business of this work but I was determined to go ahead and create something that would stand the test of time in my life,” she says. Customers who once deserted her studio only because they did not trust her as she was a woman, came back and her business grew rapidly. She concentrates on miniature idols of all Goddesses in the Hindu pantheon in the Bengali tradition and they are shipped right across cities like Delhi, Bengaluru and Mumbai and beyond Indian shores such as the US, Canada, Germany and Dubai. 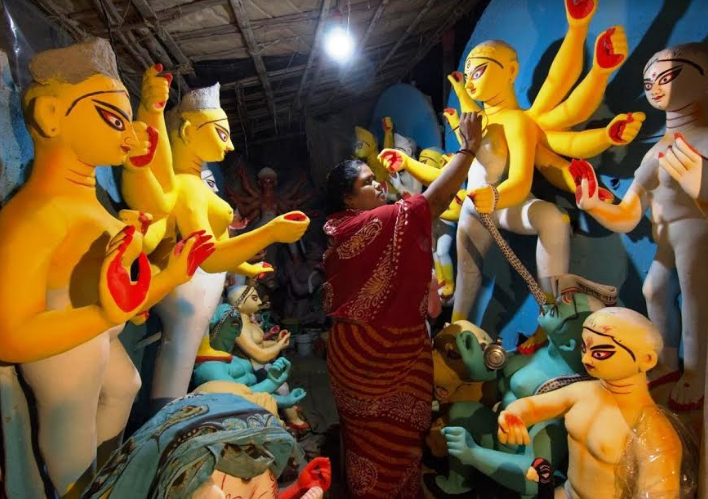 The only time we see Mala smiling in the film is when she puts on the gold chain gifted to all the three women courtesy P.C. Chandra Jewellers. Though this five-minute film is an ad film, its social agenda of paying tribute to the invisible women clay idol makers in Kolkata is commendable. But five minutes is too short for this kind of tribute. Besides, there are several other women clay idol makers in the business today. Namita Pal is placed in Potopara near Kalighat which is like another Kumartuli in miniature. Shipra Ghodui and Shibani Pal have their work units in Andul, some distance from Kolkata.

Each Durga ‘family’- Durga, her four children, Mahisasura and the Lion - takes around two months to complete and is priced within a range of Rs.10,000 and Rs.2.00 lakhs. Orders from abroad must be completed and shipped by April-May mainly through reputed couriers. They are packed in boxed made of ply shaped like cupboards and locked for security.

“We work with cement, plaster, bronze and copper because public tastes are ever-evolving. A truckload of sand now costs more than Rs.2000 while wet clay is priced approximately above Rs.800 per truckload. Clubs and collective organizations that place orders for idols often slip up when it is payment time. Many of them scoot off when we ask for payment. So, I have settled for family pooja orders because they are very good paymasters in terms of time,” says China Pal. 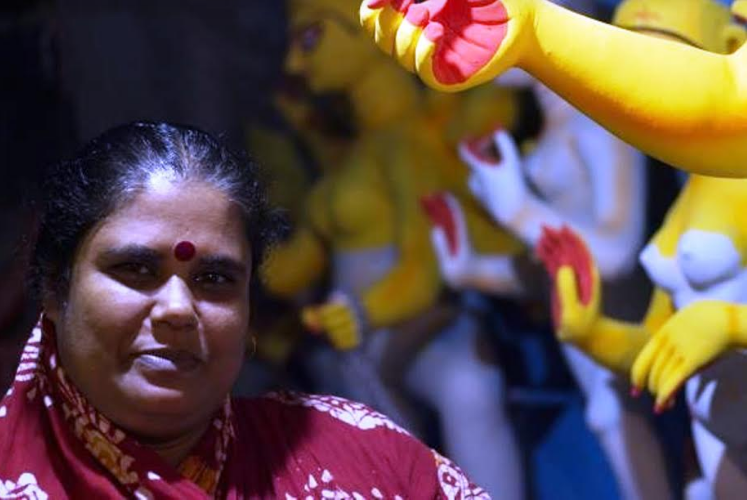 The rising price and declining supply of raw materials, constant and frequent power cuts, lack of space, lack of working capital and labour problems plague the idol-makers. “I generally take orders from 20 parties every year, and sometimes it crosses this mark. But the only way I can raise funds to begin my work is by raising loans from friends and relatives. I ran up a loan of Rs.45, 000 in 2004 and my nephews chipped in.

Otherwise, I would have been in the red,” says Shibani Pal. 46-year-old Namita Pal says that labour rates have risen. “But I cannot turn them down even when they are charging Rs.300 to Rs.400 per day because the workers have become a part of my family,” she says. “Every year, I tell myself, this is the last time I will do business in clay idols. I will have to find out something else next year with the expertise, experience and skill I have gained. 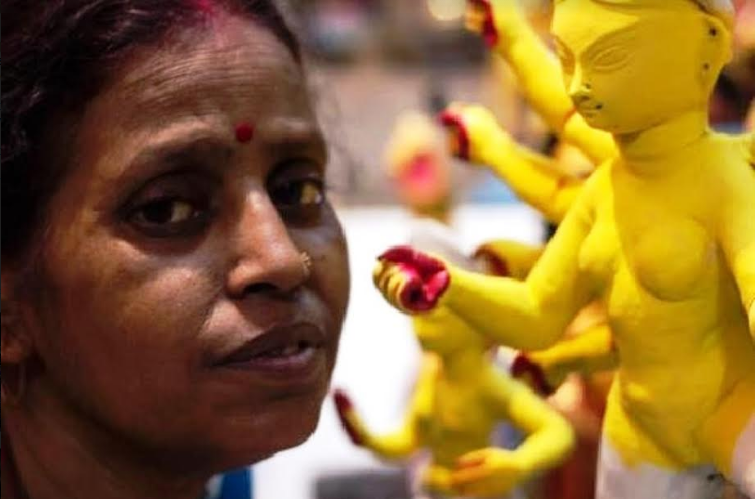 But as January approaches and orders for Saraswati idols begin to come in, I forget the resolution and get caught up in the web of orders, creation and tension,” says Shibani. But Namita, Shibani and Shipra are not in this film and perhaps, several others who continue to be victims of invisibility women are vulnerable to. Maybe another year, and another documentary will fill in this vacuum.