The Boulevard That Never Sleeps

Las Ramblas is synonymous with Barcelona… Most tourists identify the city with this landmark location. The central most boulevard cuts through the heart of the city centre and is a vibrant and lively promenade filled with Barcelona action at its best. If your hotel is located in this prominent area, like ours was, even better!

Las Ramblas is approximately 1.2 kilometres long with Port Vell (near the cruise port terminal) at the southernmost end and Plaça Catalunya at the northernmost end. The Gothic quarter is just a stone’s throw away. Las Ramblas is actually a series of streets that together comprise this much-loved and much-used pedestrian promenade. The main street, La Rambla, runs from the grand civic square of Placa Catalunya down to Port Vell, the old port, between the atmospheric medieval Gothic Quarter to the east and funky Raval to the west. The tree-shaded boulevard is lined with shops and cafés, flower stalls and souvenir kiosks, while the many street entertainers keep visitors amused with their mime, music and clowning.

The area is primarily pedestrianized with only two narrow one-way traffic roads which run on either side of the central Ramblas Boulevard. One thing that stood out and was omnipresent in full strength was the rather smart and deadly looking police force! They were everywhere and at their lethal best as we landed there just as the Catalan independence voting day was looming large and the issue of the referendum was at its peak. More on this in another piece! 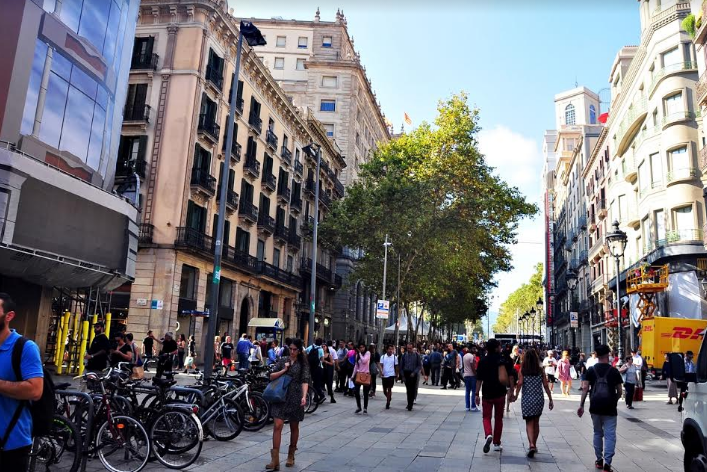 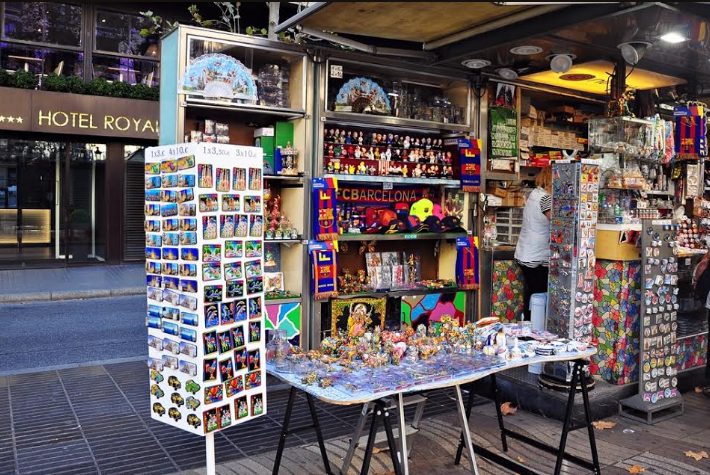 The Barcelona city council have restricted traffic flow through this region and you get the overwhelming feeling that pedestrians rule in this area (which makes a welcome change from India). Unlike other cities that have huge roads running through the middle Barcelona has chosen to structure the road system such that the heart of the city centre is primarily pedestrianized with larger roads that service the periphery.

This most famous street was once a river bed – now the 1200 metre boulevard is a major tourist attraction. Referred to both as La Rambla and Las Ramblas, the name comes from an Arabic word ‘ramla’ which means sandy riverbed. The dry river bed used to run alongside the old city walls.

The nights and day are filled with activity and there is never a dull moment: a few pedestrians seemingly in a hurry, others who stroll through the market area and stalls, and many who are found sitting on the numerous benches watching the world go by as they sip their coffee/tea or beer that is consumed by the gallons and is even cheaper than bottled water! 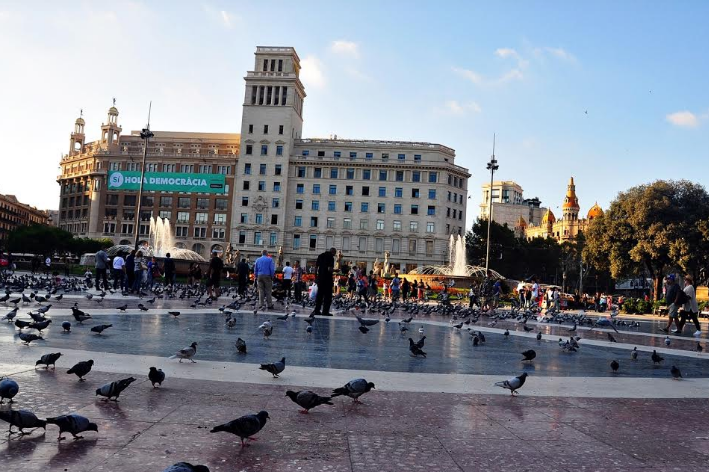 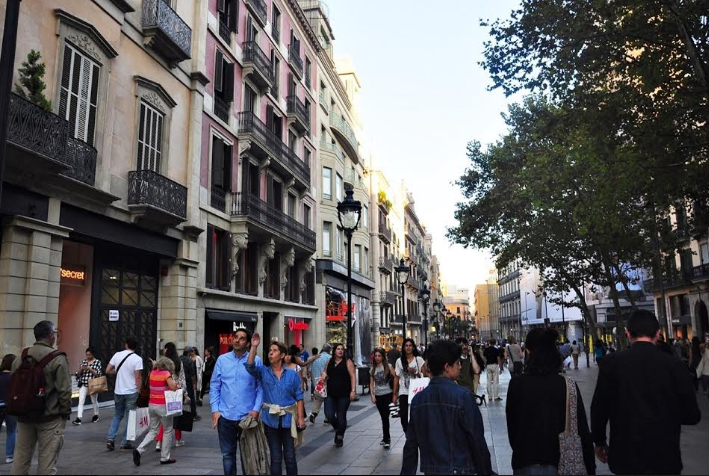 Street artists and performers are at every nook and corner and you can pick up some good sketches and paintings at a bargain if you are lucky. Nowhere are human statues more in abundance than on Las Ramblas. It's like walking through a sculpture museum; only the sculptures jump out at you! Due to the high number of performers, they are quite competitive and costumes outlandish.

There's more to the Ramblas street performers than just human statues, though. There are all sorts of acrobatics and dancing at various times. Barcelona's most famous street is both a tourist magnet and a window into Catalan culture, with cultural centres, theatres and intriguing architecture. Set between narrow traffic lanes and flanked by plane trees, the boulevard is crowded every day until the wee hours with a wide cross-section of society. A stroll here is pure sensory overload, with souvenir hawkers, buskers, pavement artists, mimes and living statues all part of the ever-changing street scene.

Cafes, bars and restaurants with their ornate terraces are another attraction. The Bouqueria market offers one of the most varied and appetising selections of meat and local produce – it couldn’t get any fresher than this! La Bouqueria is Barcelona's flagship food market… you can listen in to the voluble locals bargaining animatedly for fresh fruit, vegetables, dairy produce and seafood. This is a good place to pick up a snack to munch on later. 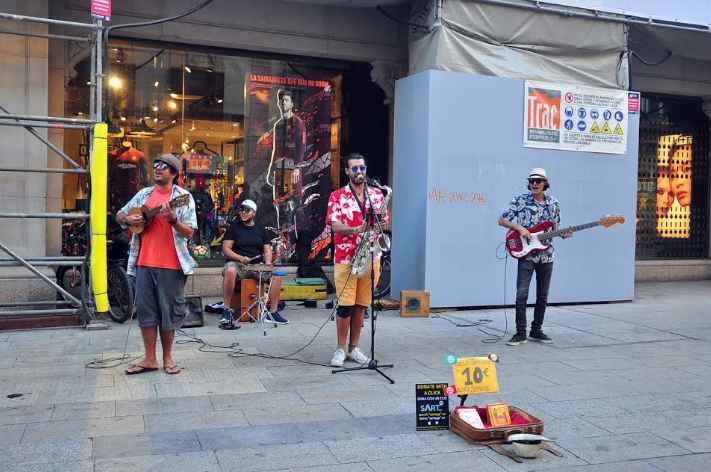 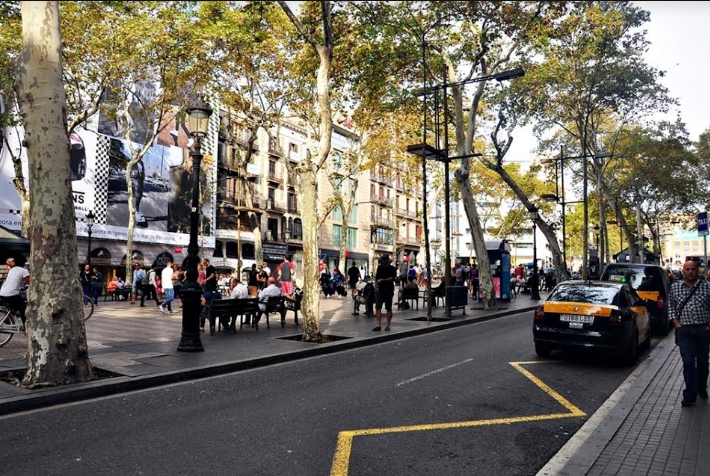 Towards the back of La Bouqueria there are some very good little restaurants serving excellent tapas, using ingredients bought from the market. It's a little pricey, but worth the money you dish out.

Even though we had been warned of pick-pockets and hustlers we didn’t face any issues or any form of discrimination in any part of Spain for that matter. Flanked by designer boutiques, branded stores and shops that had local artefacts, what I loved here was that everyone was non-assuming and minded their own business – people didn’t care how you dressed, what you ate and what you did… The informality of it all is what we need to learn. There are no show-offs or officious behaviour that is tantamount with Delhi. The people and fashion here are the coolest.

Barcelona without Las Ramblas would not be Barcelona! It was heart-warming to see how the city had bounced back after the recent terrorist attack. From the death, confusion and fear of the attack, the boulevard of Las Ramblas has returned to its historic role as a centre of life, reflection and defiance. The paving stones here send out messages of solidarity, love and defiance from around the world. The locals say: the people here cried but the spirit of the city is alive. The most common phrase during that time was “No tinc por” – the Catalan expression for “We are not afraid”.

I was told by the receptionist in my hotel that shortly before the Spanish civil war in 1936, the revolutionary poet Federico García Lorca described Barcelona’s main thoroughfare as the most joyful street in the world. It was he said, “The street where all the four seasons live together. The only street I wish would never end. Rich in sounds, abundant in breeze, beautiful in its encounters, old in its blood: Ramblas de Barcelona.”

Taking a leisurely promenade along Las Ramblas is equivalent to experiencing Barcelona life in all its colourful intensity. The place pulsates with life, from early morning when the locals come out to buy fresh flowers and breakfast pastries, until the last of the late-night party animals head for home in the wee small hours.

This historic area of Barcelona displays a fascinating diversity of architectural styles. About half way along you will find the Liceu Theatre, a grand opera and ballet house from the 1830s famous for its lavishly gilded auditorium. Nearby, look out for the eye-catching pavement mosaic designed by the Catalan surrealist artist Joan Miró. The initial stretch from Plaça de Catalunya is La Rambla de Canaletes, named after a turn-of-the-20th-century drinking fountain, the water of which supposedly emerges from what were once known as the springs of Canaletes. It used to be said that a proper barcelonin was one who ‘drank the waters of Les Canaletes’. Locals claim that anyone who drinks from the fountain will return to Barcelona, which is not such a bad prospect at all! This is also the traditional meeting point for happy FC Barcelona fans when they win cups and competitions.

The final stretch of La Rambla, La Rambla de Santa Mònica, widens out to approach the Mirador de Colom overlooking Port Vell. This section is named after the Convent de Santa Mònica, which once stood on the western flank of the street and has since been converted into the Centre d’Art Mònica, a cultural centre that mostly exhibits modern multimedia installations.

The southern end of Las Ramblas terminates at Port Vell. Here you will find some interesting old maritime buildings, notably the striking customs house which dominates the waterfront overlooking the ultramodern marina. Most of the clubs and livelier bars are at this end of the street and it can be noisy and boisterous at night. The seafood and paella here is unforgettable.

“Barcelona,” Don Quixote once exclaimed, is a “fountain of courtesy, shelter of strangers, hospice to the poor, land of the valiant, avenger of the offended, reciprocator of firm friendship, a city unique in its location and beauty.”