There are 16 short stories in A Word Uttered Thrice by Parveen Talha and each one of them is soaked in Lucknawiyat. This is not surprising as Parveen is a thoroughbred Lucknawi, a class of people who over eons of conscious and unconscious experiences remain convinced that all cultures are inherently plural, that no culture can exist without having engaged with people of other cultures.

Lucknawiyat means to refrain from restricting human experiences to one kind of behavior or one immovable geographical space. The attitude is to celebrate curiosity in the world. It is to be madly interested about other people and places on earth and to be generously open to others, in the hope of eventually experiencing that very elusive phenomenon called a good life. Diversity is at the core of a good life where creative dialoguing between various views of the world is shamelessly eulogized. 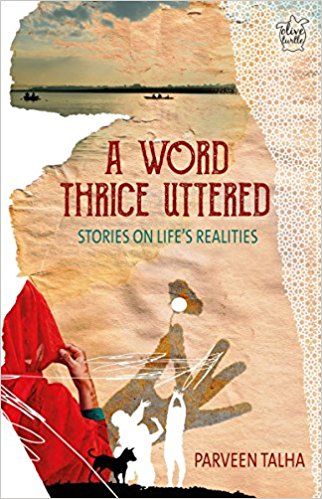 Lucknawiyat implies that human beings so far are aware of just a very tiny part of existence. To understand life and the self in a more wholesome way, it is imperative to seek answers not only in one’s own culture but also in the moral vision of others.

If Lucknawiyat were not on her mind would Parveen have ever penned The Magic Wand? Here the protagonist is as abstract as a feeling, that very special relationship between two human beings that seems to triumph over gender, religious and time differences to remain fragrant even half a century later. Truly magical!

I spied a bit of Lucknawiyat in Panditayin, a great example of the age-old practice of the Ganga-Jamuni way of life. Here a promise made by one human being to another human being is considered far more sacred than an individual’s affiliation to a particular community or to a religious group.

At last Panditayin spoke, ‘Has anything changed, my child, by my telling you this? Have I changed? I am your mother since you entered the world. And I will remain your mother not only till I die, but in every life. Birth after birth.’

When human beings are able to practice patience and restraint that is another glimpse into Lucknawiyat like in Let Sleeping Dogs Lie:

Life moved on, while Hafizji and his two brothers lived with their children in this world. And life moved on even after their exit. There were Ups, like when Razia became a dentist and Ghufran and his two cousins became engineers and got good jobs. And also when Mansoor and Arif with their younger cousin Rizwan became owners of a most sought after eatery which had several branches in Lucknow. And Downs! It was a terrible Down when Razia’s husband, an associate Professor was arrested in a case of bomb blast. And Ups again, when he was let off after twelve solid years, for lack of evidence. And all those twelve years the family continued to fight together for the truth. They knew he was innocent.

I love the way some female protagonists in different stories handle men who have walked into their life on their own terms and exited, without concern. Here is Nayyara’s response in Thanks for Ditching Me to a man most irresponsible:

Nayyar’s smile became broader. ‘Actually I should have come to you, to thank you for ditching me. Could I have reached this position, had I, God forbid, married you and could I have then got a husband, as honest and affectionate and of a high status as my husband Riyasat?’ Imran’s face drained of whatever blood there was in his veins. She added, ‘And let me inform you. A modern married woman doesn’t change her name. She has a right to her own name.’ Looking pointedly at the clock on the wall she said, ‘Thank you for your visit,’ and calmly resumed her work, without once looking up at Imran, staggering out of her office.

When Major Ilahi Bakhsh decides to make a home in Pakistan in 1947, Rustam is unable to go with the family. Rustam is left behind in Lucknow because he is a horse and it is impossible for the family to transport him and the stately carriage drawn by him.

’I am taking my two daughters with me but I am leaving my son with you,’ Begum Ilahi Bukhsh said to the family that had agreed to buy Rustam and the one-horse carriage for Rs. 300.

At last he came to my father, put his chin on his shoulder and let out a heart-rending wail once again. Father kissed him on his forehead and hugged him like Begum Ilahi Bukhsh had done on that fateful day, so long ago. The next minute Rustam moved his face from father’s shoulder to his knee where he rested his chin just for a split second and then kind of slipped away gently on the ground. Father bent down to caress him. But Rustam did not respond. He was no longer in this world.

When father returned home with his body, there was a telegram waiting for him from Kubra in Pakistan:

MOTHER PASSED AWAY THIS MORNING…

Centipede is very funny. The contrast between a traditional, and a modern bride is not to be missed:

When Asiya recovered from the shock, she asked just three questions, one shorter than the other-
‘Is she really the bride?’
‘Is this her manjha?’
‘Is this Lucknow?’

Trial and Punishment seems to suggest that it is in the interest of one and all when human beings do not take the law into their own hands. The ruthless chaiwala Chaudhry is eventually punished by time for having bought and sold children in the past. Here is what happens when Irfan returns to the site years later as head hawaldar.

…an old man in rags sat on the ground with his head bent. Irfan went up to him to find out about the teashop. ‘Baba, there used to be a teashop here, why is it closed today?’

The old man looked up with expressionless eyes and said, ‘Which teashop? I don’t know. I haven’t eaten for two days.’

As the man looked up, Irfan realized he was Chaudhry. He put a big note in his outstretched hands and walked straight into the office.

In another story Kausar receives a letter from England. It is from her husband. She tears it open in excitement only to read the same word written thrice. Talaq, talaq, talaq was sent to her by post. Soon after Kausar was forced to spend the most glorious period of her life running from pillar to post to feed and to clothe her son, and herself.

Sometimes the worst of misfortunes, the deadliest blows of fate, can be the precursors to the advent of good luck and the light at the end of the tunnel. Kausar was sixty-five when she saw that glorious light. And she and her son lived happily ever after.

(A Word Thrice Uttered by Parveen Talha is published by Niyogi Books, 2017).