'It was a meeting of souls in art and life'

Pablo César is Argentine, born in Buenos Aires started making films at the age of 13 when his older brother José María, a short filmmaker, gave him a Super 8mm camera and taught him the first techniques to film. He is a professor at the University of Cinema in Buenos Aires since 1992 specialized in the "Production and Marketing" and "The Cinema of Author". He received international awards and also participated as a jury in the festivals of Amiens (France), Montreal (Canada, Young Film Festival), Kelibia (Tunisia), Huy (Belgium), Hyderabad (India), Ouagadougou (Burkina Faso) and Pune India).Till date, he has made eleven feature films of which his latest, Thinking of Him is the closing film of the 48th IFFI at Goa. He talks about his feelings about the film and more to SHOMA CHATTERJI

How does it feel to have your film as the closing movie of IFFI, Goa?

I feel truly honoured that the IFFI director, Sunit Tandon and the film selection committee chose this film as the closing film. It is the best thing that could happen to us, to screen the film at Goa as its World Premiere. I have a relationship with IFFI since 1994 when I was invited to present my third feature film "Grey Fire". I was also a jury in 2007.

Thinking of Him deals with the relationship between Rabindranath Tagore and Victoria Ocampo when the poet lived in the country for two months. What motivated this film?

It began in 2008 when I met the Ambassador of India, Mr. R. Viswanathan, in Argentina who knew my films. He said that it would be very important to have a long feature film that told the meeting between Rabindranath Tagore and Victoria Ocampo in 1924. I loved the proposal. I knew some of Tagore's writings, especially Kabir's translations but I had also read "Purabi".

How did go about your research on the subject?

I met Jerónimo Toubes, Argentininian scriptwriter. Jeronimo made a trip to India in 2009 to research the subject. We also contacted specialists Professor Gustavo Canzobre in Argentina and later professor Shamu Ganguly in India. We loved Ketaki Kushari Dyson’s In Your Blossoming Flower-Garden which is a deep work on the relation between Rabindranath Tagore and Victoria Ocampo. We read all books concerning the educational work of Tagore in Bolpur, Shantiniketan, since the focus of the film, although it is the relationship between Tagore and Ocampo, is the fascination of Victoria in the vision of a man on the education of the human soul.

How helpful were the books by Victoria Ocampo and the letters exchanged between them for the film's research and scripting?

Victoria Ocampo’s Tagore in the ravines of San Isidro, as well as the letters revealed the mutual fascination between the two. It was a meeting of souls in art and life. Victoria was a special woman who stood out for her bravery before a “macho society” of the early twentieth century. Reading Gitanjali helped her transform her life.

Is the relationship of Rabindranath Tagore with Argentine writer Victoria Ocampo well known in your country?

The relationship is known by people who are interested in literature, poetry, etc.... Currently the family home of Victoria Ocampo is owned by UNESCO and remains as it was. Today it is known as "Villa Ocampo" and can be seen on the internet on http://unescovillaocampo.org/unesco/

How did you approach their story, considering both are revered and icons in their respective countries?

The first thing I proposed to myself and to Jeronimo, the scriptwriter, was to work only on real facts about the meeting between Victoria and Tagore. In no way would it have occurred to me to construct scenes that did not exist or, at least, that have not been told in the letters or in Victoria's book. Everything in the film is what publicly exists in books and publications. It is very delicate and a great responsibility to make a film of this magnitude precisely because of what you mention: they are both icons in the respective countries. The work of Gurudev Rabindranath Tagore is huge and I have deep respect for it.

How did the Indian producer and Victor Banerjee step in?

I met Mr. Suraj Kumar, CEO of Johnsons-Suraj Films International in 2014. We signed the co-production contract in 2015, agreeing on each one's responsibility for the production of the film and that is how the film was made. He had suggested Naseeruddin Shah at first but due to date problems, we had to shelve that idea. Then the idea of seeing Victor Banerjee and asking him to portray Tagore came up. Victor gave me a beautiful version of "Gitanjali", which is a facsimile of the original manuscript. . Victor gave me a lot of confidence to do the complex job of interpreting Tagore. Once I had the man, I had to find the woman. Returning to Argentina, I thought about - Eleonora Wexler. She had played a small role in my Grey Fire. Eleonora is a very famous actress in Argentina, now. 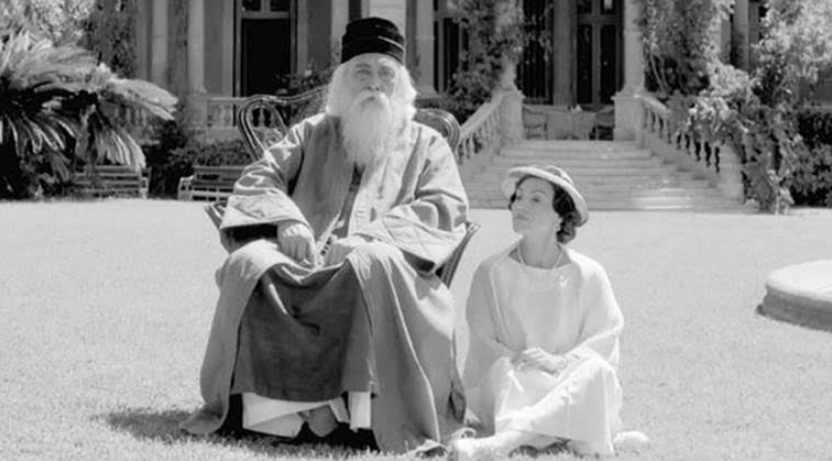 Your film has two parallel tracks. One is the present shot with Raima Sen and the Argentinian actor who, in the film, represents the present while the Black-and-White segments show Tagore and Ocampo. Why?

I wanted to emphasise the universality and timelessness of Tagore and his relationship with Ocampo. I needed to bridge the past and the present so I have Raima Sen who helps the Argentinian researcher and shows him across Bolpur and Shantiniketan in the film. You watch the film and that will tell you how the past and the present jell and whether they jell at all or not.

How well acquainted are you with Indian cinema. Who are your favourite Indian filmmakers and what their films that you admire?

I must say that, although I respect the musical films of India, it is not the genre that attracts me. It is a question of habit, it is cultural. There are no good or bad movies. There are films that attract us more than others. I consider Satyajit Ray to be the greatest filmmaker of India so far. But I think I still need to see much more. Two years ago I was a member of the Official Jury of the Pune International Film Festival and I had the pleasure of discovering many Marathi films.