Celebrating the Nostalgia of Khirkee

Celebrating the Nostalgia of Khirkee

A crowd huddled near a narrow lane in South Delhi’s Khirkee extension as inquisitive on-lookers continued to join in. Inside a small basement, a pop-up studio for the ‘Khirkee Talk Show’ was being set-up. The talk show featured Lawrence, who is from Nigeria and a few other residents of Khirkee. Over piping hot cups of tea, the participants came together for a free-wheeling conversation that addressed the many myths which had driven a wedge between them.

The talk show, a collaboration between Khirkee Storytelling Project and Khirkee Voice, was a part of the Khirkee Festival organised by Khoj International Artists’ Association. The four-day festival which started on December 14 included interactive installations, exhibitions, workshops and performances that celebrated the cultural diversity of Khirkee.

During the talk show, Lawrence and the participants engaged in a candid discussion to understand each other a little better. He asked the participants about why many Indians viewed African nationals as “people who exist in the jungle part of the world” despite there being a long history of Indo-African ties. By the end of the discussion, many agreed that there was a need for a greater cultural exchange.

For Mohammad Hasan, a keen participant, the Talk Show was an eye-opener. He said, “After listening to this show, I feel that it is us who tend to believe in all the false rumours. We never really got a chance to speak with them openly but after today, I hope that it changes.” 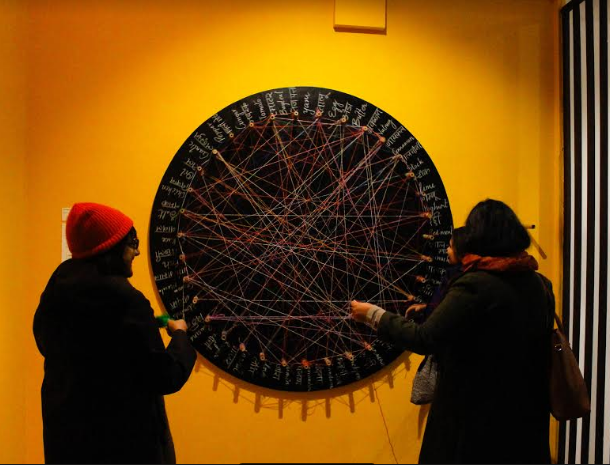 The festival curated installations created by artists-in-residence Rajyashri Goody, who is from India along with Afghanistan’s Aziz Hazara and Nigeria’s Tito Aderemi-Ibitola. Rajyashri’s wooden installation had names of ingredients that are commonly used in the preparation of Afghani, Indian, Ivory Coast dishes.

The audience could spin the circular installation and use spools of threads to connect the ingredients to create new recipes. “Food can signify many things. It can bring people together or it can even show divisiveness. Through food, I was exploring the other ways of looking at history,” Rajyashri said.

Also on display, were the works of photographer Vinit Gupta who had captured the stories of refugees and migrants living in Khirkee through black-and-white portraits. The festival featured a performance by the Khirkee Music Ensemble, where artists came together to perform a medley of songs from India and countries of Africa.

Curator of the festival, Radha Mahendru believed that arts could help transcend rigid boundaries and initiate a dialogue. She said, “The love for arts, music and food is incredibly powerful. Through this festival, we wanted to move beyond politics and make possible a cross pollination of networks and ideas.” 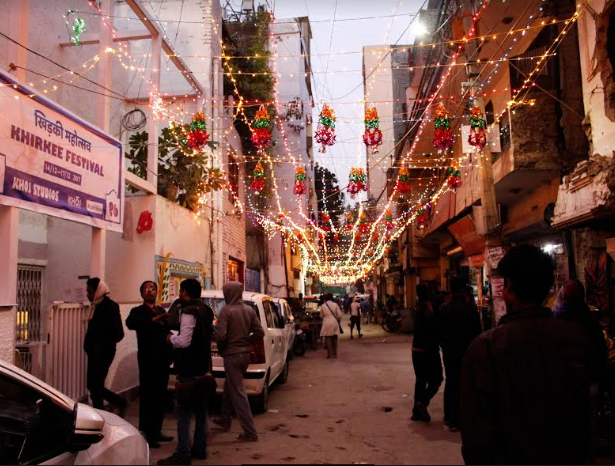 For those living in Khirkee and nearby neighbourhoods, the festival could not have come at a better time. Given how the year was marred by incidents of racial attacks against African nationals, the initiative was welcomed by many.

Yues Ta Bi Dje, a 35 year old resident of Khirkee extension, felt that it opened up a space for honest conversations. “Yesterday, I cooked Alluco, a traditional dish from my country, Ivory Coast. Within minutes, I was surrounded by people who were excited to try what I had made. By the end of it, we all talked about food and even politics.” He recalls how many of his friends left Khirkhee extension a few years ago after facing harassment and discrimination.

But Yues could not bring himself to leave. “It’s the nostalgia of Khirkee that stopped me, you know?” he added.