C'mon Virender Sehwag, At Least Get Your Facts Right

Shame Sir, you have lost my vote!

What can we do when a cricketer, Virender Sehwag, who has fed off the best in the system decides to play divisive politics. And tweets along with a photograph of the hapless Adivasi youth lynched by a Kerala mob, not to condemn the incident but to reel out a few select names of the assailants. The usual minority bashing, that becomes far more sinister and of course viral when a supposed celebrity attaches his name to it.

This is how Sehwag expressed his ‘concern’: “Madhu stole ikg of rice, A mob of Ubaid, Hussain and Abdul Kareem, lynched the poor tribal man to death. This is a disgrace to a civilised sociwty and I feel ashamed that this happens and kuch farak nahi padta 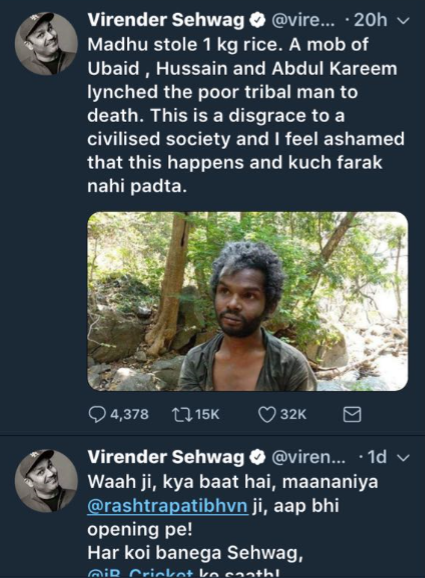 And then does not apologise when twitters take him up on it including more famous, and certainly a true Indian, Ramachandra Guha takes him on it with, The Army Chief playing communal politics, now a former cricketing great: both a disgrace to the India that Ambedkar, Azad, Ganhi, Kamaladevi, Nehru, Tagore built and nurtured.” 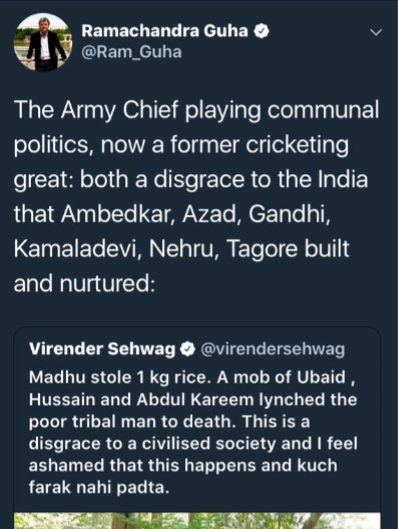 The storm on Twitter was followed by a second tweet from Sehwag where he said “non acceptance of a fault i itself a 2nd fault. I apologise I missed out on more names involved in this bcoz of incomplete information & sincerely apologise 4 it but the tweet is not commnal at all. Killers are divided by religion but united by a violent mentality May there b peace. 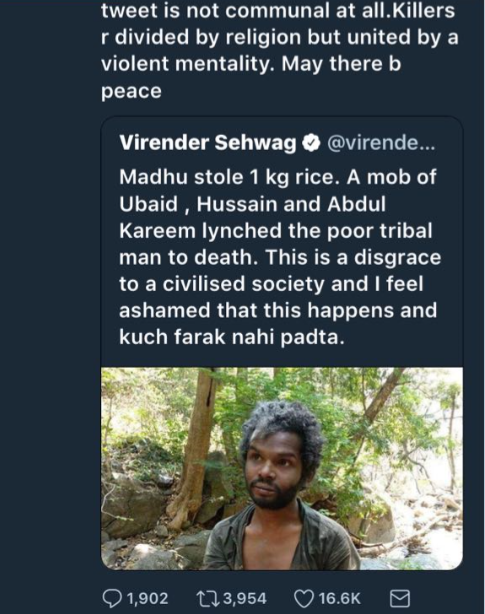 Note the numbers in each of Sehwag’s tweets that tell the story. The first recorded 15 K retweets, the second about 4000. And despite the ‘apology’ after the protest, he still did not disclose the full facts by adding the other names of the accused. As such the first tweet has fed into the communal discourse that seems to also be attracting top celebrities from different points of view.

One the names of the 16 persons accused in the terrible attack on the poverty stricken, hungry, adivasi youth have appeared in the more responsible media and read: Hussain,50, Marakkar, 33, Shamsudheen, 34, Aneesh, 30, Radhakrishnan, 34, Abu Bakr, 32, Siddique, Ubaid, Najeeb,Jajumon, Addul Kareem, Sajeev, 30, Satheesh, 39, Hareesh, 34, Byju, 41 and Muneer, 28. The list is reflective of any cluster of shops in any part of India, a mixed population unless directed otherwise by political and vested interests. Reports indicate that this was not planned, but spontaneous which does not make it any better, in that the better to do attacked and beat a poor man for allegedly (without proof) stealing a paltry sum of goods.

Even the BJP had not given it this twist, at least openly till now, but Sehwag with his millions of following and celebrity status gave the twist---and how!---through this one tweet that went viral as soon as the last letter was typed by him. The questions that this raises is:

And finally we are tired of celebrities rushing in with nasty tweets that have lasting impact on harmony, More so as these people sitting atop the Indian pyramid with all the riches and fame ths country can offer, rarely ever come out to take the side of peace, secularism.Constitution, people at large. Every person with any conscience has attacked the brutal lynching in Kerala. But Sehwag is perhaps the first in his celeb space to actually twist the attack with ---to put it very mildly-- a highly divisive and irresponsible tweet.

Shame Sir, you have lost my vote!