'A Mother Whispering, 'Najeeb,Mera Beta', A Friend Raising Her Fist to his Name'

'A Mother Whispering, 'Najeeb,Mera Beta', A Friend Raising Her Fist to his Name''

In these poems, the versatile Nabina Das sings into the dark times. She scoffs, satirizes, ridicules, insults, curses and reproaches those responsible for this darkness. Probably for the first time, poetry in Indian English speaks here in a direct political voice with immediacy. Nabina records the cruel, absurd and macabre drama that is being played out by the ruling communal forces in India and creates another Toba Tek Singh to express a poet’s anguish over events like the lynching of innocent Muslims, the slaughter of children by depriving them of oxygen in a Gorakhpur hospital, and people being branded ‘antinational’. Her pen has a ‘rebel ink trail’ that writes ‘elegies in anger’. This collection establishes her as a serious political poet of our times.

"Reading these poems is akin to sitting at a banquet table. There is an extraordinary, barely contained passion to be found in them, startling and resonant images of both the personal and broadly political, and an inexhaustible, energetic engagement with the turmoil that is life." -- Mona Zote

An extract
reasons for existing

Just because we have rains
out tears don’t stop

From door to door, there are X marks
someone is missing
and like the story of Ali Baba
we’re trying to find out where
his last expression left its damp print

Just because there’s oblivion
a memory cannot go to fallen leaves
a mother whispering, ‘Najeeb, mera beta’
a friend raising her fist to his name
the four walls remembering his shadow
shoes, book shelves, and the clock’s tick —
a calendar watching over a lost name

My neighbour is a gau-rakshak

Everyone has a gau rakshak neighbour these days
not everyone knows what they look like
we say happy Diwali sirji, and how’s the weather today
we eat cake, madamji makes sherbet when we meet.
I could even have a lover who’s a gau rakshak so tender
that he keeps me from all untowardness of nights.
Our gau rakshak neighbour wears branded jeans
he hates Chinese goods but flaunts a Swiss watch
she too likes kitty parties where Ramdev churan churns
Zara scarves with Kolhapuri sandals for the ladies, kyunki
after all, Musalmanon me hunar toh hai for craft and art
thus my gau rakshak friends make light of life.
When we meet we say pleasantries like the rain
until my inshallah waterlogs their ears, they seem stunned:
You JNU-wallahs are like that only no, they say
a little wanton, a little awaara, somewhat misfit
still I recite Bhakti poetry and often placate the bhakts.
Our gau rakshak neighbour asserts Hindu khatre mein hai
the sky is saffron, the cow mothers turn plastic bags to manna
Our conversations span all greatness of Bharat Mata Shri
then Nirvana becomes a Bengali mithai he offers me with tea. 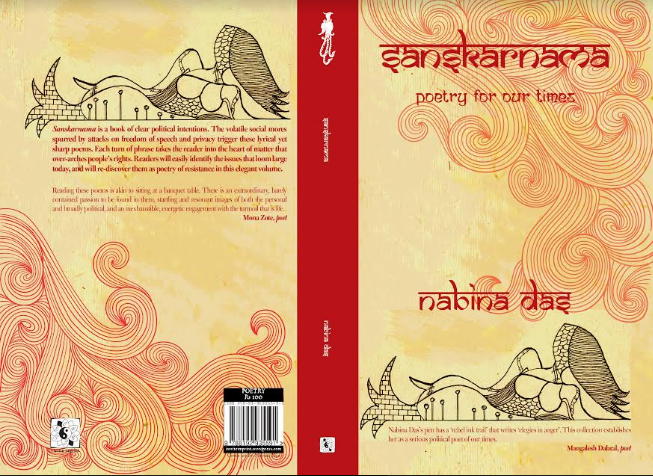 the river has descended on our conversation
the river needs no name no evocation
its daybreaks and evenings are silked along its route
hyacinths float up to its fairy span and everything
is folding in for the man river, its red eyes and tears
everything is what they are bending down to cleanse
each palmful of water losing its sparkle in the din
the flotsam too frothy and fickle to be called a blessing
to be offered a chant

the chorus anyway doesn’t save the dolphins of twilight
the flood still rages forward carrying plastic bags, discarded
condoms, the surf of human excreta, dead cattle, and the elixir
of waste dripping from our human errors
one drop by one drop by one

the chant doesn’t raise the dead children, their
eyes water-soaked pale flowers, their
teeth clotted in the water’s rush, seeking mothers’ arms
they need no evocation, no chants
the river needs no alms, it needs
only a daybreak, only a course to flow as freedom does
singing

(Namami Brahmaputra was a scheme launched in Assam apparently in reverence of the river Brahmaputra and to create flood awareness. It involved huge expense of taxpayers’ money, fanfare and worship by priests. Later the state was deluged by one of the worst floods in recent memory.)