Hichki: Much More Than A Hiccup

From the personal to the political

Hichki is much more than Tourette’s Syndrome,which, simply defined is a genetic disorder characterised by vocal and motor tics. There is no cure for it till date.

Hichki is a dynamic film filled with action and movement, social, emotional, psychological and even geographical, mapping the rough and tough upward climb of its cheerful yet cheeky protagonist who, never mind her TS, does not mince words when she needs not to. The director takes us on a sometimes happy, often sad, often frustrating roller-coaster ride as we slowly, unwittingly get sucked into Naina’s struggles and begin to participate in it, albeit as audience.

One needs to take one’s hat off to director Siddharth P. Malhotra for making a full-blooded, family entertainer with generous doses of education and information woven into the different layers of the film without screaming from the rooftops.

One might at times feel that there is an overload of pontificating. But these too, are knitted into the script so seamlessly that this adds to the intelligent sarcasm that happens whenever the snob Mr. Wadia with a major attitude problem and Naina cross swords several times over their respective perceptions about ‘students’ and ‘teachers’ and the ‘class’ they belong to.

The editing is jet-paced and razor sharp without softening at moments that capture the horizon on the beach with the boats waiting to sail. The cinematography is no compromise on the serious message and is as beautiful as it ought to be

The behaviour of a person suffering from TS is characterised by vocal and motor tics that seem confusing, funny, irritating and intriguing to people who see the person making loud, involuntary sounds like hiccups specially, when, like Naina Thakur, the protagonist, shows the tendency of making loud, involuntary sounds and swinging her head to the side while touching her hand to her chin, which aggravates when she is placed within some aggressive and sensitive and nervous situation.

Hichki is not just about Naina Mathur trying to rise above her handicap of Tourette's’ Syndrome and facing blocks every step of the way. It goes much further to cover a whole range of sociological issues turning Naina into an agency to further causes other than her own. We learn, through subtle suggestion, that her problem was the main reason why her parents separated when she was small and her mother chose to stand by her daughter, and son, come what may. This focuses on how a child’s genetic handicap, even when she is otherwise an intelligent achiever, can make a father turn away instead of standing by her and supporting his wife.

One learns that even academics with a long list of degrees and long track records, have not heard of Tourette’s Syndrome and the symptoms it is identify by. Naina wanders from school to school looking for an opening for a teaching position.

“Why don’t you opt for something other than teaching?” one interviewer asks her and she says, that is what she has dreamt of all her life and she won’t have it any other way. That is Naina for you who is determined to realise her dream even when she lands a job in a high-fi school where she has to teach 14, ill-mannered, naughty and crude children from the neighbouring slums brought in by the school against its wishes because the RTI Act made it mandatory for the school to engage in this social agenda. This class is called 9F and though it is within the school premises, it does not really “belong.”

The teachers avoid it like the plague, the mainstream students with their noses high up in the air do not mix with them and make them the object of their ridicule, till these children lose their will to study and better their lives.

It turns out, however, that the RTI was an excuse to appropriate the land adjoining the school compound where once, a municipal school stood and which these slum children attended. When there was no school for the children to go to, the school opened 9F division to allow access to 14 very naughty boys and girls.

How Naina managers to bring them round, with other kinds of hiccups all the way, how they begin to identify with her inner pain of failing to educate them, how they unwittingly unfold their intelligence to the perceptive Naina through the very pranks they indulge in to throw her out of the school like they did with the other teachers, brings in other sub-plots no less important than Naina’s own.

One touching comment comes across when none of the parents of 9F come to attend the Parent-Teacher Meeting and Naina sits in an empty class, waiting. She decides to find out by visiting their homes. One father has gone out to fish, which is his vocation. A mother is at her vegetable stall, selling her greens. A third is his bicycle repairing shop. They have no clue about any PTM and even if they could have come, work compulsions and the embarrassment within an elite group would have kept them away, anyway.

Every single child from this class is a fantastic discovery in terms of performance and one needs to also include the snobbish first boy and the down-to-earth friendly girl from the mainstream classes. “Intelligence has no class” is one of the several messages that hits you as the film unfolds. The kids force you to love them as much as Naina does, so authentic they are in their body language, their dress sense, their ‘attitude’ and their anger. The film through Naina, dispels several myths including the one that states that one needs “class” to be intelligent at academics or in complex science projects.

Among the few things that seem to have gone overboard are – the paper leaks by the peon in connivance with the school’s first boy and, the overstretched sense of disgust and hate in Naina for her father that suddenly melts in a single instance of hand-holding which is a bit too much. Besides, what happens to the other slum children apart from these 14, no one seems to bother about.

Few among us may have watched Front of the Class (2008), a Bollywood film adapted from a book of the same name. But it does not matter. Hichki does not need to lean on any foreign adaptations and Malhotra, with his uncanny sense of the creative, has proved it.

However, Rani Mukherjee does it once more with three wonderful, offbeat performances in a row, or four, perhaps if one includes Black. Her Naina Mathur is one of the most lovable young teachers one has encountered in Bollywood films in a long, long while and this includes our Amir Khan as the innovative arts teacher in Taare Zameen Par.

In one film after another, over the past decade, Rani Mukherjee has proved that she does not need a romantic angle, a romantic hero in her past, present or future, does not need a song-dance number to make a film stand on its own feet with the solid support of a wonderful supporting cast. “Success” says Rani Mukherjee through her films Black, No One Killed Jessica, Mardaani and Hichki, ”does not depend on bubbling youth, on a six abs hero with shoulders you can lean on, on generous skin shows through song-dance numbers.”

Hichki is as much an “Indian” film as is its protagonist, Mukherjee. It is one of the most outstanding examples of how cinema can turn the personal into the political without being loud about it. 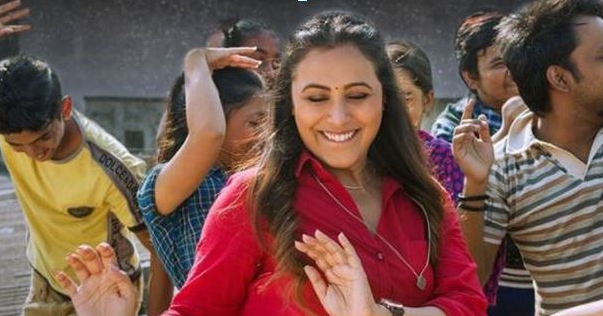