Venkadarath Saritha, a 30-year-old contractual bus driver with Delhi Transport Corporation (DTC) has not taken a day off from her work from last three months – not even on Sundays. She drives a bus for eight hours daily and repercussions of not turning up on duty include a cut from her already meager salary.

“I am so tired with all this that this is taking a toll on my mental health now,” Saritha says, adding that we (contractual employees) are treated like robots not humans.

Arun (28), a conductor with DTC from five years says he is miffed with government’s approach towards their ‘ill-treatment’.

“See the discrimination,” he says; “the more we drive the bus the more we will get paid. For earning more I wake up early at 4 AM to reach the depot. But buses are allotted to permanent staff first and they never come before 9 AM.”

Arun says they get to drive (and earn) only once the permanent employees are allotted buses. Otherwise, they end up going home without earning anything that too after hours of wait. 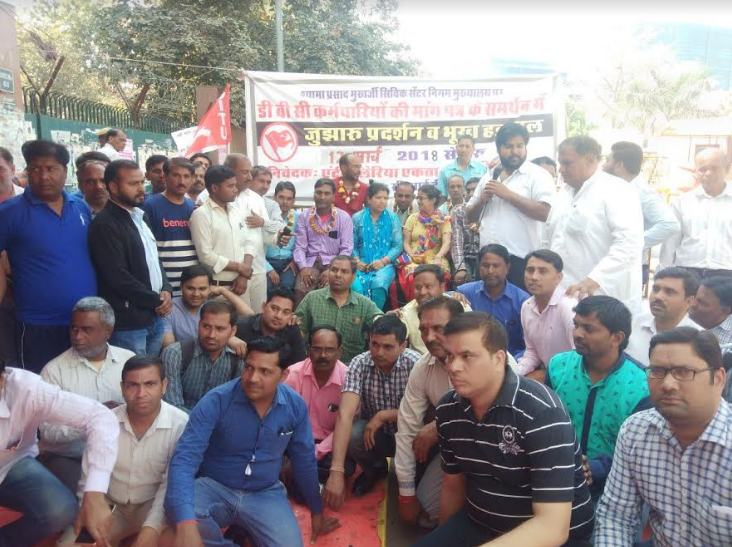 In February, contractual employees launched an agitation to press for incentives the permanent staff is enjoying.

Instead, Delhi government sent a show-cause notice to the 13 union members for protesting.

“Babus at DTC have charged 13 employees with provoking the employees. If fighting back for rights is provocation, then we should be booked,” Jha said

“They even threatened eight more employees by sending them termination letters, but since the protests intensified after the move, they were forced put it on hold,” he added.

Employees also express their lack of faith in judiciary after dilly dallying approach by the labor court. “We went to the labor court this month. On the first hearing on April 13, the labor court sent our case to the Dwarka fast-track court. We will get a new date for hearing in 15 days,” said Balmiki.

On being asked whether they have approached the chief minister’s office regarding their grievance Balmiki said “Whenever we approach CM’s office they direct us to LG’s office and vice versa, so we are in a conundrum as what to do.”

Desperate, the employees are planning a protest against the government on International Labor day on May 1.