No road. No electricity. No network. No internet.

This might sound like the premise of a rough-into the wild reality show episode, but for hundreds of people in remote villages across India it’s part of their everyday life.

At Project FUEL, an organization that documents human wisdom, we have been passing on life lessons of people for a long time, in diverse ways. But even in this long drawn journey of working with vulnerable communities across the globe, ‘Khati’ was different. It challenged us to leave our distracted minds behind and submit ourselves completely to the ‘now’ of the mountain and it’s people. 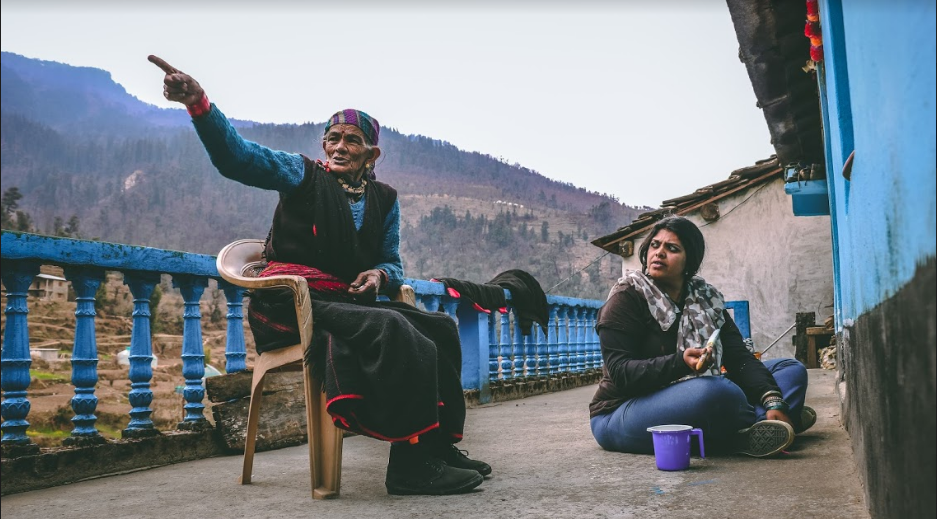 Set on the foothills of the Pindari Glacier, Khati is a remote village in the Kumaon region of Uttarakhand. The village witnesses significant footfall of trekkers on their way to the Pindari, Kafni, and Sunderdunga glaciers. Despite its rich history and culture, the residents of this century-old village often face hardships due to lack of roads, healthcare, education, and electricity.

The Wise Wall Project by Project FUEL was born with the intent of documenting rural wisdom from communities long-forgotten or migrating from their roots to urban landscapes for better livelihood opportunities. In an attempt to bring social visibility to the village we collect and paint life lessons of the villagers on the walls of their houses. Through personal interviews, conversations and community meet-ups one is able to unearth personal stories along with life experiences, folk tales and stories of the village. 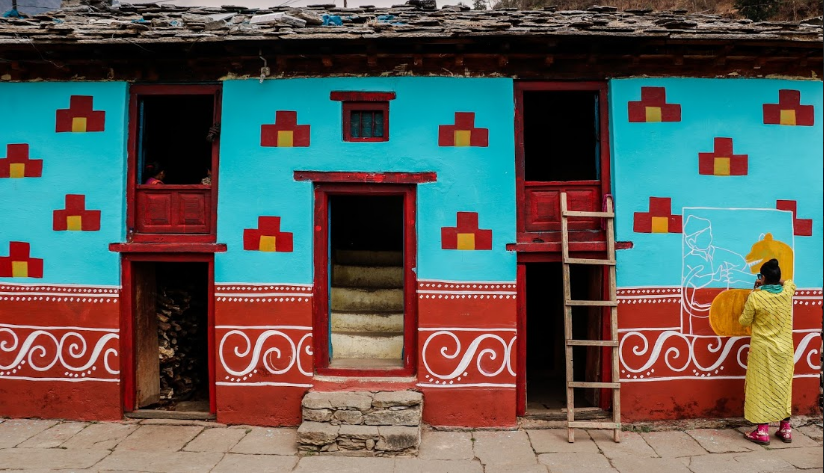 We had painted world’s first village of life lessons in 2017 – Saur. This 600 years old village has been declared as a 'ghost village' due to the excessive migration that has taken place in it. Only 12 families are left behind in the village. Most houses lie in a dilapidated and abandoned state.

After Saur, what drew us to Khati were two important facts. One, that it was the last village on the Pindhari Glacier trek route and saw an incoming and out-going of many travellers and trekkers. Second, The Hans Foundation, a charitable trust fund that provides an endowment for not-for-profit organisations operating in India, was already running an integrated development program in the region around Khati - a total of eight villages divided into hamlets, scattered throughout the ranges. Khati was the only village out of the eight to exist in a cluster of houses together, as opposed to the sparsely spread out infrastructure of the others, Khati made it possible for us to live within a community and work with them. 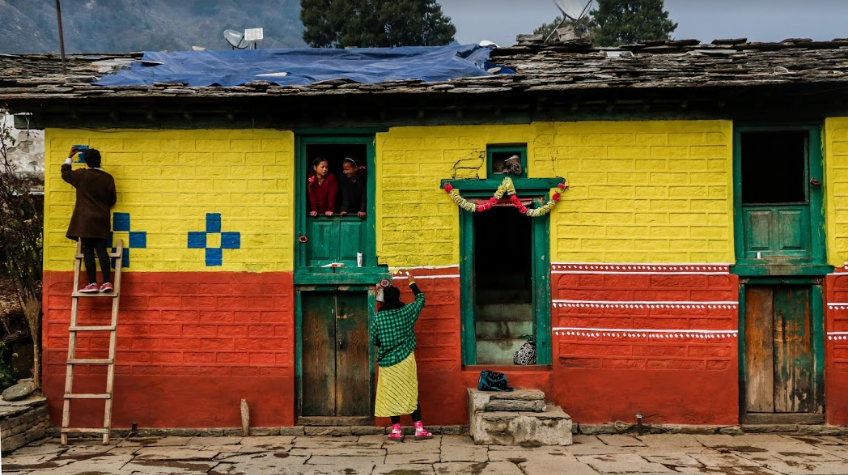 The month long project aimed at preservation of culture, bringing together the community, enhancing social health and well-being, showcasing local art and crafts, re-enforcement of social issues like menstrual hygiene and sanitation, amongst other things.

My favourite story in Khati is of a young girl named Hema. She was curious, intelligent, and more than anything, open to learning. Recently married, Hema had moved into her in-laws’ house on one condition - they will let her work. She was proficient at stitching and knew how to operate a computer, which led her to open a small tailoring shop in the confines of her house. The advantage of this was twofold - a young girl claiming her independence and sense of identity, while single-handedly solving the village’s problem of the dearth of any kind of clothing supplies in the vicinity. In a gesture honouring her story and determination, we painted a sewing machine on the wall of her house, captioning it ‘Hema Tailoring Shop’. 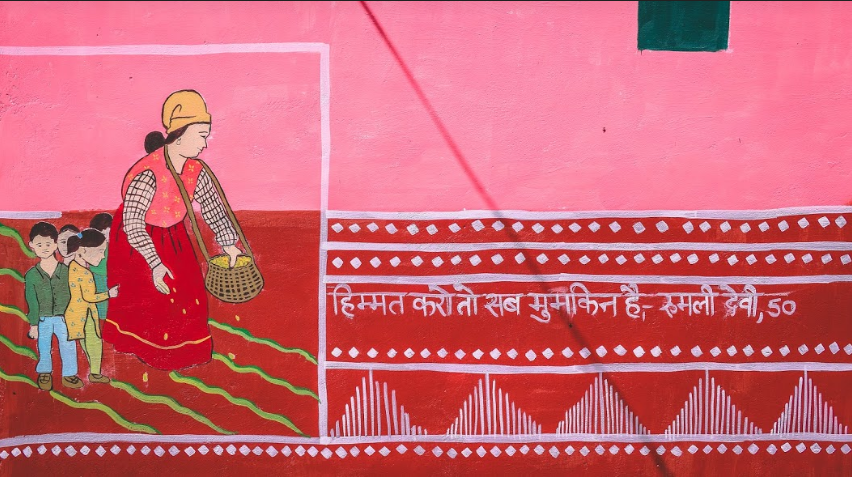 Poornima Sukumar, a well-known artist and muralist, spearheaded the project and chose the traditional ‘Aipan’ art from the region as the foundation of her design for each house. Days before we would start the base coat on a house, Poornima would brainstorm with each family to ensure that we incorporated their ideas and inputs into the mural. Describing her experience she shared, “If the whole trip's lesson can be summarised in a word, I would call it Value. Value of little & Value of much. Particularly because I felt the generosity when I gifted a bangle of mine to a 100 year old lady. Minutes later, she got up and brought me two bangles as a return gift from her collection.”

Many villagers during our interaction revealed that due to unemployment and seasonal nature of their jobs had not been able to save enough money to get there houses painted. A community art program that catered to painting each house helped even the vulnerable households benefit in order to see their house renovated in its appearance. 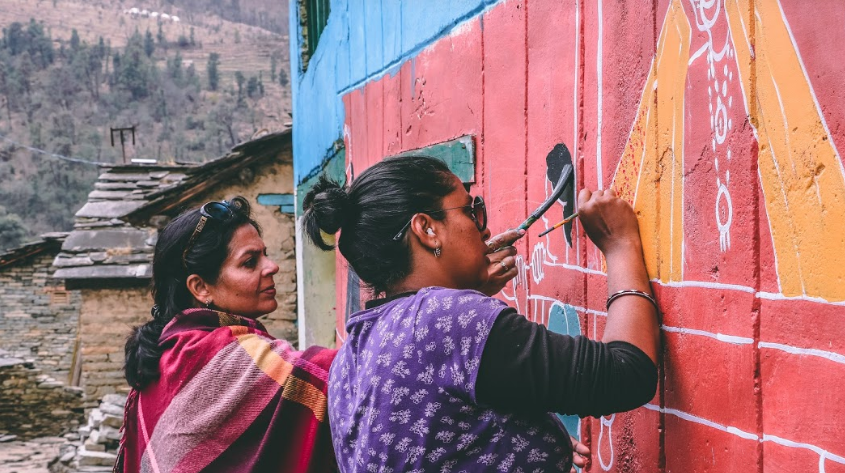 After a month of being in the mountains, as we return to civilization, with each honk, notification and call I am reminded of our friends on the gigantic mountains of Pindhari. And that someday, hopefully soon, it would be possible for us to just call them in an instant without thinking about the network or the connectivity. And when that happens, I am sure we would celebrate the impact of this Wise Wall Project. 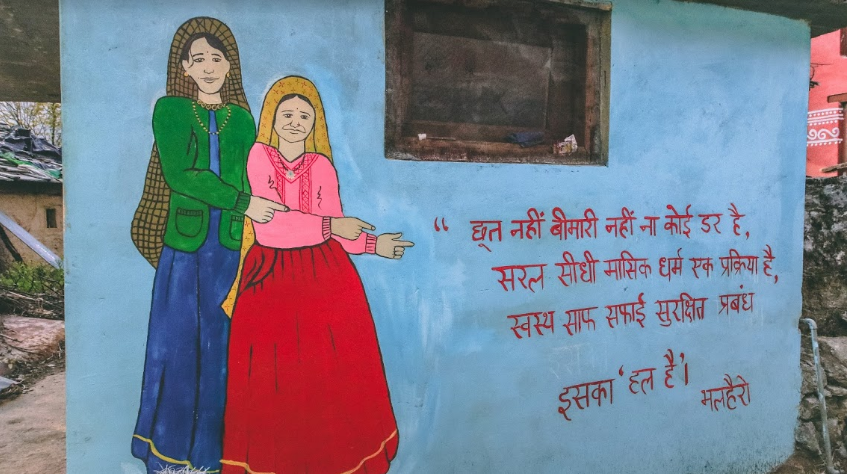