Experts Weigh In On The 'Adopt A Heritage' Project: 'Systemic Attack To Denigrate The Freedom Struggle'

Experts Weigh In On The Adopt A Heritage Project:'Systemic Attack To Denigrate The Freedom Struggle"

NEW DELHI: The government is under fire over the adoption row of the iconic Red Fort by the private entity Dalmia Bharat group under its ‘Adopt a Heritage’ project. Under attack by the members of the civil society, historians and opposition parties, the decision has not gone down too well with the public either.

“I am certain that it is a part of a systematic attack to denigrate the freedom struggle and the people associated with it. It is no surprise that October 2 is Swachh Bharat Day and no more just Mahatma Gandhi’s birth date”, said Sohail Hashmi, a well known historian who feels there is an extent of irresponsibility at the level of governance.

The Dalmia Group was chosen over InterGlobe Foundation, the parent company of IndiGo Airlines, and the GMR group, who had also expressed interest in adopting the ‘Laal Quila’ under the scheme where the company becomes a ‘Monument Mitra’. On April 24, 2018, the Group announced that it signed a Memorandum of Understanding under which it committed Rs. 25 crore over a five-year-period for the upkeep of the national treasure- the iconic Red Fort, stirring a storm amongst the experts and political parties. 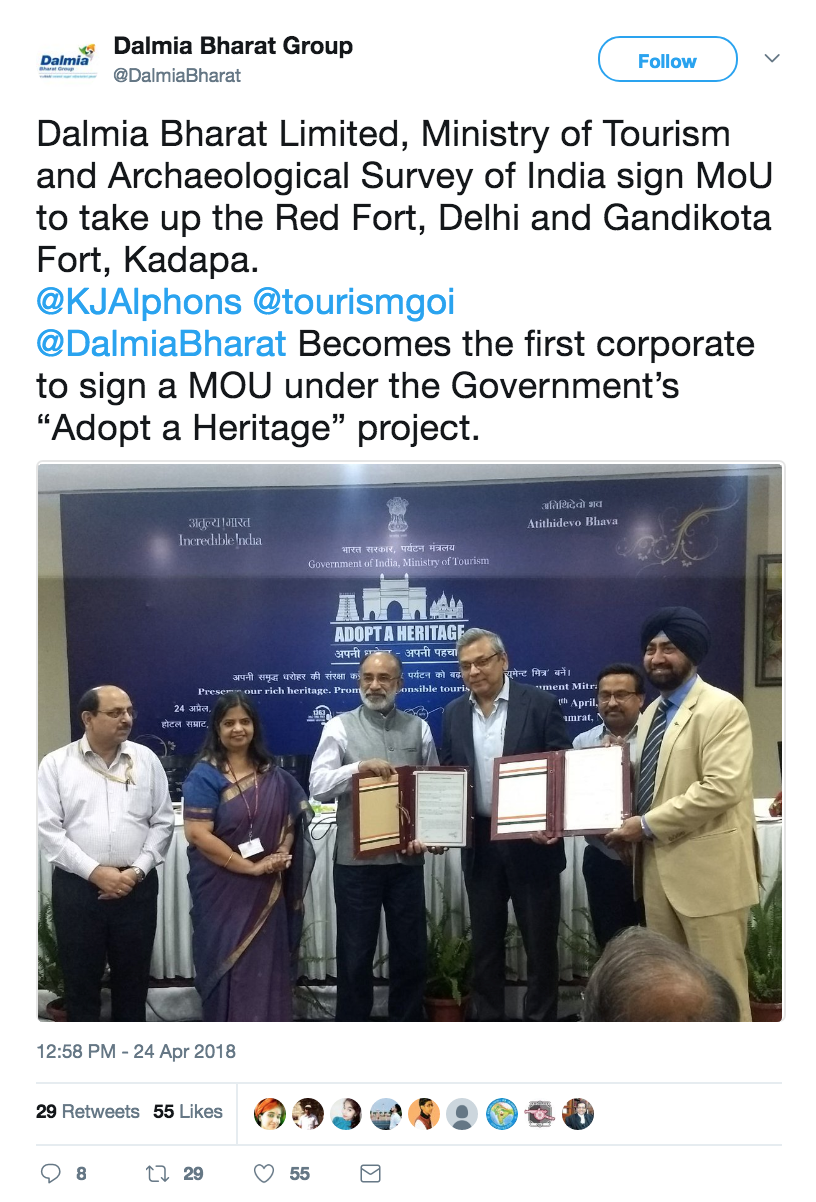 Hashmi further added, “Dalmia Group is functioning in accordance with their Corporate Social Responsibility which simply means that shedding away a meagre five crores each year for five years would be nothing in comparison to their turnovers of thousands of crores. In turn, what they are getting is much bigger- signages all over a monument of cultural, historical and undying importance”.

Talking to The Citizen, K J Alphons, Minister of State (Independent Charge) for Tourism feels that there is no profit-making in this scheme, nor does it allow partners, public or private, to touch the monuments. “The monument has not been ‘given away’ to any entity. The private company’s role is to create peripheral infrastructure like ensure cleanliness, provide wifi and other visitor friendly installments around the area. Archaeological Survey of India will continue to take care of the heritage that we have where the private entity is helping it with peripheral infrastructure. There is absolutely no question of renaming the monument” not addressing the question that followed about branding if not renaming”, Alphons added.

While the Red Fort is not the first to be handed over to ‘Monument Mitra’, the importance of the monument puts a question on the action by the Centre over its fading role in the conservation and preservation of National heritage.

Amar Farooqui, a Professor of History and a reputed historian told The Citizen, “There is no doubt that Red Fort is not just any other monument with the colonial history associated with it. Sadly, the government chose to give it away to a private ‘Monument Mitra’. Anybody who knows its special status will think- what kind of a message are we sending to the public with the monument going in the hands of the private company? In principle, when we do not know the credentials of these private groups with regard to their skills and expertise, how could we just give it away without this essential knowledge? Are we really lacking the resources to take care of our history?”

Discussing how this move by the Centre “ultimately reflects that there is a particular kind of attitude that the state has towards conservation”, Farooqui further added, “It is no more a responsibility for them but just a job that can be managed. I believe, the people of India trusted the government with this heritage and the government is betraying it. It is not for them to give it away to any private party.”

“ASI does have the manpower and the capability to take care of these monuments. Strangely, to my knowledge there has been an instance where a private organisation has further outsourced the work of museums to another entity, creating a chain of outsourcing. This is just one of the broader issues with it while the main question stays, what is the message that the government is sending out?”, expressed Farooqui.

Meanwhile, an official from ASI, who wished to stay anonymous said, “It is a policy matter and anyway falls out of the Delhi Circle”, divulging no more details on the issue.

The process of monument adoption begins with the interested entity selecting any of the numerous featured heritage sites according to the guidelines. The monuments are separated into three categories - Green, Blue and Orange - depending on tourist footfall and visibility. So far, the ministry has drafted 31 agencies as Monument Mitras for 95 monuments spread across India. Some of the monuments adopted include Mt. Stok Kangri in Ladakh, the Gaumukh trail in Uttarakhand, Dalmia Bharat Limited for Red Fort, and Gandikota Fort in Andhra Pradesh, as reported by The Times of India.

Not to much surprise, Gandikota Fort, a 14th Century heritage monument, located in the Kadapa district of the state has also been adopted recently by the Dalmia Bharat group on the same day as it signed the Red Fort deal with the Union ministries of tourism and culture and the Archaeological Survey of India, on April 9, 2018.

While some scholars call the move “sheer incompetence” of the current administration in understanding the importance of social responsibility towards history, others claim it is the “worst capitalist move” that could bring down the faith people have put in the government where outsourcing has taken a new tangent. It remains unclear as to how exactly the company plans to carry the processes of restoration, preservation and conservation of these monuments.

“The government, if it wanted to could have worked on a policy to create seperate tickets for compounds that are currently shut like Moti Masjid, Sheesh Mahal and others. That’s what Italy has done for the Leaning Tower of Pisa- separate tickets depending on area visited, climbing and even hours. With these funds more guards could be hired for the protection and in turn, employment could be generated keeping conversation going. There are a hundred other ways to manage, preserve and protect a monument of heritage if you want to”, Sohail Hashmi told The Citizen, describing an alternative approach the government could have adopted.

He also addressed the undergoings saying, “I am essentially arguing that if these monuments need to be given to corporates, there has to be a very clear policy. The bureaucrats are more concerned about their next appointment or if they were slow starters, then retirement. Archeology is not a glamorous department like the other departments”.

While the historians are thunderstruck by the government’s decision to hand over the 17th Century Mughal era monument, the politics around it is not at rest either.

Issuing a statement on the website, Polit Bureau of the Communist Party of India (Marxist) expressed opposition to the agreement: “The Dalmia group in its own press release has said that they will ‘have to own if for five years initially’ and the contract gives them the freedom to make the Dalmia brand prominently visible. It has the right to use its brand name on all kinds of publicity material to be displayed during events organized at the site and also on all signage. In fact, it will be allowed to proclaim in a prominently displayed sign that the Red Fort has been ‘adopted by Dalmia Bharat Limited’.”

Talking to The Citizen, Tapan Kumar Sen, Member of Parliament, Rajya Sabha and a member of CPI(M) said, “We have openly opposing it and have always done it in the past too. Private sector is not taking it for philanthropy. A heritage site will be exploited through all private business means where the government is passing on a share arrangement for their personal profit”. He further added, “It will be discussed when the session of the Parliament opens next”.

The party reminded the government that the Parliamentary Committee that went into the issue of handing over heritage sites to private entities had "decided against this unanimously and it must rescind its decision”.

Meanwhile a series of tweets also went on floor from the politicians, criticising the decision. 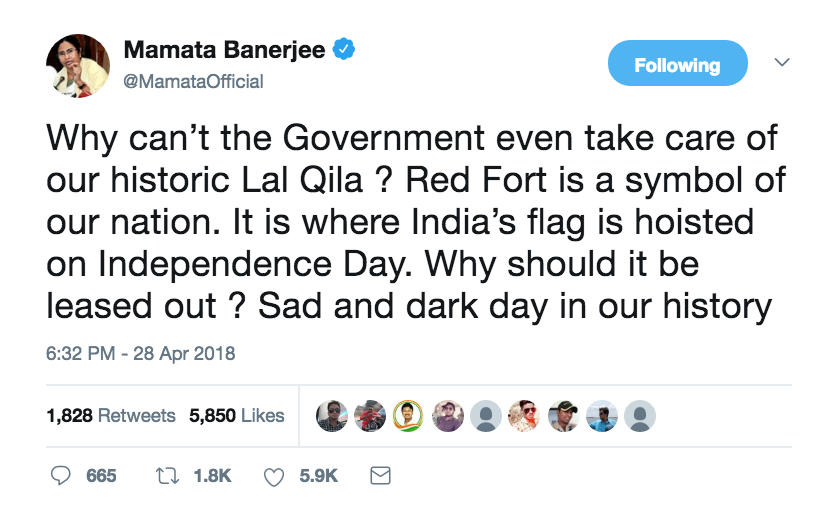 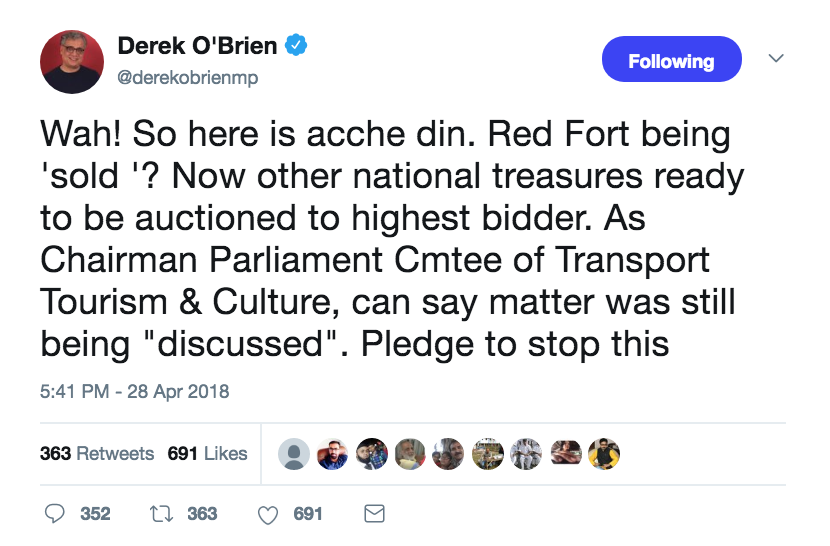 On April 29, 2018 Samajwadi Party Rajya Sabha member, Javed Ali Khan claimed to expose Dalmia Group of 540 crore rupees fraud that dates back to 2014 along with other allegations of serious nature including murder of his wife and absconding from the country.

Talking to the Citizen, Javed Ali Khan expressed, “These are not allegations that I am putting against the Dalmia Group but information that the public deserves to know about the kind of people who will manage our heritage, how sincere they are with their intentions”.

When asked about the recent adoption of Red Fort by the group, Khan said, “Nobody does it without a profit in mind. They are Private and Corporate houses and the government is blessing them with this big opportunity to brand themselves. Itne bhi dayaalu nahi hain yeh aaj ki tareekh mein. Sarkaar koi bhi zimma uthaane ke layak nahi hai. Khud haath khade kar rahi hai is zimme se. (They are not kind people. The government does not want to own up to anything. They are giving up on their responsibility themselves)”.

Discussing his next step, Khan called for “Political parties to take this issue up as our heritage is at stake. If others do not, I will make sure that this is a part of my party’s manifesto in the coming year and 2019”.