Ashok Mitra: 'From Poetry to Procession'

A True Marxist, An Intellectual And Also a Poet

Ashok Mitra, one of the most committed and honest Marxist intellectuals India has ever produced, is no more. He passed away of age-related complications in a Kolkata nursing home, his wife Gauri having passed away ten years ago. Mitra was ninety and almost all these years, he fought for what he believed in, not only through his political affiliations, his official designations and his teaching assignments but more significantly, his prolific gift of writing, arguing, establishing his arguments through his pen. His very famous columns in two national dailies and in Economic and Political Weekly were later published in the form of books.

Sankar Sen, an eminent intellectual in his own right, writes: “Mitra was a towering intellectual with a facile pen and sharp tongue. He had a felicitous style and many of us enjoyed his scintillating newspaper articles. His views, though on occasion acerbic, were clear and unequivocal and he pulled no punches.”

This writer was fortunate in making his acquaintance twice. Once, through the pages of the Economic and Political Weekly many years ago. He had clubbed several books on gender together for a review and my first ever book on gender was picked among them as the one he had liked. This was in the early Eighties when I was just on the threshold of my career as a journalist and author. The second time I was lucky to meet him in person in around 2000.. It was a grand function to celebrate the 75th anniversary of a noted publishing house and he was the chief guest. He spoke lucidly as usual. I pushed myself through his fans to meet him behind the stage at a five-star hotel. I wanted to touch his feet in respect but being the hard-core Marxist that he was, he refused. I introduced myself and I was amazed to learn that he knew my byline and also read some of my pieces in The Statesman. I was both flattered and embarrassed.His thorough groundedness in the Bengali ambience of intellectual snobbery really took my by surprise. For me, this meeting remains one of the most precious memories of my life as a journalist.

In his autobiography, The Prattler’s Tale translated from the original Bengali Apila Chapila, originally serialised in Bengali journal Desh, Mitra offers an interesting account of his journey from childhood in Dacca, then a sleepy district town in East Bengal, to the end of his formal academic career at the Institute of Social Studies at The Hague, Netherlands, under Professor Jan Tinbergen, one of the world’s foremost econometricians.

Few are aware that not only was Mitra equally fluent in both languages – Bengali, his mother tongue, and English the language he communicated in, but also that he began his journey as a poet. One of his notable books is called Kobita thekey Michiley which translates as “From Poetry to Procession” and is remembered by all who have read it. Before he became the finance minister of the state, Mitra also held the position of Chief Economic Advisor to the Central government from 1970 to 1972 and later became the Chairman of the Agricultural Prices Commission. Apart from his academic work, of which The Share of wages in National Income and Terms of Trade and Class Relations were two outstanding examples, he was a columnist at various times for Now, Economic and Political Weekly, and The Telegraph. He also edited a Bengali magazine till his last days.

Mitra also worked for the World Bank and was chairman of the Parliament's Standing Committee on Industry and Commerce after his nomination to the Rajya Sabha in mid-1990s. Though he was not active in politics after quitting the government, Mitra was an influential social and political commentator, writing newspaper columns on a variety of domestic and global political matters. Not that all of them were simple to understand, but they shed light on his prolific writing habits, his infinite energy and his determination to spread the ideology he believed in – Marxism. He won the Sahitya Academy Award for his contribution to Bengali literature. Besides authoring around two dozen titles, he also authored two volumes on the art history of India in Bengali.

In August 2013, Mitra, though he was formerly a CPM MP, lashed out at the party leadership for “patronising US capitalists and the foreign business lobby. He was addressing a public meeting in the Cossipore-Baranagar area in North Kolkata where he alleged that a section of party leaders and workers had been deviating themselves from Marxist ideas and ideologies and were selling themselves to the USA and the British lobby for their own interests. Ironically, the pubic meeting had been organized by the local CPM zonal committee in remembrance of the mass killing of Naxalites in August 1976 when Siddhartha Sankar Ray was Chief Minister of West Bengal. He confessed that he felt ashamed of having been in a CPM-led government and party MP. He had resigned from the ministership during the end 1980s following a difference of opinion with then Chief Minister Jyoti Basu and the party leadership.

Despite being a Marxist economist, Mitra was critical of the Communist Party of India (Marxist) on several occasions. After the police firing in East Midnapore district’s Nandigram on March 14, 2007, where at least 14 persons were killed, he lashed out at the Buddhdeb Bhattacharjee government. “If I do not speak out now, my conscience will never pardon me,” Mitra had said. In a fitting tribute, former Governor of West Bengal Gopal Krishna Gandhi writes, “Ashokbabu, traversed fields that included Michelangelo, Antonio Gramsci, the lyrics of the Tagore music that was being played by an instrumental choir, Victoria Ocampo and, in answer to a question on whether crime thrillers still fascinated him, a short dissertation on Earl Stanley Gardner's oeuvre.”

Gandhi adds that “in his compact little study which had four walls lined with books from floor level to almost the ceiling showed age and handling. More importantly, they bespoke belonging. They sat on those shelves, with a few small framed photographs of family and friends - and one of Lenin.

Once, Pranab Mukherjee, then the finance minister in the Union cabinet in the early 1980s, had accused Mitra of plagiarism referring to a speech he had written for Indira Gamdhi when she was PM. But Mitra was not one to take this accusation lying down. He filed a defamation suit against Mukherjee and withdrew the suit after Mukherjee apologised to Mitra in writing. The entire episode was reported widely in the media at that time. Mitra had very cordial relations with Amartya Sen and was not only happy when Sen was bestowed the Nobel Prize for Economics but also lamented that it was an award that was long overdue.

In 1993, Mitra was invited to deliver the main address at a discussion on the administrative changed in the Panchayat Raj in West Bengal. Present on the occasion was then-Governor or Punjab the late Nirmal Mukerji and MP Debarata Bandopadhyay. Mitra was requested to deliver his speech in English because he was told that the Governor was not very comfortable in understanding Bengali. Mitra promptly retorted, “He still uses Mukherjee as his family name so I will deliver the address in Bengali.” In the entire speech that lasted 90 minutes he did not use a single English word! That is what Ashok Mitra was like. We will miss you Ashok Babu. 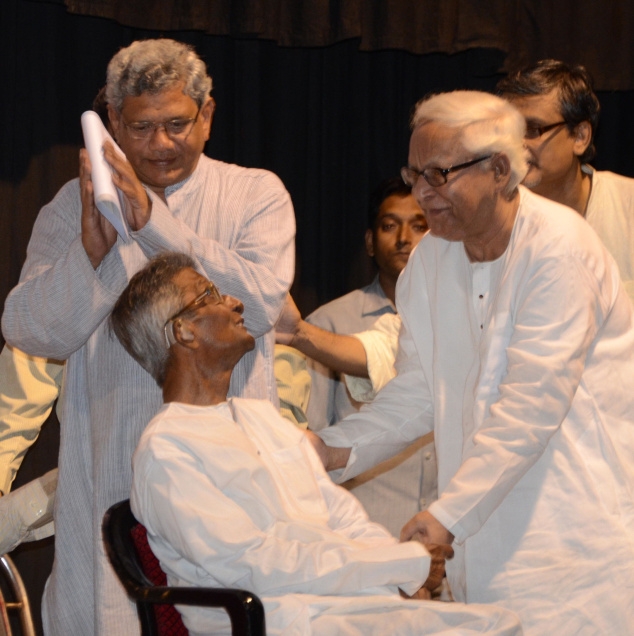