Every year during the month of Ramazan in Delhi, a rush ensues among the food lovers for iftaar food walks. All these food walks hover around Old Delhi areas of Matia Mahal, Chandini Chowk and some take place at Nizamuddin Basti. In my view over the years these food walks, conducted by several groups in Delhi, have become a tad touristy. The iftaar celebrations and the even the food offered during these walks are suitably tweaked to suit the taste of an international or uninitiated urban Indian tourist.

But for those who crave for authentic food and a real, not made up, ‘Ramazan atmosphere,’ we recommend a self-done food walk at Zakir Nagar, in South East Delhi. 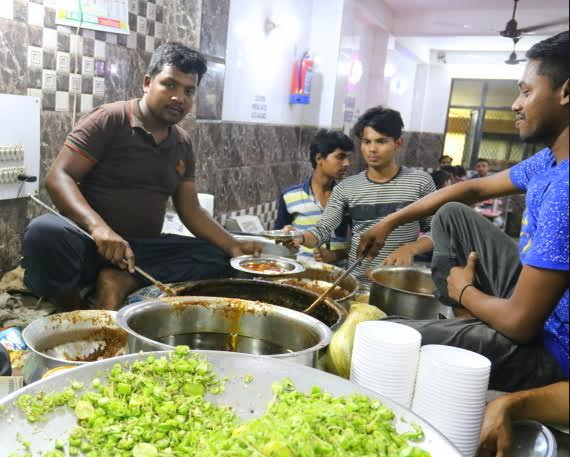 Nowadays, Zakir Nagar, a Muslim dominated colony close to Jamia Millia Islamia University, is in a grip of Ramazan celebrations. And food is a main ingredient of these celebrations. The thing is, whatever food is prepared here is, meant for the local consumption. It is not prepared with tourists in mind. That is the strength of a food walk here.

How to reach the venue

The best way to reach the place is to take the newly opened violet line of the Delhi Metro Train to reach Jamia metro station. Walk to the well-known Zakir Nagar dhallan, the entry point of Zakir Nagar main road (10 minutes) or take an e-rickshaw. 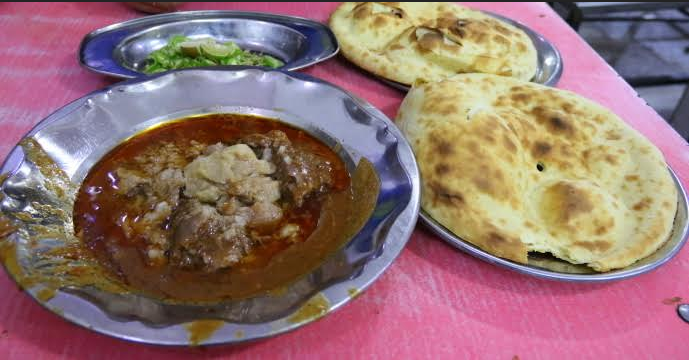 The evening I turned up at Zakir Nagar main road (where most of the action is), with a foodie friend, we did not spot any groups being led or tourists around. It was a scene much different from the Jama Masjid area, where tourists have to jostle for space with locals. Things felt much relaxed here. A rare curious person with a camera in hand, such as I, is welcomed by the locals with smiles. The food outlet owners were all happy to chat and the workers eager to be clicked. It was welcome change from the usually bored expressions and totally business like behaviour one encounters in Old Delhi food outlets. In Zakir Nagar there was a personal touch to everything. A couple of food outlet owners even refused to take money from me. The whole effect was that I was made to feel very welcome. All that made it a perfect food walk for me. 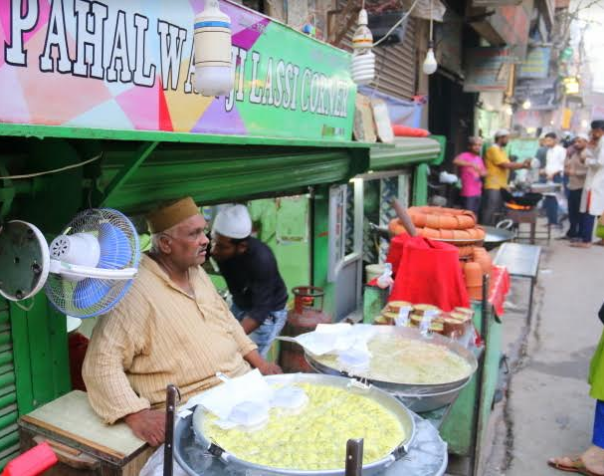 Having largely come up in the late 70’s and the 80’s. it is true that Zakir Nagar cannot boast of a rich heritage and lineage of the Old Delhi. By some accounts, the Old Delhi people somewhat look down upon the eateries of Zakir Nagar and consider them nothing more than upstarts. Well, it is true, in Zakir Nagar you will not come across eateries that claim to be dishing out food for nearly a century or more. But the eateries here have surely created an identity for themselves.

A few minutes past 7pm the main market suddenly donned an almost deserted look. A few minutes ago, stalls selling snacks such as vegetable pakoras, gujiya, kachori and jalebi were too busy. It was time to break one’s fast, followed by namaaz. After which the crowed came back steadily. 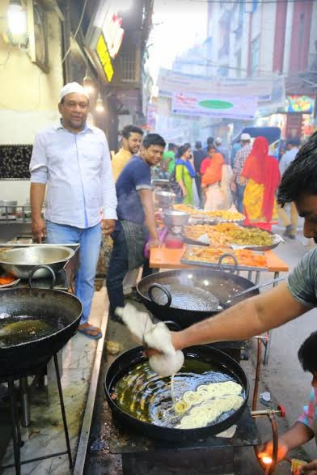 As is the norm we started the food walk with kebabs. No, before kebabs and to beat the heat, we tried a speciality that is available here only during Ramzaan. That is Khajoor shake. It was smooth and delicious. Then came the kebabs.

Talib ke Kebabs were strongly recommended to us. As it turned out, Talib kebabs is a ‘hole in the wall shop’ that was easy to miss. A couple of laminated published articles on Talib Kebabs pinned above the shop were the only decorations. But the seekh kebabs and tikkas (made of buff) proved memorable. The kebabs were juice, spicy and hot. The tikkas had perfect texture. Zahid, the present owner of Talib, says the shop is named after his elder brother. The secret of their kebabs according to him is the homemade spices they use and benevolence of Allah. 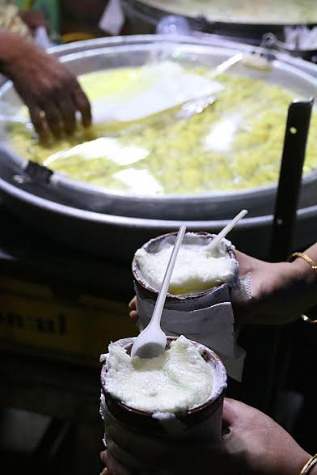 Mohammad Rias sets up Sewaiyan and khajala shop only during Ramzan days. His shop displayed a huge variety of sewaiyan. He prepares some stuff himself and rest he gets from Moradabad.

Our next stop was the best-known restaurant here, that goes by the name Purani Dilli in the main market. It’s a proper airconditioned sit-down restaurant. Their ‘stand out’ preparation is Haleem. I found it to be the best in Delhi. The other preparations of the restaurant are all excellent including the mutton Nihari. They do not use buff in their preparations and restrict themselves to Mutton and Chicken. The restaurant proudly displays a host of published articles about it, as one enters. 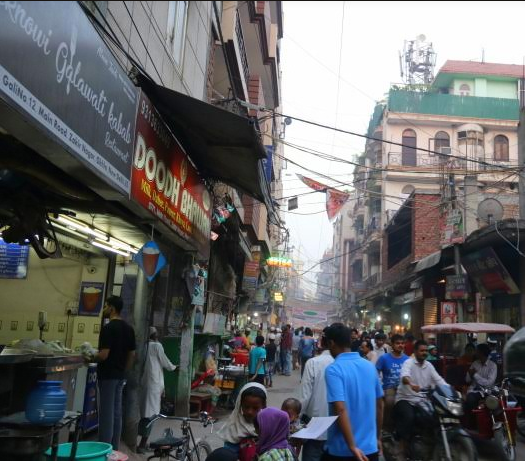 The favourite of the locals is the Javed Nihari, a few meters ahead of Purani Dilli restaurant. It too is a sit-down restaurant, though without AC and has a rundown look. But the food they serve is the real deal. It was a busy scene. Nalli and Maghaz Nihari was being dished out from a big degh. On the side was a busy tandoor bringing out khamiri rotis to accompany your Nihari. There was an offer of special Kheer too but decided to forego it for this time.

The Nihari was topped with green coriander leaves, crisp onion strips and shredded ginger pieces. I squeezed a lime wedge over it and then dipped a piece of khamiri roti into it. Total bliss. The meat cooked slowly over hours was very tender. The bone marrow (we had ordered Nalli Nihari) added to the taste. 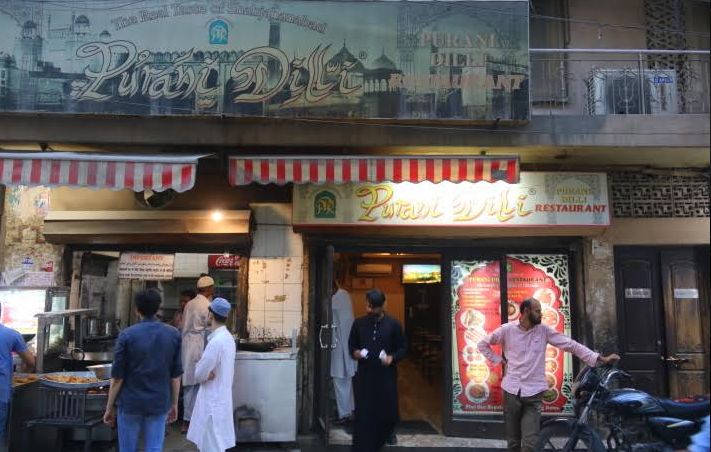 We finished our sojourn with a helping of the famous Pehlwan lassi given to us in an earthen kulhad. It was delightfully thick, chilled and tasted heavenly in the heat of May. Pehlwanji was himself keeping an eye on the proceedings. Before we left we got some Moradabadi Biryani packed from Alam Biryani. It turned out to be another good decision.

I felt that the restaurant and food outlet owners of Zakir Nagar have a desire to find their identity in the lineage of Old Delhi. I think they no longer need it. Wazir Beg, owner of Javed Nihari says that they are originally from Bada (Kasabpura) near Eidgah, Rani Jhansi road. He has put this information on his display board. 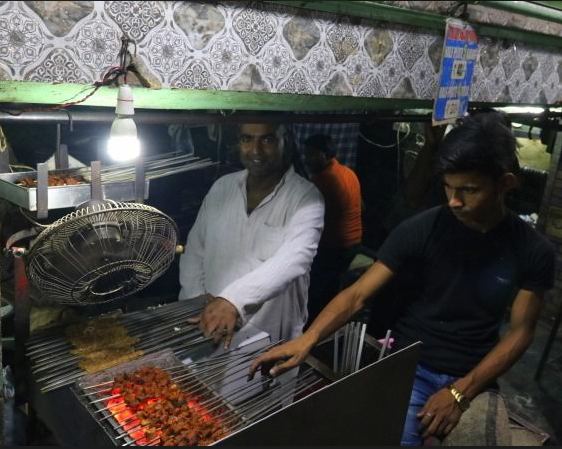 Bada, is well-known among the connoisseur of Mughalia food in Delhi as a place that has some great cooks. The Talib kebab owner Zahid, too traces his lineage to a kebabchi from Matia Mahal. And the best restaurant here is also named Purani Dilli. But I must say that whatever we tried here was at par or at times exceled the taste you get in Old Delhi, and it was definitely authentic. Also, I must add, the food on offer here was far less expensive than what we get at the more famous outlets in Old Delhi. 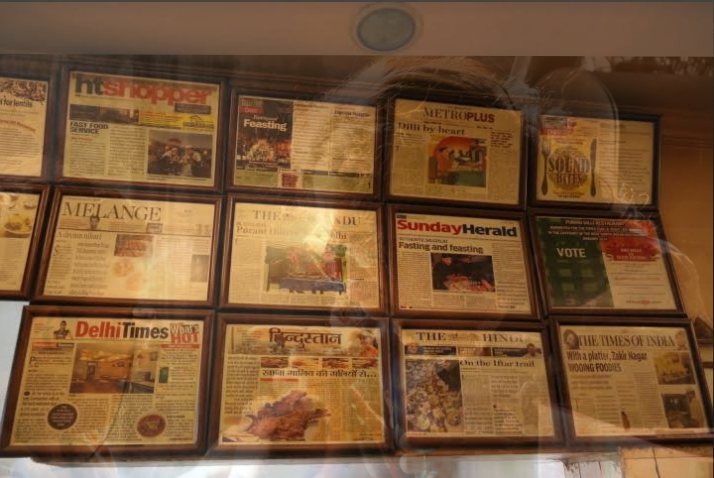