Food and magic woven in a fine fairy tale

A dimly lit flight of stairs inside a dilapidated mansion that has seen better days shows a boy of 12 or 13, slowly clamber up these stairs everyday, carrying food he has cooked for his maternal uncle whose only job in life is to laze around, drink, or bash up his nephew who has been thrown out of a mainstream school because he has marginal IQ. Does not sound like a fairy tale, does it? Butt believe me, Rainbow Jelly is very much a modern day fairy tale. Directed by ace illustrator, animation artist and graphic designer Soukarya Ghosal, it is a modern day fairy tale that uses surrealism to weave a beautiful story of how food magically changes the life of an abused, neglected and tortured orphan who is also heir to a secret treasure.

Ghosal presents an original perspective on the links between and among food, fantasy and the 13-year-old boy Ghoton who has marginal IQ and has been thrown out of a mainstream school. The other USP of this lovely Bengali film is that Mahabrato Basu, 12, who makes his debut as Ghoton, has himself been fighting neurological problems since his birth. Though he went to a school for special children when the director spotted him for the role of Ghoton, he now goes to a mainstream school. So, this posed another big challenge for the director whose first film Pendulum was a flop show, his second, a television film Load-Shedding, was a reasonable success that gave him the gumption to make his third – Rainbow Jelly.

Ghoton lives with his maternal uncle nicknamed Gondariya by the entire neighbourhood (short form of gondar which means rhinoceros with a thick skin) behind his back, is waiting to find the password that holds the secret to Ghoton’s inheritance his scientist father has hidden inside a huge, antique robot. “I decided to make Rainbow Jelly because I wanted to make a film with a universal appeal. Bengalis strongly identify with food and fairy tales or fantasy. None can address a fairy tale so effortlessly and candidly like a Bengali does, be it Leela Majumdar or Satyajit Ray. I am a fan of both and I thought of trying to merge Bengali’s love for food with fantasy for the first time. I hope Bengalis savour it,” says the director.

Ghoton goes about his chores – marketing, cooking, serving food often to be beaten if it has turned stale or got burnt, or an egg cracked during cooking and though he hates the uncle, he has no choice. Two other friends are the corner tea shop owner Anadi who loves to listen to old Hindi songs on his transistor. He likes the little boy. The other friend was little Poppy, a sweet little girl, his next door neighbour whose parents leave her with an ayah to attend to their hi-fi jobs.

Food and its associate philosophies enter the scene with the entry of a surrealistic character in the form of a fairy godmother called Pori Pishi (fairy aunt) who promises that over seven days, she will cook seven different dishes with seven different flavours and colours that will not only change the mindset of Gondariya but will also save Ghoton’s life who the uncle has planned to cut short when he reaches his 18th birthday and will directly inherit the hidden treasure. 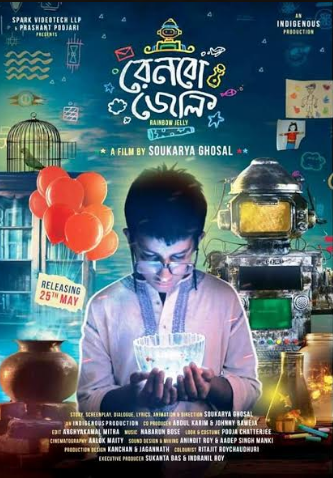 From this point on, the film begins a journey into a surrealistic world that maps the relationship between Ghoton and Pari Pishi who can weave magic through the food dishes she cooks over seven days that must be served to Gondariya by Ghoton who must bring back a teaspoonful of the food. The film spans a little more than the seven days and each food has its own distinct colour, flavour and taste and is supposed to influence the eater differently. Vacillating between darkness and brightness, the staircase often filled with the light from the bowl of food Ghoton carries in his hand for his uncle, the film sheds light on other areas of life apart from its focus on the magic of food in all its splendour.

Cinematographer Alok Maity makes optimum creative use of the surrealistic elements of the story. The shots of Ghoton bringing the final bowl of rainbow jelly to his uncle on the last day lit from below is truly magical which is enriched with the relief of the flying planes above, juxtaposed against the neighbourhood boys who make fun of Ghoton and the tea stall owner who comes to his defence whenever the moneylender zooms in.

The fair Godmother with her weird costume, funny look and commanding ways adds to the magic of the film. The top shots of the terrace give us a perspective of the loneliness of the tortured boy Ghoton who finds himself in a no-exit situation but is totally helpless.

“I was reading up on Ayurveda a lot. That has been part of the inspiration for my story,” says Soukarya. Ayurveda states “don’t make medicine your food, make food your medicine.” The basic taste theory of Ayurveda clearly states how the human mind along with health changes with changes in food. We have seven tastes like – sweet, sour, salty, spicy, pungent, astringent and bitter. Medical science went on to link it to hormones. Besides, Ayurveda also goes on to state that our seven Chakras of consciousness are of seven colours which have a deep connection with seven tastes in food. That is why I have combined seven colours with seven tastes. Seven is a magic number according to Indian Mythology. We have seven tastes, seven colours, seven notes in music, seven planes of consciousness etc”

The small sub-plot of the little girl Poppy, who Ghoton is very fond of, sheds light on how even when parents of little kids are alive, their career ambitions turn them into fake parents who kiss their kids over their cell-phones and give staccato directions to the ayah who is paid to look after them. Their aspirations have turned them into human robots not very different from the antique robot in Ghoton’s home. 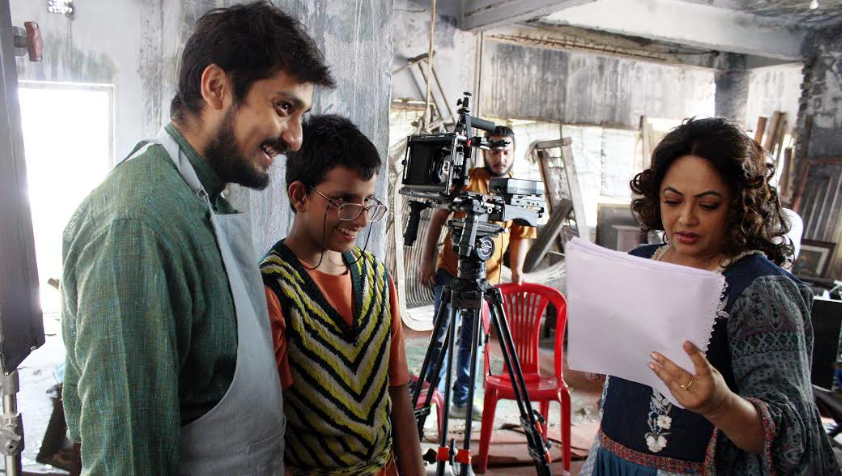 Poppy is all alone and sad when she has fever but her mom has little time for her. Her tiny meetings with Ghoton who she talks to from her terrace as he draws his mother’s picture on the floor of his terrace are emotionally moving. One is also introduced to a modern day “kabuliwalla” who zooms in on his two-wheeler now and then to chase Gondariya for the loans he has taken but ultimately helps Ghoton to retrieve his inheritance. Anadi, the tea-shop owner, offers a small slice of humanity and empathy to Ghoton who keeps pining for a mother he hardly remembers. There is a touching top-shot showing Ghoton curling himself up on a huge sketch of his mother he has drawn on the terrace of his home. Rainbow Jelly is both a character-driven story as well as an incident-driven one, the two bonding together to create a different kind of cinematic magic that is not preachy at all but carries messages so subtly that you almost miss them if you are not careful.

There are visual metaphors that are also presented in modernised form. For instance, the saying that if we make a wish when we see a shooting star that comes true is changed to catchig sight of a flying plane and making a wish before it flies away. So, Ghoton is often seen looking skywards when he hears the sounds of an airplane in flight. The most outstanding quality of the film is Mahabrato who puts in a sparkling performance as the slightly autistic, partly funny and greatly scared of Gondariya bumping him off on his 18th birthday. Gondariya’s is a very interesting character with a distinct lisp who is made fun of as he cannot pronounce “t” and bumbles over his guesses on the password.

Rainbow Jelly takes us back to a childhood filled with memories of the animation film Cinderella which also had magic in it and we saw the beautiful Cinderella rising in every small bubble that rises from the floor she is sweeping under the eagle eye of the step mother and two step sisters. Keep it up, Soukarya. You can make it happen!