Indelible Legacy of an Iconic Painter

A tribute to M.F.Husain on the master's 7th death anniversary

It’s one of the most shameful incidents in country's history as its eminent son, seized by an agonizing fear, had to renounce his Indian citizenship and accept rarely given Qatari citizenship. “I am a part of India's 5,000-year-old culture and I am so fortunate to be born in India”, said India's best known 'art maestro' Maqbool Fida Husain, popularly known as M F Husain. Like so many others, India's Pablo Picasso didn’t leave the country for personal success or professional accomplishment. The versatile artist who was also into filmmaking and photography was hounded and targeted by the new generation of Indian Hindus for apparently insulting their faith. Husain left the country in 2005 only not to return. It earned the country a badge of philistine state. 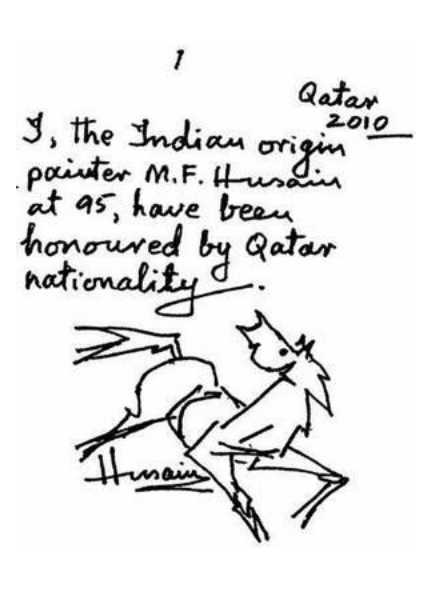 As democracy’s definitive deciders, we were to denounce the Hindutva hate campaigns against the painter, reject those who indulged in it and call out those who were behind this. Being a citizen implies rights and responsibilities, to question things, also to refuse to swallow whatever we are told - conscientious citizenship is a key to developing a country's identity and civic awareness.

But, what did we do? We just let it happen to one of the pioneers of modern art in India. We became anesthetized to distinctions between artistry and inflamed religious passions. The problem was not just the Hindu fundamentalists groups that fueled hatred but people like us for whom fact and fiction are but meaningless abstractions. For a society, that is the greater danger. Husain was victim of such danger - victim of cultural policing – victim of mean recontextualisation of India.

According to noted journalist and former editor N. Ram, “I know no one more genuinely and deeply committed to the composite, multi-religious, and secular values of Indian civilisation than M. F. Husain”. A resident of Dubai since 2006, the nation's celebrated painter of global repute died after a heart attack this day in 2011 in London. He was 96.

In 2008 Delhi HC quashed obscenity case against MF Husain who was forced to go into exile after his painting of Mother India as a nude woman. Husain was accused of hurting religious sentiments. “"We have been called as the land of Kama Sutra then why is it that in this land we shy away from its very name? Beauty lies in the eyes of the beholder and so does obscenity," Justice Sanjay Kishan Kaul observed. The epilogue of his judgment reads ‘A liberal tolerance of a different point of view causes no damage. It means only a greater self restraint. Diversity in expression of views whether in writings, paintings or visual media encourages debate. A debate should never be shut out. 'I am right' does not necessarily imply 'You are wrong'. Our culture breeds tolerance- both in thought and in actions…….. A painter at 90 deserves to be in his home ' painting his canvass!’

Later, Supreme Court also refused to initiate criminal proceedings against him for supposedly hurting public sentiments through some of his paintings, labeled obscene.

Matter-of-factly, we all have collectively failed him. We failed to honour renowned artist’s yearning to return to India. His wish- “Marne se pehle ek baar apne watan ki mitti chhoone zaroor aaunga... (Before I die, I shall definitely come once to touch the soil of my beloved country)” - remained unfulfilled.

As the white pyjama-kurta clad barefoot artist with an unkempt beard was often seen at India International Centre (IIC), Delhi, one wondered how could he remain so cheerful and charismatic despite receiving death threats and multiple lawsuits from religious hardliners.

The death anniversary of the legendary painter reminds me an unfortunate incident at IIC in 2007 when prints of the artist’s works were on display at its art gallery. Many IIC staff members still shudder at the thought of the threats received from Hindu extremist groups during the 10-day show. Strangely, the callers, who rang up from different states, were well aware of the layout of the art gallery and the exact location of the exhibits, to the extent they knew which print was hanging from which wall. IIC officials’ earnest efforts to reason with the fanatics proved futile. A Delhi Police team and large number of IIC staff and CCTV cameras specially installed for the purpose were in place to prevent any surreptitious attempt to vandalise the exhibition. But, despite all the precautionary measures, a few activists managed to sneak into the Art Gallery on the concluding day and succeeded damaging partly a print. They started throwing pamphlets while chanting loudly communally sensitive ditties. This not only left the viewers present at the gallery shocked but also besmirched the atmosphere of the centre.

At one stage, things came to such a pass that IIC administration had considered scrapping the show midway, fearing damage to property and harm to staff. But, it reconsidered after recognizing that backing out would not only tarnish the image of the Centre but also bolster the disruptive efforts of Hindu extremist groups. Not just IIC, art galleries across India planning or hosting Husain exhibition were similarly targeted by such groups.

The Husain exhibition, part of regular art shows is central to the ethos of IIC as the institution is mandated to undertake, organise and facilitate promotion of different cultural patterns of the world. The idea of such a Centre was conceived in 1958 when Dr S Radhakrishnan, then Vice President of India and Mr. John D Rockefeller III discussed setting up a centre for “quickening and deepening of true and thoughtful understanding between peoples of Nations”. Pandit Jawaharlal Nehru, the then Prime Minister of India, helped in selecting the site of the Centre near Lodi Gardens. But even such a background could not protect the premier institution with the global identity from the wrath of fanatics.

Remembering the incident as vividly now as that day, I find merit in what a French religious philosopher Blaise Pascal once said –"Men never do evil so completely and cheerfully as when they do it from religious conviction."

Hate-mongers have been successful as the nonagenarian artist was forced to go into a self-imposed exile, but remained hugely unsuccessful to destroy even remotely the Husain legacy. Art never dies.

The treatment meted out to one the most treasured artists of this country will neither be forgotten nor forgiven by all defenders of the freedom of expression. Ironically, while the hate-mongers considered themselves as ‘devout Hindu’, the iconic painter considered himself as ‘devout human being' instead of ‘devout Muslim'.

That said, such so-called devout Hindus, devoid of cultural nuances, and holding scant regard for artistic expression should have been dealt with sternly as they ushered in hardening a national culture that already has been on its way to extremes of crudity – a prescription perhaps for removing the badge of philistine state.