It is rare to find a feature film that plays out a fine harmony between and among form, content, aesthetics, acting and technique that may not have been designed to appeal to a mass audience but manages to haunt the viewer enough to carry the film along when the film is over and haunt one long after one walks out of the theatre.

Shonar Pahar (Golden Mountain) is one such film. The balancing between and among four or five characters spanning three generations of social and filial evolution comes across with rich emotional bearings that tug at your heart-strings but does not make you weep.

Upama (Tanuja) is a seventy-year-old widow who lives alone with a maid in her sprawling old house that has seen better days but will not have her adult son Shoumya (Jisshu Sengupta) and his wife (Arunima Ghosh) live with her. She is a very difficult old woman, cantankerous, temperamental and proud, once a librarian who lost her husband and was left to bring up her little son all by herself.

Into this lonely sky, her son’s childhood friend Rajdeep (Parambrato Chatterjee), who discovers this ‘aunty’ by accident, brings in an eight-year-old orphan Biltu (Sreejato Banerjee) to relieve her of her lonely hours. “He will stay with you the whole day and I will pick him up in the evenings,” he tells her. She very reluctantly, accepts the boy who becomes a close friend. 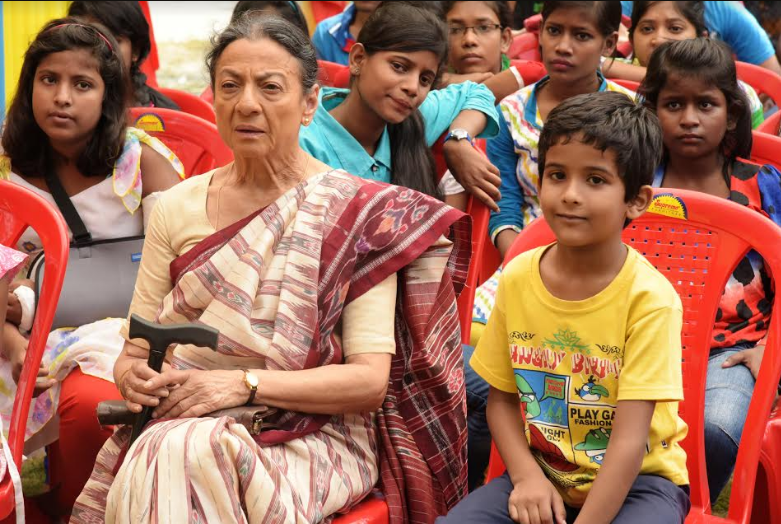 Biltu, an orphan, speaks with a stress on the “S” that reflects his background but is worldly wise. The NGO he lives in, run by Rajdeep, takes good care of orphans. The first days are tough because Upama cannot stand the noise he makes and the trouble he creates with his boyish pranks. The maid does not like him either because he begins to appropriate her television serials with his passion for cartoon channels but slowly, the differences disappear.

“Does your mobile have games?” asks little Biltu of the seventy-year-old who he insists on addressing as Uma instead of granny. “Upama is tough to pronounce or remember so I have shortened it to Uma,” he says quite matter-of-factly to his mentor Rajdeep.

Slowly, the old woman and the little boy grow close – enjoying ice-cream cones, having lunch at the Marriott where neither of them have ever been, wandering off to drives together as Biltu has his horse rides, trying to learn to drive at Biltu’s insistence that ends in disaster and the shocked Shoumya rushes in to take care of things and expenses.

Biltu is filled with shocking one-liners. “Discuss with me before you take important decisions,” Biltu tells her once, after they have grown close. “Whose picture is this man’s with huge breasts?” he asks her once, as he removes the picture of some family guru from Upama’s wall and replaces it with an old photograph of a young Uma and her small son. 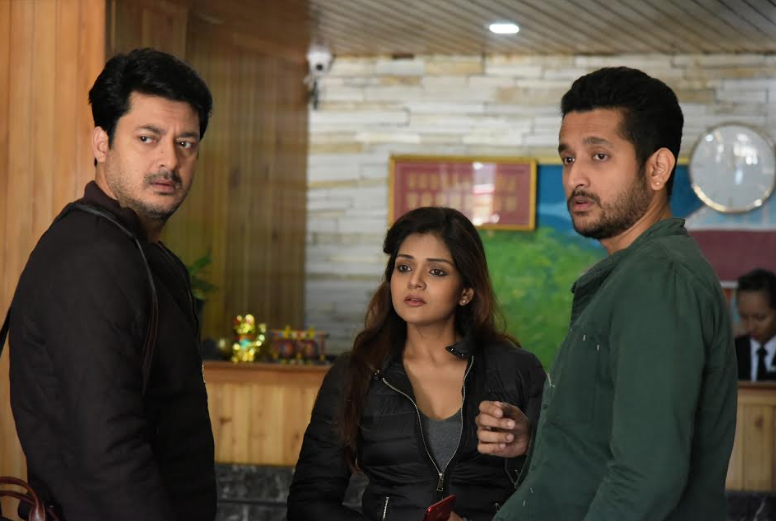 “One should put up pictures of one’s near and dear ones in one’s home, isn’t it?” he asks, not waiting for her response but stirring in her feelings she was probably not aware of. When Upama’s maid smacks him, he says, “Beating me is against the rules. Don’t you know I am unwell?” At the hotel in Sikkim, Biltu makes a call to Rajdeep at the reception and later, coolly tells the manager to collect the payment from Rajdeep when he arrives!

The little boy drives the old woman to finish the story she left incomplete, about the Golden Mountain she wrote when her son was small while the little Shoumya drew sketches of objects he wished for in the same notebook and knew that his young, widowed mother could not afford. But abracadabra, the objects he drew became real and lay on his table beside his sketch book while the page on which he had made the drawing had gone!

Till one fine morning, his drawing of a bicycle failed to come to life. The magic had vanished and the little Shoumya, who understood that his mother could not afford a real cycle, brought a little toy one himself drawing the mother and son closer.

Flashbacks to a young Upama (Gargi Roy Choudhury) and the small Shaumya are etched out beautifully in slightly faded monochrome on tracks stripped of dialogue allowing the expressions, the body language, the movements and the frames to weave their own dialogue. Flashing forward into the present, one is witness to the slow but sure steps that fragment the small family once Shoumya gets married and Upama cannot stand the well-meaning, kind and ready-to-mend-fences daughter-in-law. For once, we are kept away from the sad story of cruel children who do not look after their aged parents.

Parambrata presents the completely different perceptions on life by the old and the young. At one point, Uma says, “When children grow up, they do not go away, they just get lost,” a telling comment on the bitterness born of a lonely life in old age. “We were the closest of friends once,” admits Shoumya to Rajdeep, “I do not know what happened.”

There is a touching scene when Shoumya discovers the notebook in which his mother wrote stories for him and he drew the sketches. He closes the book and kisses the cover softly. The other moving touch is when Biltu asks Uma to recite the poem she writes in her story, it is Shoumya who begins to recite it from behind and walks up to ask his mother, his voice choked in tears, why did she have to recite the poem to Biltu when it belonged only to him and to her? Why did Biltu have to come to watch the golden mountain when she had promised Shoumya that they would watch it together?

The music is low key with strains of a Tagore song here and there and some music at the annual function of NGO that Uma and Biltu attend where Uma meets an old friend (Soumitra Chatterjee) and the uninhibited Biltu asks her whether this old man was once her boyfriend!

The only thumbs down one is forced to give to Shonar Pahar is the segment with Soumitra Chatterjee who stands out like a black spot on a beautiful portrait. The character just does not belong. This appears starker when placed against Uma’s maid who decides to visit her little grandson when Uma and Biltu are planning their secret trip to Gangtok; or, the taxi driver who becomes a ‘regular’ in driving the new ‘friends’ across the city; or, the police inspector who takes Shoumya to the Boodi Ghar (Room for Old People) to show him how the Kolkata Police is forced to house old parents left behind by their grown children in a train, or a bus stop, or a park, never to fetch them back.

Shubhankar Bhar’s cinematography is outstanding in every sense – capturing the nooks and corners and old walls with old pictures in Uma’s home, switching over to the park where Uma and Biltu go on an outing, to the function in the school, to that scene where Uma asks the driver to stop the car outside the complex where her son lives with his wife, to the clinical white walls of the hospital, right till that bright golden peak of Kanchenjungha they finally get to watch together. The editing does seem to jar at places but rarely.

Niranjan Bhattacharya’s art direction is a slice out of real life and does not look like created sets. But the cake and the frosting belong entirely to the actors, including Tanuja who makes a comeback without dubbing her lines in Bengali cinema almost after four decades. Jisshu Sengupta, Arunima Ghosh and Parambrato are very good but this is no surprise. The surprise package is Sreejato Mukherjee who packs a lot of punch in his entirely uninhibited and spontaneous performance.

Parambrat Chattopadhyay who is successfully striding across Bengali cinema, the cinema of Bangladesh and Bollywood at the same time as an actor, has written the story, script and dialogue of Shonar Pahar and also played a pivotal role in the film. But his significant contribution lies in the way he has directed the film that transcends the time-space-relationship paradigm to step into a world not easily perceived by us.

One is forced not to take sides or be judgemental about either the old mother or her adult son because, seen from their respective points of view, they are perhaps right in their way of thinking. This decimation of the relationship perhaps needed the little Biltu to create a reunion of sorts with a ‘clandestine’ trip to Gangtok to see the Golden Mountain Uma and Shoumya had promised to watch together long ago. The ‘twist’ in the end is another intrusion that the film could have done well without.

Shonar Pahar means “The Golden Mountain.” Does this golden mountain exist in real life? Or, is it an Utopian fantasy woven together as a dream of wish-fulfilment by a mother and her son? Yes, it does exist in real life and is also a Utopian wish-fulfilment for a mother and her son who had forgotten what it was to have loved and how that love got lost within the mess that their lives had become!

This has no links with the Paro-Devdas-Chandramukhi story. This is an unique, triangular love story between and among a 70-year-old widow Upoma, her estranged son Shoumyo (Jisshu Sengupta) and the eight-year-old orphan Biltu (Srijato Banerjee) who is not related by blood or family to the mother and son yet becomes both agency and subject that bring, somewhat unwittingly and somewhat by designed intent, the mother and son together.