Monologues on Partition Through the Eyes of Women

“History is witness to the fact that whenever there is violent uprooting and displacement of a people, the question of gender becomes a serious issue and at the same time, compulsions of survival begin to take precedence over moral concerns. We see it happening again like a re-emerging cancer in today’s world.”

This is a small segment of the prologue given by director Mahmud Alam for Janus Centre for Visual and Performing Arts’ three-part monologues called East Side Stories. “In a mono act, an actor is alone on stage and aware that every eye in the dim hall full of silhouettes is trained on him or her. Only the power of conviction will carry the performance through,” comments Dipanita Nath (March 27, 2015, Indian Express).

The Janus Centre for Visual and Performing Arts that opened “Black Box” for Performing Arts with East Side Stories has compact seating for 50. So, it caters to a selective audience. This reduces the performing space for the actor and Sanchayita Bhattacharjee Alam has to constantly negotiate her way through this space and yet not push over a bed or a chair or the bucket of water symbolically placed on one corner of the performing space.

The production design is fluid and flexible in keeping with the demands of three different plays presented and performed within the same space but the props and objects are placed with designed intent. A bench, a bucket of water, the sounds of the flowing water of the river, door bells ringing, doors being slammed shut are indicators of the traps Life has placed the woman in general and victims of Partition in particular.

Basically, the three plays are in English but the protagonist sometimes breaks into Bengali firstly to reaffirm that they are Bengali and secondly, because even when their nationhood is in question, their language is not. Mahmud Alam’s direction, sound design and production design fit neatly into the ambience of the performance and add to its realism. 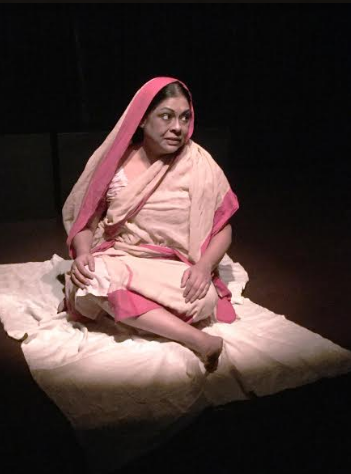 The three monologues find common bonding through the different Partitions of Bengal and also by the fact that all the three women were enacted by the same actor – Sanchayita. She does not need to perform multiple characters but playing the single one is more challenging. She faces the challenge and rises to it.

The very word “partition” creates images of long rows of men, women and children crossing an aisle that divides one country into two, with burdens on their heads, moving on and on, slowly, wearily, aimlessly as their figures stand silhouetted against a darkening sky. That is the larger picture, a good visual representation. But narrow this down to the micro level of a single human being, specifically a young woman, and the picture is unkind, inhuman and abusive. This is the truth and one cannot wish away the truth simply by turning one’s face away from another person’s tragedy taking place at a different time, a different space with a different history from one’s own.

Ayesha in My House, is an educated, smart, independent single woman whose family was forced to leave Calcutta in 1971 to Dhaka when East Pakistan became Bangladesh. She stayed back and went to her family once her education was complete. The play revolves around her visit to Calcutta three years later on an invitation.

During the brief trip, she has plans to meet her close friend Amit with who she had kept in touch with letters from either end. Does she meet him r? Or, must she go back with a broken heart to a country she does not truly belong to? Which is your country – the country where you were born? Or, the country you were forced to migrate to for the sake of the faith you are born in? 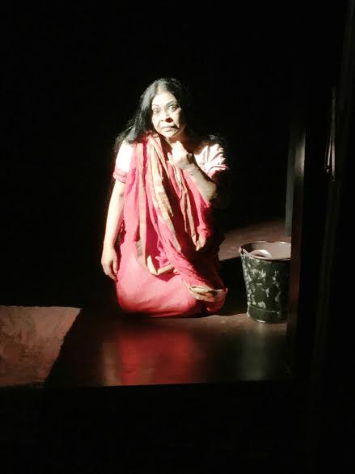 Sanchayita fleshes out Ayesha beautifully, breaking body and face completely, deconstructing herself when she realises the betrayal of the place she was born in grew up in. The way she registers the swift mood-changes as she arrives with hope, knocks at Amit’s door to find he is away and has left a note and then is heartbroken is emotionally moving enough to convince.

Prateek, the second mono-act is self-explanatory. Pushpita, heavily pregnant, begins to get labour pains on her way to East Pakistan on a boat with husband Ali Ahmad. The actor realises the increasing labour pains with great conviction through body language, facial expression and tone and pitch of dialogue delivery. The labour pains are coupled with the pain of being forced to leave the nation in which she was born and belonged to. But the child begins to get born as soon as the boat reaches its destination on the other side of the Mahananda river and Pushpita, confused about the newborn infant’s national identity, names him Prateek meaning “symbol” of harmony as he is born of a Muslim father and a Hindu mother.

But which country will he really belong to is the question that keeps nagging her. The new mother singing a lullaby to her little baby to put him to sleep – ghoom jaaye oi chaand, megh porider shaathey is touching. The quick changing costumes, dirtied and rumpled are imaginatively used that also function as dividing factors between and among the three different plays.

The Final Solution harks back to the Partition in 1947 and Mallika and her family arrive in Kolkata having lost everything except the clothes on their back. They find refuge in a railway station (Sealdah?) and Maillka sets out in search of food for her kids and work to keep the family together and alive. The price she has to pay is heavy as she senses the built-in and structured sexual exploitation she suffers at the hands of the very men who have promised to rescue her and give her a job.

But does she get a reasonably respectable job after all this suffering? Not really, but frankly speaking, this writer found this segment too cliché and melodramatic that cannot be said of the earlier segments. The music is just right though one hardly notices it, the action is so absorbing.

Betrayal in love, becoming a mother in the most politically turbulent of times, unwittingly creating an identity crisis in a new born baby, and last but never the least, surrendering to blatant sexual exploitation just to save the family from death by starvation make up East Side Stories. But do these three women – Ayesha, Pushpita and Mallika truly find the salvation they seek from their emotionally and geographically trapped worlds?

All these three women are bound by their womanhood, their forced displacement for which they are not responsible and by the tragedy of their national identity and their roots do not really make any difference to their victimisation in a patriarchal, “partitioned” world.

This is a universal truth and East Side Stories presents a microcosm.