The Memory of Nestor

A walk worth every breathless step

The climb up a tall acropolis, to King Nestor’s palatial complex in the Peloponnese region of southern Greece is worth every breathless step.

The journey through miles and miles of olive groves, hibiscus and rose bushes finally leads to the ruins of Nestor’s palace from nearly 1300 BC and feels like a pilgrimage, to the home of Nestor, one of the greatest storytellers of all time. 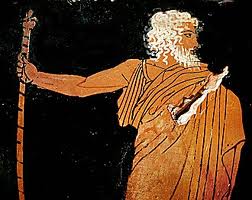 The trudge is in celebration of the memory of Nestor, an important character from Homer’s epic poem Odyssey.

In the text Nestor is remembered as a peace loving, wise ruler who recites one remarkable tale after another. His intent is to bring order in a very disorderly world that has emerged around him during the course of the Trojan War.

Although Homer writes about war and violence, it is his idea of peace and love that in the end emerges as the only viable alternative for all human beings.

The stories collected by Homer in the two epic poems of the Iliad and Odyssey are from 500 years before his time and from around 800 years before the birth of Christ. The narrative is precious as it speaks to us even today while giving us a glimpse into societies of very long ago.

Apart from being a great work of poetry Homer’s writing is also a study in how social problems were aggravated or resolved by people in the past. Despite humanity’s refusal to learn from history and from mistakes made by our ancestors, it is still a pleasure to read Homer.

The stories told by Nestor about his even more ancient past have helped to keep the history of his people alive to this day and serve as a window into ancient societies. Nestor’s memory, wisdom and art of narration connect the past with the now, also revealing that human beings have hardly changed in their continuous practice of envy, greed, love and violence.

Homer writes about war between the ruling family of Troy and a coalition of warriors like Nestor, Odysseus, Achilles, Agamemnon and Menelaus from different regions of Greece. There is a lesson to be learnt from everything that Nestor says and does. When Nestor speaks he inspires those around him to act.

From Nestor’s travel to different states to seek support for a coalition against the Trojans, the Greeks learnt the Mycenaean practice of reciprocity and the benefit of solidarity, especially in times of a crisis. This is an idea that is perhaps helping the Greeks today as they together face a deep economic crisis in the country.

Nestor warned the warring Achilles and Menelaus that he was older than them and could say anything to them.

Therefore let no man, not even the king, disregard my saying for he that foments civil discord is a clanless, hearthless outlaw.

The arrogant warriors did not heed the advice of Nestor and for that folly the Greeks had to pay a heavy price during the war with the Trojans.

The coalition of warriors put together by Nestor had attacked Troy after Paris, a Trojan prince kidnapped Helen, the Peloponnese queen of Sparta who was also the most beautiful woman in the world. It took ten long years for the Greeks to defeat the Trojans and to bring Helen back home. However Homer’s story does not end with the close of the war but continues as a journey of Odysseus, the Greek war hero who has gone missing.

The war is over but Odysseus has not returned to Ithaca and Penelope, his wife is miserable. Then Telemachus, his son decides to go in search of his father.

It is to the palace where I stand that Telemachus makes a secret visit to find out from the wise King Nestor if he has any news of Odysseus. Nestor and Odysseus had fought side by side in the Trojan War. Nestor had led a fleet of 90 ships out of a thousand that were launched by the Greeks to fight for Helen. Nestor was one of those warriors who had returned home safe after the war unlike Odysseus.

In 1939 the remains of Nestor’s double storey Mycenaen palace overlooking the Navarino Bay and the Ionian Sea was discovered. This is the same palace that had played host to Telemachus who received a warm welcome by Nestor here.

The excavated remains of the palace are an open-air museum and can be seen from above a railing that is covered with a roof. The throne room with a large circular hearth is impressive. Out of many, one doorway marks the way to a bathroom where the nearly four millennia old bathtub in terracotta, with a clay step remains well preserved. This is the same tub where Nestor’s daughter Polycaste had bathed Telemachus and later massaged him with oils perfumed in local herbs.

Writes Homer of the hospitality received by the young Telemachus at the hands of the lovely Polycaste:

She held fine cloth and a cloak to put around him when he came out godlike from the bathing place.