Looking For The Best Nihari In Dilli

NEW DELHI: Perhaps no other dish in the Indian subcontinent brings out the emotions like nihari does. Emotions that are deep and varied. It’s a dish that has been a subcontinental favourite since its reported invention sometime in the 18th century. But the last word on where nihari was born, who makes it best, and the best way to serve it and even eat it, is still out there.

The most popular story is that nihari was invented by chefs in Delhi during the last days of Mughal rule in the 18th century. Other versions track its origins to the kitchens of the nawabs of Lucknow; others point to Hyderabad. But first a few lines about nihari.

The word comes from nahar, which means morning. Traditionally, nihari is cooked overnight in a huge cauldron (degh) called shab degh and eaten as an early breakfast. The preferred cut of meat is the shanks, but other portions are also used nowadays. The meat is slow cooked for seven or eight hours, with as many as 24 spices, including aniseed, powdered ginger, mace, cumin, peppercorns, nutmeg, cinnamon, cardamoms and cloves. It is served with a sprinkling of thinly sliced green chillies, slivers of ginger and cut lemons for squeezing. 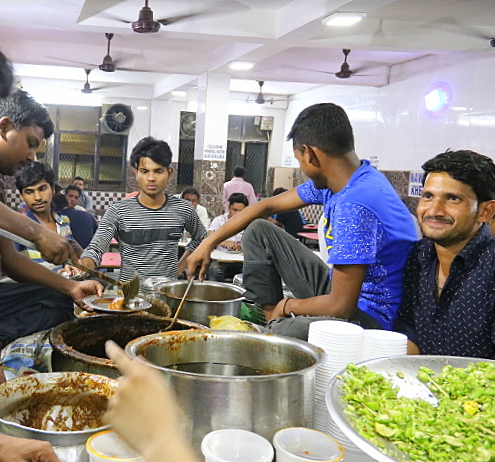 The first test of a good nihari is that the meat pieces should hold their basic form when served, but still be so soft and tender that they break on being touched. The flavour of the gravy should be subtle, not overpowering. But with a lot of oil used nihari a difficult dish to contend with. To make your portion of nihari even richer you can add brain or bone marrow topped with butter. It’s a heavy concoction, which is why it is traditionally eaten in the morning hours, preferably in winter. A hearty meal of nihari and khamiri roti, first thing in the morning, and you are good for the day.

But there are many more aspects to the perfect nihari. It is the practice of some chefs to add a few kilos of each day’s leftover nihari to the next day’s pot. This reused portion of nihari is called taar, and is believed to lend a unique flavour. Some nihari outlets in old Delhi still boast of an unbroken taar going back decades. Then, some people attribute medicinal properties to nihari and consider it the perfect antidote to colds and the seasonal flu.

Another layer of the nihari argument is which is the best portion of nihari -- the one at the beginning of the serving cycle, in the middle, or at the bottom of the cauldron. The connoisseurs point out that taste and texture change as you start from the top of the cauldron and work your way down. Opinions differ as to which of these portions is the best. 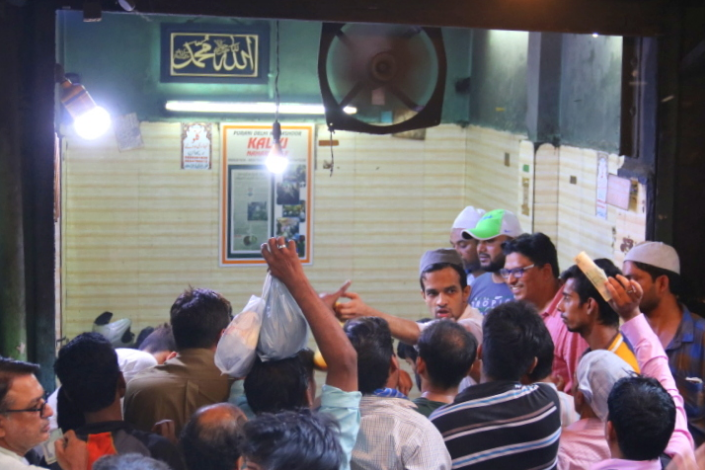 But the most hotly debated point is, who makes the best nihari in Delhi, the home of nihari?

Each nihari outlet has its own set of dedicated and loyal fans, with a rich sense of competition topped with a heavy dose of pride. If, at a particular nihari joint, you happen to mention a rival from another part of the city, you surely will be made to eat your words with your portion of nihari. You will be accused of being an upstart, ignorant of the fine taste of nihari.

Every kitchen varies its ingredients or cooking method, creating a slightly different outcome. Some use more cumin, some may use anardana and some may not. The loab (smoothness) of the gravy, an essential part of nihari, will also be achieved differently, by using flour, refined flour or chana powder. Some use a mix of all three.

It is clear though that the nihari served by bigger places (such as Karim or Jawahar) pales in comparison to these standalone masters who have specialised for decades in the dish. The essential difference is that the bigger, more cosmopolitan restaurants use goat meat, and spice it less, whereas the nihari speciality places use only buffalo meat. 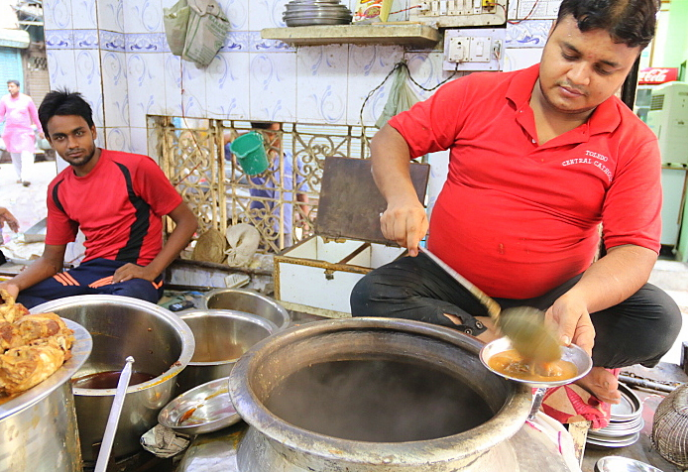 Besides the fan club behind each individual nihari brand, there is a strong sense of rivalry depending on the area the nihari comes from. Broadly speaking, these are Baade ki nihari, Matia Mahal ki nihari, Ballimaran ki nihari (Haji Saeed nihariwale), Nizamuddin ki nihari and Seelampur ki nihari.

So, brave the congested lanes and chaos to take your pick from Kallu, Noora, Shabrati, Zafar or Javed. Who has the best nihari in the city? The debate is still open and your opinion will also count.

The nihari outlets we are talking about offer just nihari and freshly made khamiri rotis to go with it. They usually serve nihari only in the morning hours but some do so in the evenings as well.

If the size of the crowd jostling to get their hands on a serving of nihari is your criteria, then Kallu’s nihari is the best in Delhi. To have Kallu’s nihari, it is not enough to reach the shop (tucked in a narrow lane behind Delite Cinema in Chatta Lal Miyan, near Turkman Gate). First, you have to be there on time, as the nihari runs out within one and a half hours of the 6 pm opening of the degh. Then, you have to push past other determined nihari lovers using pure physical strength, tough resolve and love of nihari. Getting your nihari packed is your only option as the place offers no seating. It’s best to carry your own bowl or container and get your nihari packed in it.

Mohammed Rafiquddin, popularly known as Kallu, opened the shop in 1990. He passed away in April 2016 but his legacy lives on through his son Faizan, and his brothers. As you place the first piece of hot khamiri roti dipped in nihari in your mouth, everything becomes clearer. You know why Kallu nihari enjoys such high status among nihari lovers and why there is such a crowd. It is much more rewarding than the trouble it took. The gravy is on the thin, hot and spicy side, and perfect. The meat just melts in your mouth and the delectable curry taste lingers on.

Haji Shabrati nihari Wale have been dishing out nihari since 1957. The place has its own dedicated fans who swear it’s the best nihari in town, better than the much-fancied Karim or the famous Kallu or Noora. The man manning the nihari degh tells us it’s a nihari with twelve spices (barah masaale ki nihari). The place serves in the wee morning hours and in the evenings too, from 6 pm. I found the shabrati nihari was softer-tasting, beautifully spiced, and not as hot as the one served at Kallu. The meat pieces were perfectly done and the gravy too carried perfect thickness. There are tables laid here where you can sit and have your roti-nihari in peace (no air conditioning though). Afterwards you will begin to see a lot of merit in the opinions of those -- and there are many -- who think this is the best nihari in the city.

To reach Haji Shabrati Nihari Wale, walk down from Jama Masjid’s Gate No. 1 or take a rickshaw. It is a ten-minute walk through the crowded, busy and colourful Matia Mahal bazaar. The street holds many other famous eateries, such as Karim, Al Jawahar, Aslam Butter Chicken and Haji Mohammad Fried Chicken. But if your mind is fixed on finding a place that serves one of the best niharis in the city then you’ve got to venture further. Walk on till you’ve reached the Chitli Qabar area. Then look for a lane on your left that has the famous sweet shop Ameer Sweets. A few steps down this lane lies your destination.

Though a relatively new entrant, churning out nihari for just 25 years now, for many Javed Famous nihari is the final word. The nihari is taken out of a huge cauldron placed at the entrance, and served in a deep steel plate, garnished with rogan, ginger and green chillies. You are given the option of adding some bone marrow or brain to the nihari, along with a dash of ghee or butter. The khamiri rotis come out hot from a tandoor placed in another corner of the restaurant.

The restaurant offers the best seating options compared to the others mentioned here. The nihari served here also compares well -- it is not very hot and the flavours are subtle. Javed Nihari traces its origin to Baada area of Delhi, known for its rich culinary traditions. According to the owner, Wazir Beg, “This place was started by my father Amir Beg, and he named it after my younger brother. What makes our nihari stand out is the fact that we start cooking it at 8 in the morning and stir it continuously over a low flame till 6 in the evening, and only then serve it to customers.” No wonder then that the result is just perfect.

This is another famous place which serves only nihari. “Noora’s is by far the best nihari in Delhi. It is streets ahead of Kallu or Shabrati,” says one regular to Noora’s. It is a nondescript one-room place with no tables, not even a signboard. But the crowd that throngs it early mornings is proof that it doesn’t need any of these things. The waft of flavours emanating from the shab degh here is enough to pull in all the nihari lovers and connoisseurs.