The Subtle and Fragile Influence of Women in the Mughal Courts

Book review Daughters of the Sun

Daughters of the Sun is a delightful documentation of some amazing women from medieval India. Almost forgotten by historians, author Ira Mukhoty’s resurrects many of them from the dustbin of history only to warm the heart of readers like myself.

Much of Mukhoty’s reference is from Humayun Nama, an extraordinary document written in Farsi by Gulbadan Begum and translated into English in the early 20th century.

Gulbadan Begum is the sister of Humayun and daughter of Babur and she came to Hindustan at the age of five years. Much later in her life her grandnephew Akbar asked her to write a biography of Babur and Humayun. Gulbadan Begum’s writing is precious as it gives a first hand account of life of women from the 16th century in prose that is spontaneous, vivid and not at all selfconscious.

She is a close friend of Hamida Bano, wife of Humayun and gets to know her brother even better from what she is told about him by his wife. All this information is collected by Mukhoty to sketch one mesmerizing account after another of life inside the female quarters of that time.

At its most crowded, the royal female quarters had included slaves of diverse ethnic backgrounds. Ethiopians, Turks, Tartars from Central Asia and Kashmiri women were mostly chosen as personal attendants. These women are described as large, robust, physically intimidating, skilled and strong warriors. They had dressed uniformly and were armed with bows, arrows, short daggers and firearms.

The female household of that time was an industrious, carefully calibrated and orchestrated world. It was a busy well-ordered place where each woman knew her place and her worth. It was the home of accomplished educated women who were prized and the well spoken, articulate and cultured ones had the most chance to advance. Naturally there were intrigues and jealousies as well as hundreds and sometimes thousands of people lived together under one roof.

However the overwhelming nature of the household was one of warm support and companionship, a complex nuanced world of female complicity and understanding one in which excellence was valued and women learned all the skills required to run a city for there were no men within, writes the author.

Unlike the Eurocentric perception, the female household was not a station of erotica alone. The place was not a reserve only of the many wives of the emperor but the home of countless women enjoying different relationships with his majesty. It was populated by many widows, foster mothers, refugee women and was a sanctuary for elderly grandmothers, widowed stepmothers, unmarried relatives, servants, Rajput princesses, children, attendants and tradeswomen of all sorts.

In this book I have tried to bring to life the stories of those Mughal women who have been forgotten –women whose influence was more subtle and fragile or who have been subject to the casual erasure of time. Some are not royal women at all.

But most of them are like Hira Kunwar Sahiba Harkha Bai, the 20 year-old daughter of Raja Bihari Mal of the Rajput Kachhawaha clan of Jaipur who marries Mughal Emperor Akbar in 1562:

Harkha Bai arrives at Akbar’s court resplendent in the sensuous and excessively feminine style of the Rajput nobility. She wears a heavy, swinging and gathered ghagra which stops well above the ankle and a tightly fitting choli, tied at the back with tasseled strings…Light flickers off the heavy gold jewellery she wears-the swaying ear-rings and nose-ring, the clinking bracelets and the girdle of gold. In just a few years this Rajasthani style will irrecoverably influence Mughal court dress and etiquette. Tight jackets and tunics in diaphanous materials, elaborately printed will replace the more pragmatic flowing qabas of the Mughal women. Hindustani materials and textiles used will also subtly enter the court. The wild silks of Hindustan, gathered from silkworms living on mulberry trees and castor oil plants in the Himalayas have been known for almost a 1,000 years before the Mughals are smitten by it…Hairstyles will change too and the Turkish ladies, instead of wearing their hair loose, start to twist it into a flat pad at the back from which a few curls rolled on.

Hidden behind her official title of Maryam-uz-Zamani, Harkha Bai rose to the status of a formidable and independently wealthy matron, trading through her own ships in the dangerous pirate infested waters of 16th century Hindustan.

A decade after her marriage to Akbar, Harkha Bai was shifted to the hospice of Sufi mystic Sheikh Salim Chishti in the village of Sikri 65 km from Agra. The mystic has promised Akbar three sons and in1569 Harkha Bai gives birth to Salim, later known as Jehangir, first Mughal Badshah born of a Hindu mother. The daughters and daughter’s-in-law of Sheikh Salim serve as wet nurses to the newly born prince.

When Harkha Bai joins Akbar’s palace she is allowed to bring her traditions and her beliefs with her. Her son the young Salim Mirza marries her niece, the daughter of Raja Bhagwant Das. In fact all the three sons of Akbar marry Rajput women and each time a Rajput bride becomes part of Akbar’s family a sliver of Rajasthani Rajput culture gets woven into the Timurid-Persianate way of life at the Mughal court.

Another portrait is that of Rani Durgavati, the wise ruler of Gondwana from 1564. She is a benevolent leader loved by her people. She is admired as a fierce warrior who is always quick to defend her territory herself, on elephant or on horseback. She goes hunting regularly and is a good shot with gun and arrow.

Rani Durgavati fights gallantly. She defeats Baz Bahadur of Malwa and paramour of Roopmati but is killed in battle with the Mughals. From the furnace of the battlefield, Kamlavati, a sister of Durgavati and the young fiancée of the dead Rani’s son, are rescued and welcomed into the household of Akbar in Agra. Here they share stories of the very chivalrous Durgavati. They also talk about their own belief in female honour and chastity.

All this information is noted down by scribes like Gulbadan Begum who also has direct access to the royal library, part of which is within the female quarters of the palace and open to all women, men, children and servants.

With time, the complexion of the female quarters of different rulers changes but not the enormous respect for female members of the family. Older matriarchs were most influential during the early days of the Mughals and their advice often helped to keep warring brothers together and the empire intact.

When Akbar ruled from the age of only 13 years a group of foster mothers enjoyed great power. As the nomadic Mughals settled into their growing empire in Hindustan their wives gained in influence, like Noor Jahan and Mumtaz Mahal.

Later unmarried daughters like Jahanara had ruled supreme during the tenure of Shahjahan as emperor. Under the last of the great Mughals Aurangzeb, the importance of his daughters Zebunisa Begum and Zeenat-un-Nisa Begum begins to dim.

And very soon after South Asia bids goodbye to enlightenment in the region. Once Hindustan is forced to become the jewel in the crown of the British Raj, Victorian values imposed by colonialists seem to drag an entire civilisation back in time, as if by several centuries. 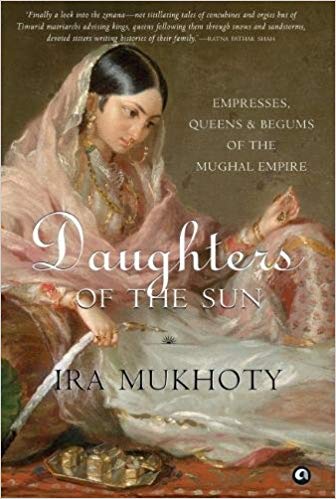 Daughters of the Sun: Empresses, Queens and Begums of the Mughal Empire by Ira Mukhoty is published by Aleph Book Company, 2018.