There is Nothing Accidental About These Threats, It Is a Pattern: T.M.Krishna

“There is nothing accidental about it, these threats, and horrendous efforts to intimidate artists. Yes Bollywood has completely deserted us, it will never speak up,” said Carnatic music expondent T.M.Krishna in an interview to The Citizen.

This was shortly after he along with other Carnatic musicians had received threats for singing Christian hymns and while most apologised Krishna went public with his decision to defy this bullying, and release one such Carnatic song for Jesus or Allah every month.

“ I will not allow them to take away our space,” he said. This despite being trolled on the social media and receiving calls threatening physical harm. One Ramanathan from the RSS-S (an extra S, Krishna laughed) said he would break his legs. He said that there was nothing casual about these threats, as intimidation was clearly part of the agenda. They want to strike fear, and terrorise people, he said.

Are you scared? Well not scared, but yes of course this all enters your consciousness, and you do watch over your shoulder,” Krishna said. But I decided to call them out, this is the risk one takes, but we cannot allow our beautiful country to be so destroyed, he added passionately.

Krishna admitted that there were many musicians who wanted to speak out, but were afraid. He said it was imperative to retrieve our totally diverse culture from these people. And for that everyone has to sit down and work together. He said that one odd letter of protest now and again was not enough, but it was necessary to take cultural resistance to the grassroots.

“We should form secular cultural unity in every town, and bring people together to resist this oppression with music, dance, drama. There has to be action, and not necessarily at just the political level. These cultural centres need not be of any political party, but of like minded persons who care about the work that has gone into 70 years of freedom, and are determined not to let India be destroyed.”

Krishna, quiet and yet firm, has brought a new dimension to his music in recent years, being one of the few well known cultural artists to speak out. And hit hard at the efforts to divide the country. He has taken on trolls on his Facebook account, and been vocal in standing up for what secularism at every level. The new attack on Carnatic musicians like him, as he said, is well thought out and cannot be dismissed as accidental. 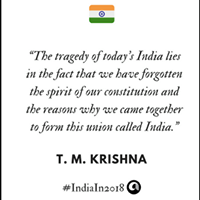 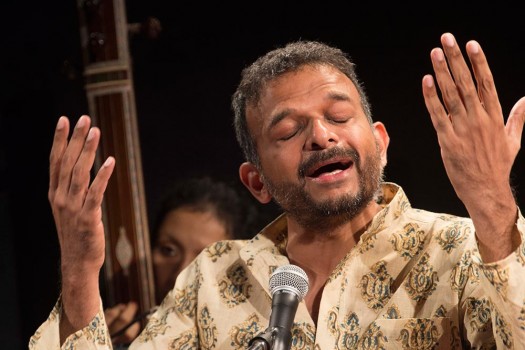 What about Kamal Hassan, the artist who now has a political party? Possible to make common cause with him? According to Krishna Kamal Hassan is now seen as a political figure, and has morphed into a politician. Anything he does will now be seen as political, and while he can support any such effort, the initiative has to come from the progressive and secular culture world. Krishna was clear about that.

Speaking about Bollywood and its complete failure to speak out for freedoms and rights, Krishna said, it represented a feudal culture. And after independence, feudalism has been the greatest danger to democracy in India, he added.