All In A Name: How Can Ganjing Be Replaced By Ataling?

The Hazratganj Crossing is still there. It is just the name of the area at one end of Lucknow’s iconic shopping street that is changed to Atal Chauraha.

The Lucknow Municipal Corporation decided to do so in memory of Atal Bihari Vajpayee who lived in Lucknow after independence as editor of Rashtra Dharma and Panjanya, two magazines published by the Rashtriya Swamsevak Sangh (RSS).

The former prime minister continued to be in and out of the city throughout his life and won five elections to the Lok Sabha from Lucknow.

The renaming of the 200 year old Hazratganj crossroads has annoyed many citizens. The annoyance has little to do with Lucknow’s respect for Vajpayee. It is the motive of the authorities that is suspect, of trying to push selected memory upon the past of all citizens. 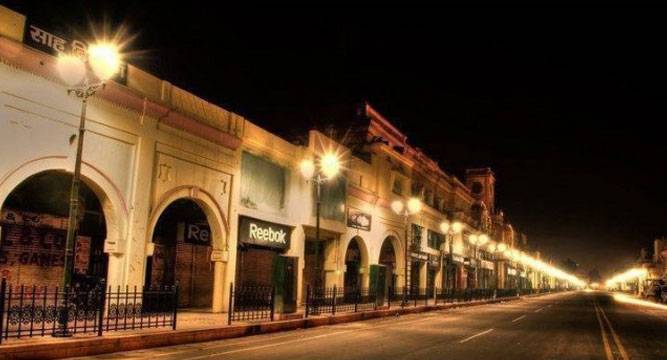 Mohammad Haider, leading city lawyer and heritage enthusiast told The Citizen that Lucknow loves the late Prime Minister but politicians in power are using his name to create unnecessary controversies in the city.

“It is not the commemoration of Atal Ji that has hurt sentiments but I question the motive of the authorities,” adds Haider.

The decision of those responsible for changing the name of the crossroads is seen as an assault on the collective social, cultural and historical memory of citizens and an attempt to shake their sense of belonging and continuity in the city. It is doubtful that the gesture is to inspire people to follow in the footsteps of Vajpayee but an attempt to deprive the city of a certain portion of its collective past.

Commemorative landscape is the term used by architects and urban sociologists to remember the past. The name of a street is one of the most popular forms of commemorating a person, or an idea. It is the simplest form of keeping a collective memory alive, and favoured by populations since antiquity around the globe.

Apart from providing postal service conveniences, places and streets are marked as the link of a peoples past to their present and future. It is a symbolic gesture to claim ownership of a place and to nurse memories associated with that particular place. The commemoration is an everyday reminder of where the present comes from.

Changes in the name of a landscape do take place but mainly to avoid postal confusion when two streets are found to have the same name. Political motivation is the more vicious reason in naming and re-naming commemorative landscapes.

“It is like Connaught Place in Delhi is still CP, and not Rajiv Chowk. Similarly Hazratganj is forever, and so is ganjing,” insists Chauhan.

Ganjing is a very Lucknow thing to do and refers to an aimless stroll up and down the one-kilometer long Hazratganj street. The purpose of ganjing is not to buy or to sell but to practice and to enjoy the art of walking and talking together with a group of buddies all dressed in their Sunday best and unaware of the heady effect upon them of the sun, setting to the tune of the gentle breeze visiting from the east.

How can the experience of ganjing ever be replaced with ataling?

The recent change in the name of the Hazratganj crossroads to Atal Chauraha smacks of petty politics. However similar gimmicks are not unusual. Politicians do this all the time all over the world. The agenda of the mean ones is to promote their version of history and to reinvent the identity of a place and people.

The magnanimous ones even honour citizens from other parts of the world and who have never walked the road named after them but whose life is a source of worldwide inspiration. For example there are roads named after Mahatma Gandhi in at least a dozen other countries. There is the Raj Kapoor Crescent in Brampton, Canada and AR Rahman, Oscar winning musician too has a street named after him in Canada, in Ontario. The German cities of Heidelberg and Munich have named landscapes in memory of poet Muhammad Iqbal, and the Swami Vivekananda Way is well marked in Chicago, USA.