The Hill Tea Gardens of Bengal

A tea garden in Darjeeling

Recently West Bengal saw a steep increase in wages at a time when trade unions have been demanding a minimum wage rate for tea workers. In August nearly three lakh workers in North Bengal called a three day strike. After several meetings the state’s Trinamool Congress government announced interim wage hikes twice this year, to the tune of Rs 34.50 with an additional Rs 9 as cash component for food grains, which the state provides to tea companies as a subsidy, who then distribute it among their workers.

Altogether, tea companies operating in West Bengal have now to pay a daily wage of Rs 176 per day per worker. Cha Bagan Trinamool Congress Mazdoor Union leader Mohan Sharma said his party welcomes the decision. “This proves the state’s sincerity towards tea workers.” However, trade unions affiliated with other leftist parties and many others that are part of the joint forum still insist on a minimum wage being fixed, as they feel interim measures cannot truly resolve any problem.

India earned $785.9 million from the export of 256.6 million kgs of Indian tea during the last financial year, but tea garden owners in Darjeeling are still showing losses and taking loans from banks. After a strike lasting 104 days big planters are selling their gardens in Darjeeling. 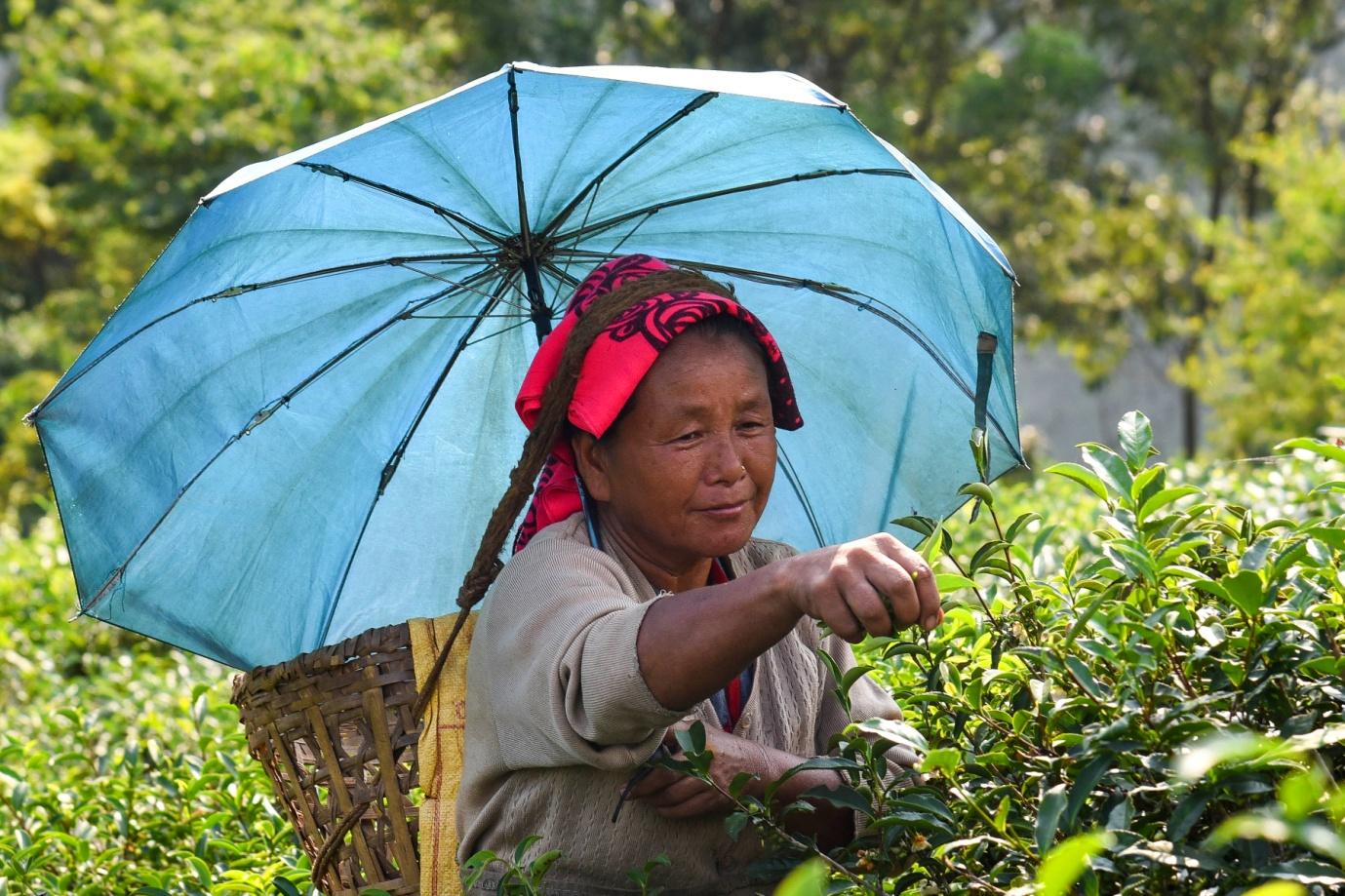 Three tea gardens in Darjeeling have been closed since 2015. They are owned by TMC MP K.D. Singh’s Alchemist Group

In the hill tea gardens of West Bengal malnutrition, disease, unemployment and human trafficking are no longer newsworthy. As no panchayat election has taken place in the past few years, access to government welfare schemes is very poor. In the Dooteriah tea garden, which has been closed since November 2015, there were four divisions with 2,584 workers at the time of closure. The Peshok and Kalej Valley tea gardens also stopped operations at the same time. The workers have not received their wages since 2015, and the company looted their provident fund amounting to approximately Rs 2 crore.

These three gardens are owned by Alchemist Group. It has been reported that the owner and Trinamool Congress MP K.D. Singh is in trouble with the Securities and Exchange Board of India. He has been accused of trying to flee the country.

Gyan Bahadur Rai, a worker at the closed Dooteriah tea garden said, “More than 60% of the workers have either migrated to other states or are working in other gardens. 60 to 100 workers are still plucking leaves and produce handmade tea which is locally marketed by a joint action committee.” 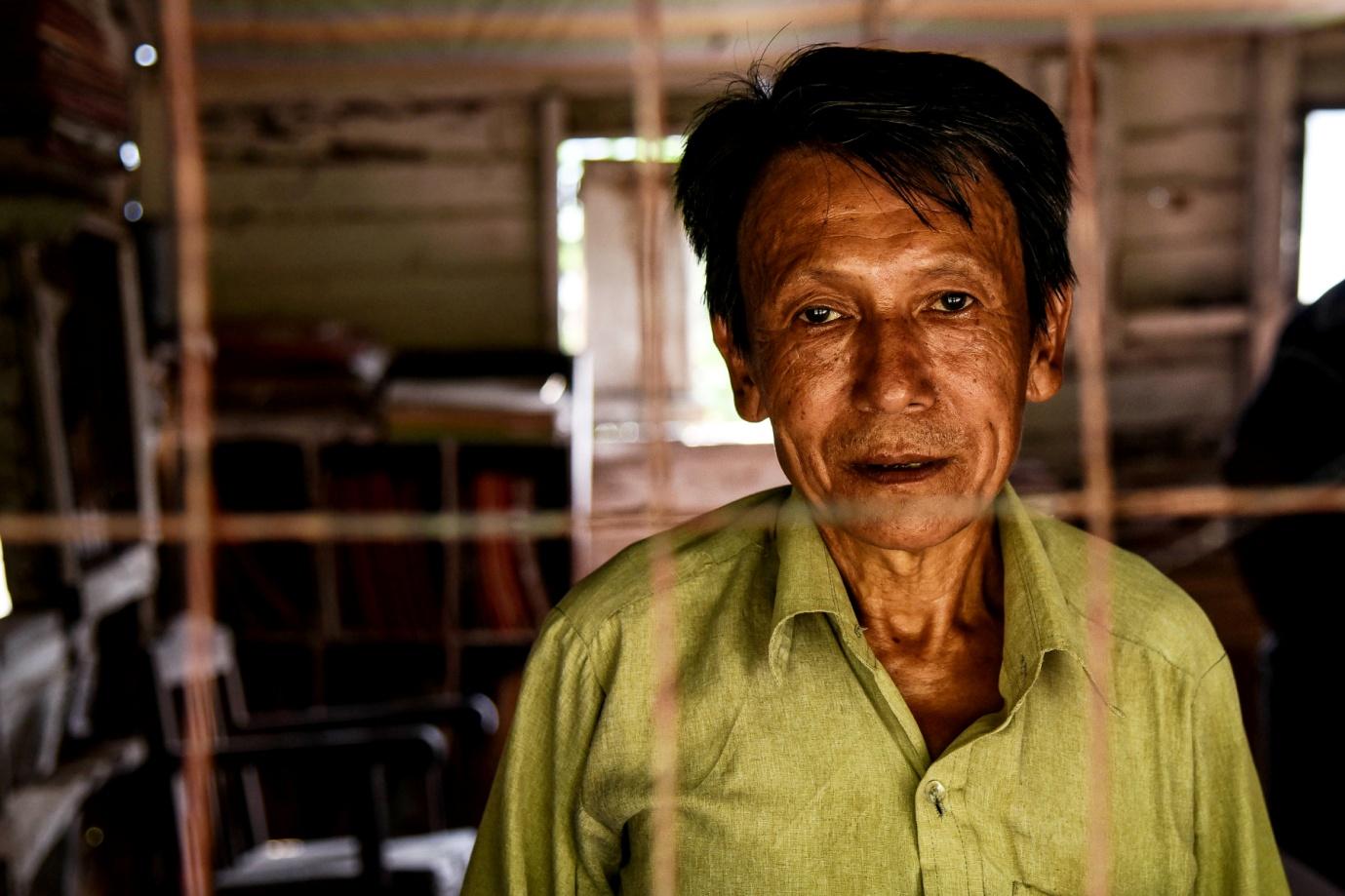 Gyan Bahadur Rai, a worker at the closed Dooteriah tea garden in Darjeeling

Workers at the Peshok tea gardens are also producing handmade tea in the same way. The joint action committee formed after the closure functions as a profit-making authority rather than working for workers’ welfare. The Financial Assistance to Workers of Locked out Industries (FAWLOI) Scheme is unheard of in these gardens. Thousands of jobless workers in scores of tea processing factories, once an integral part of tea gardens, could have received Rs 1500 per month if FAWLOI had been implemented, but nothing was done. Chewang Sherpa, the assistant labour commissioner of Darjeeling, said there is a “technical problem” with these tea gardens. “The company didn’t declare these gardens locked out or abandoned. So the labour department can’t support workers of these three gardens.” 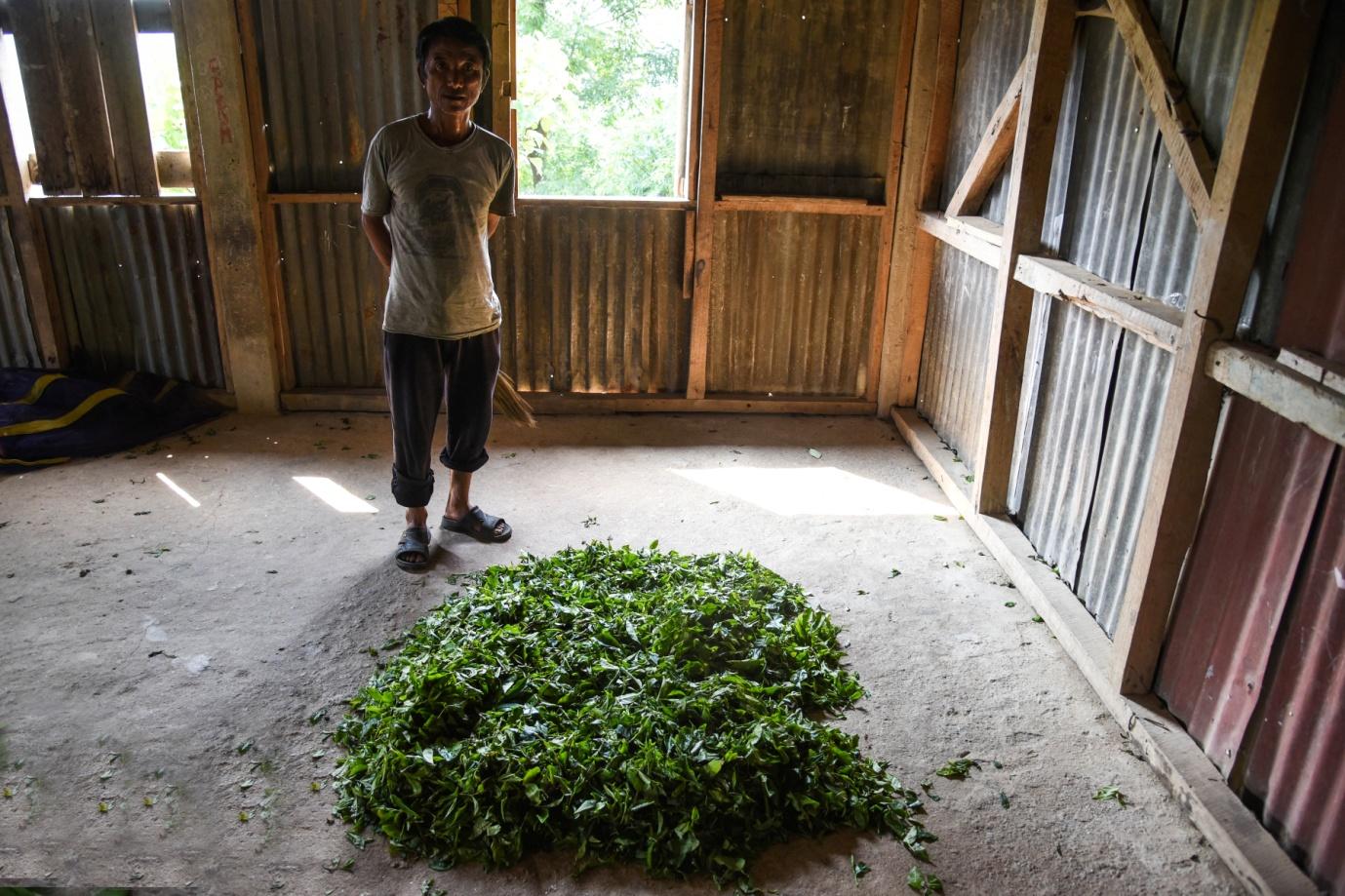 In these gardens the guarantee of 100 days’ work under NREGA is symbolically implemented at best. People usually get only 30 to 50 days of employment. Villagers also complained about the irregular ration supply. Even the old-age pension scheme has not benefited the elderly persons in these gardens. Health services have stopped completely since these gardens were closed. There are some other problems: the high school is located 6 km uphill, in some areas where bushes are grown wild animals like leopards and boars entered the workers’ colony. The Pradhan Mantri Awaas Yojana and construction of toilets under Swachh Bharat has started trickling in, but one needs to be really well connected to avail of it. 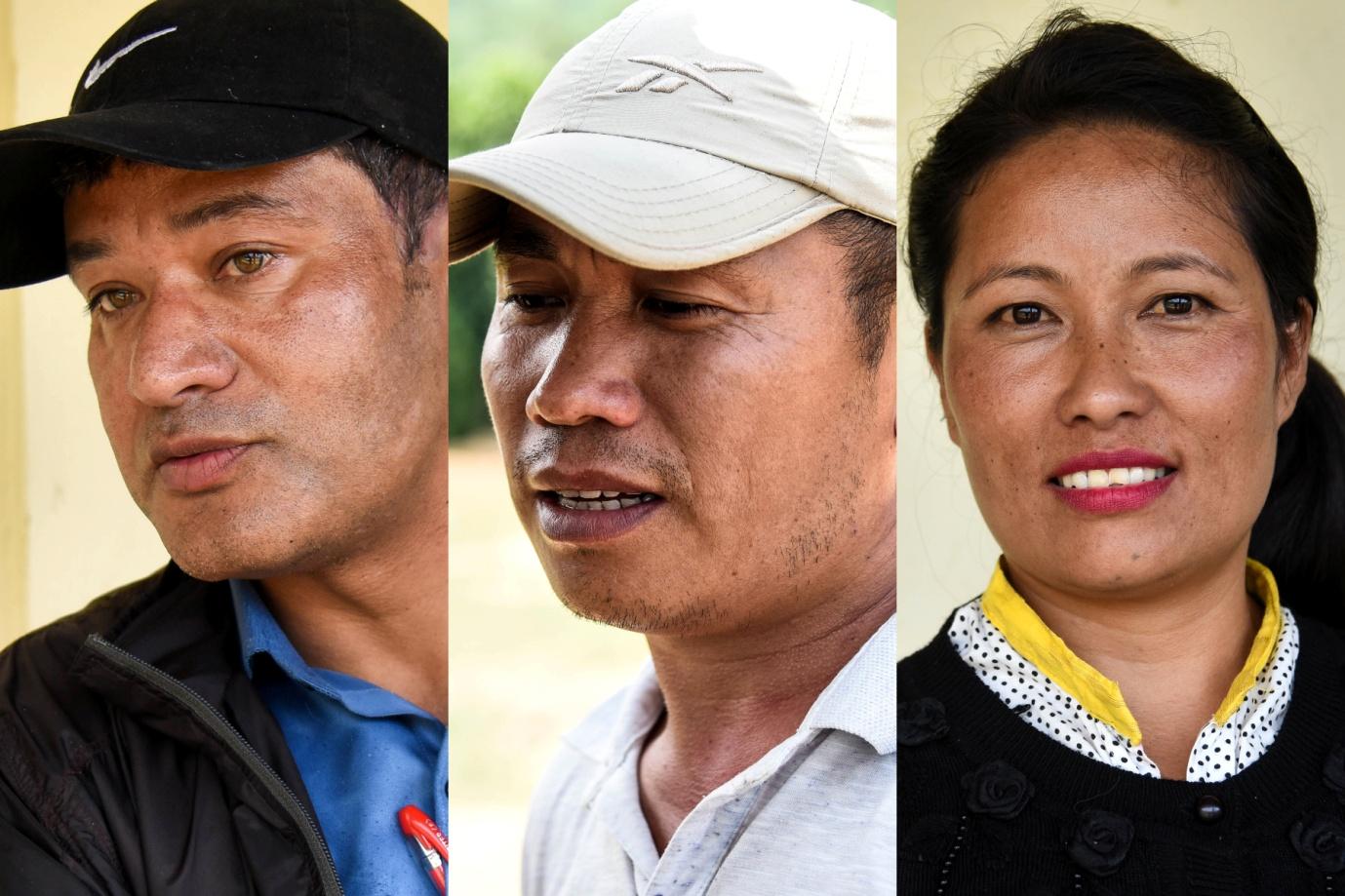 There are six classes at the Dooteriah Balasun primary school, but only two teachers. Headmaster Dipen Chhetri said, “We have 35 students in my school. We are only two teachers managing six classes. Sometimes our midday meal cook Rabina Rai takes classes with us.” When I visited the school I found 16 students present on that day. Teachers were taking combined classes for Class I and III students. 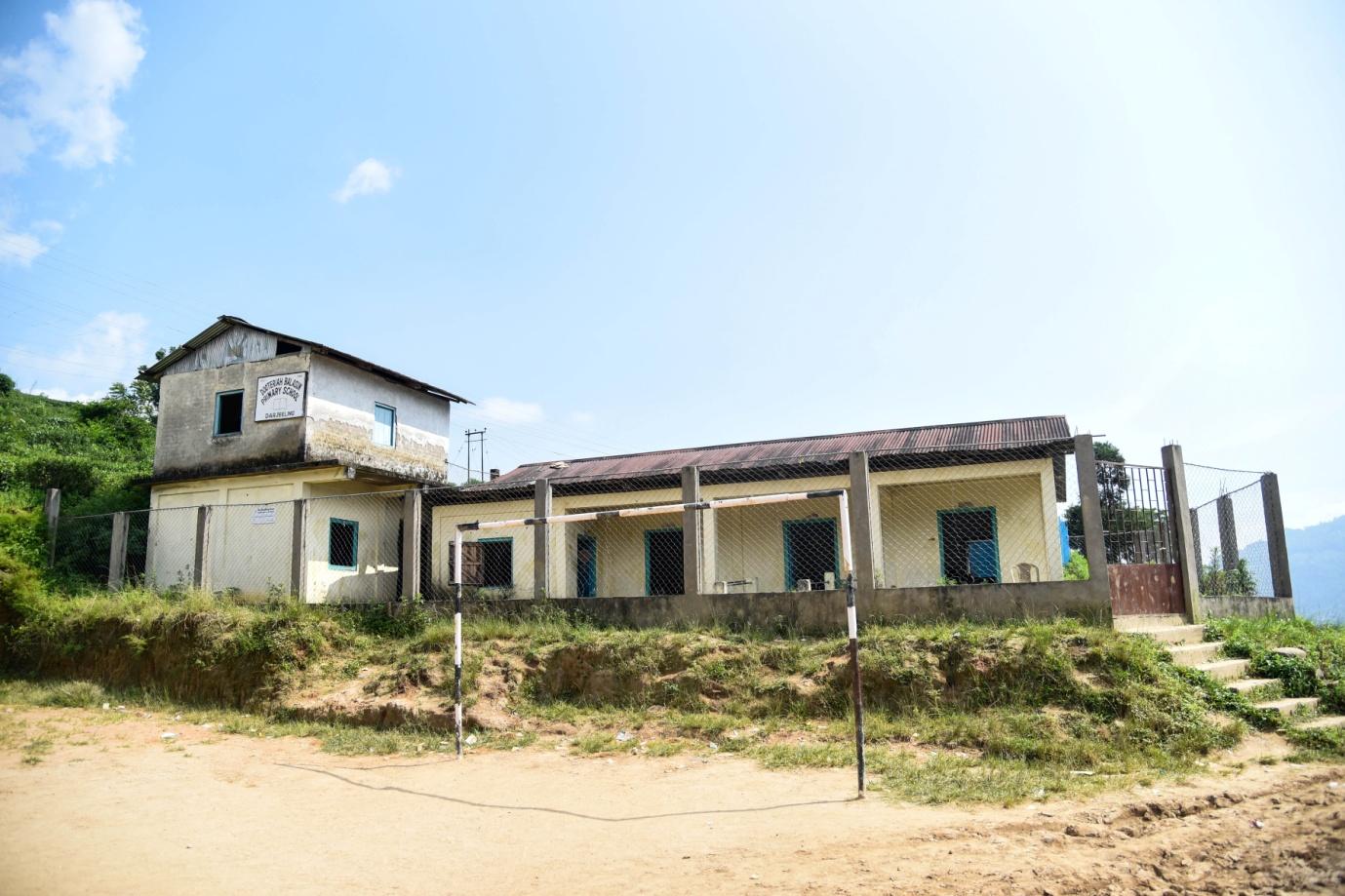 Assistant teacher Himmat Pradhan pointed out, “As migration rises, parents are going with their children so the rate of school dropouts is getting higher and becoming a trend here. Girls are admitted to government school and boys are in private school to get better education.”

The nearest high school being 6 km uphill, it is difficult in the monsoon season to attend school. As there is no health centre nearby workers are going without treatment for fever, tuberculosis, jaundice and anaemia.

There have also been a few cases of unsafe migration. Sanjita Chhetri of the closed Dooteriah tea garden said, “My mother (Sanja Chhetri, aged 40) migrated to Delhi in early 2017 but we have been unable to contact her since last June.” 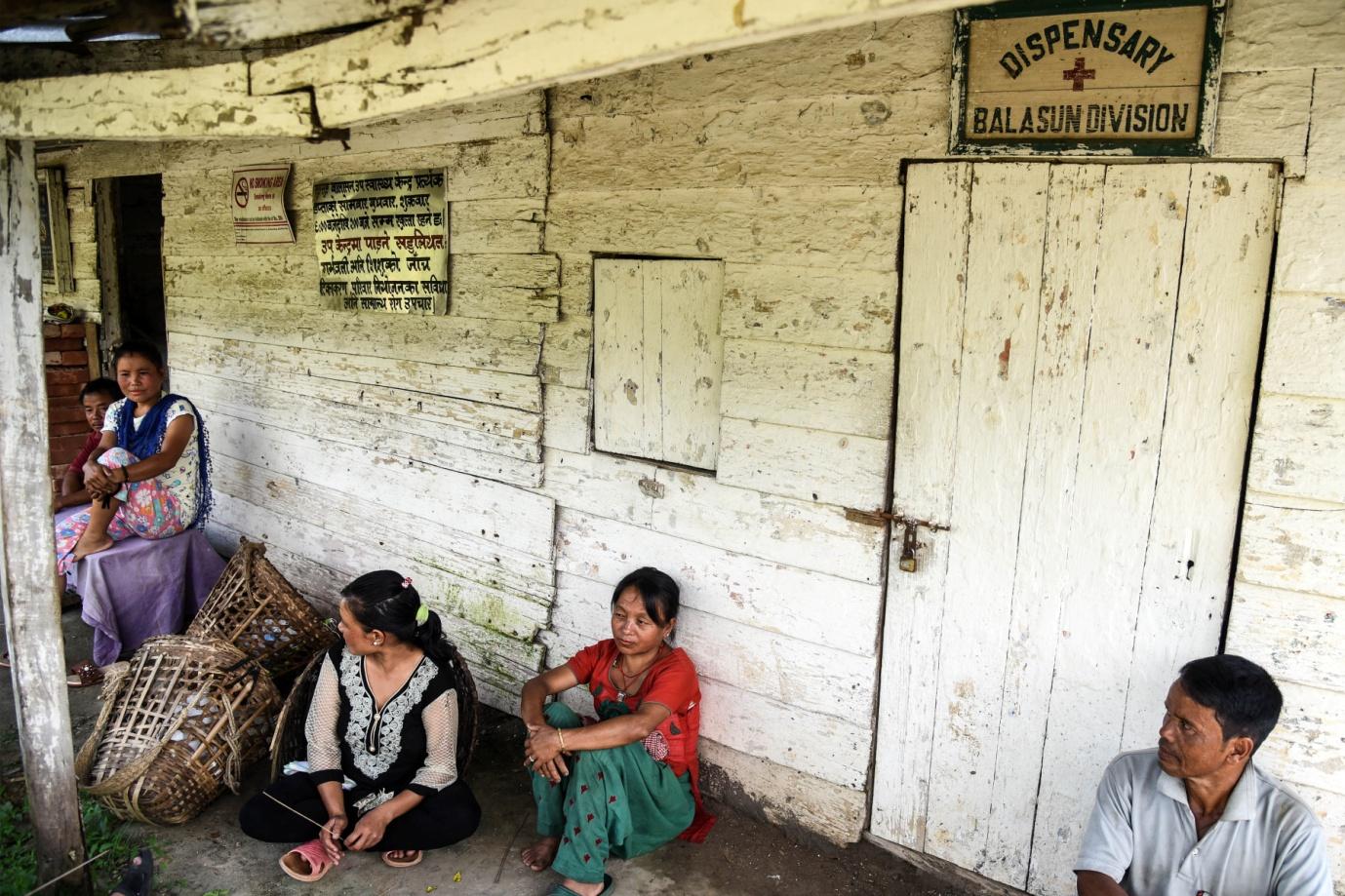 Workers wait outside ration shops in the closed tea gardens

Alchemist-Group owned tea gardens have been closed since 2015. Bushes are growing all over the gardens

A report suggests that the attitude of garden owners during the last couple of decades has changed. Tea gardens are being taken over by “promoters”, who do not have any prior experience in the tea industry. They have been taking over gardens on lease. They are driven by motives of short-term profit. They neither look after the existing bushes nor do they take up fresh plantation activity. Huge amounts of money, which they get from the Tea Board (a toothless central government agency) and as loans from banks, are siphoned off.

However, we witness tea fetching low prices at auction. We are told that the tea industry is in crisis. But it is not clear how much tea is being sold in the direct market – this amount is greater than that sold at auction. Mazumdar explains, “Production companies maintain two account books. They will only show the 30% of production that they send to the auction house, and send the remaining 70% directly to the open market. The norm says the owners must submit accounts of price and amount of tea sold to auction centres only. Neither the Tea Board nor the WBTDC is willing to stop this.” He also finds big production companies like Tata and McLeod Russel are selling their gardens in the hills and getting into the retail market.

Subba disputed the claim that climate change has affected the quality of tea production in Darjeeling. He pointed out that the garden owners are more concerned about profits rather than cleaning the bushes and replantation activities. “Workers are now forced to collect more leaves as companies demand that each worker must pluck 20 kgs of leaves per day otherwise they will deduct money from their salary. So workers are plucking four leaves one bud instead of two leaves one bud. The taste of Darjeeling tea is falling due this.”

To fix this, Subba said, “The central government should have control over the branding and retailing of Darjeeling tea in the international market, and the WBTDC which is a toothless state government authority must ensure a fair auction process in the state.”

Iconic tea producers in Darjeeling are now turning their heritage bungalows into tourist resorts. Tea producers like Ambootia and Orange Valley are to start a new project in their garden, while most of the existing tourist bungalows like Singtam and Goomtee are going in for a big expansion. The Goodricke Group has recently geared up to reconstruct their heritage bungalows in Thurbo and Badamtam tea gardens into resorts. According to experts, more and more gardens are embracing tea tourism in their hunt for new ways to earn revenue. It will give tourists an opportunity to experience the colonial lifestyle in the lap of the Himalayas.

But it offers no benefits to its workers. It is even claimed that there is no provision under the West Bengal Estates Acquisition Act, 1953 for such subversion of tea garden lands. The act in fact specifies that “the land can only be leased out for tea cultivation. The lessee or the company, without reducing the plantation area, may use the land for horticulture and growing medicinal plants, on an area not more than 3 % of the total grant area of the garden.”

Yet numerous tea companies are running tourism activities. With whose permission?

Workers at the Glenburn tea garden pointed out that an individual stay at the Glenburn Tea Estate costs Rs 25,850 per night, but garden authorities refuse even to use a minimum portion of the earnings for workers’ welfare.

To reduce the cost of production and labour disputes, a few companies have already tried mechanising the tea plucking process. They failed, but they are still experimenting and are hopeful about it. In the last two years Goodricke has mechanised spraying operations in its tea gardens, saving five lakh man-days. Now they are looking to mechanise 10% of plucking operations. If the model succeeds it will be difficult for workers to survive. Said Subba, “The tea industry never shuts but workers will suffer if machines will do their job.”

However, the young generation don’t want to join tea gardens as it pays less than almost any other job. But the elderly people, mainly women, still want to continue in this industry as they have no land to live on, other than the workers’ quarters. Working in tea gardens only fulfils these families’ daily living expenses. 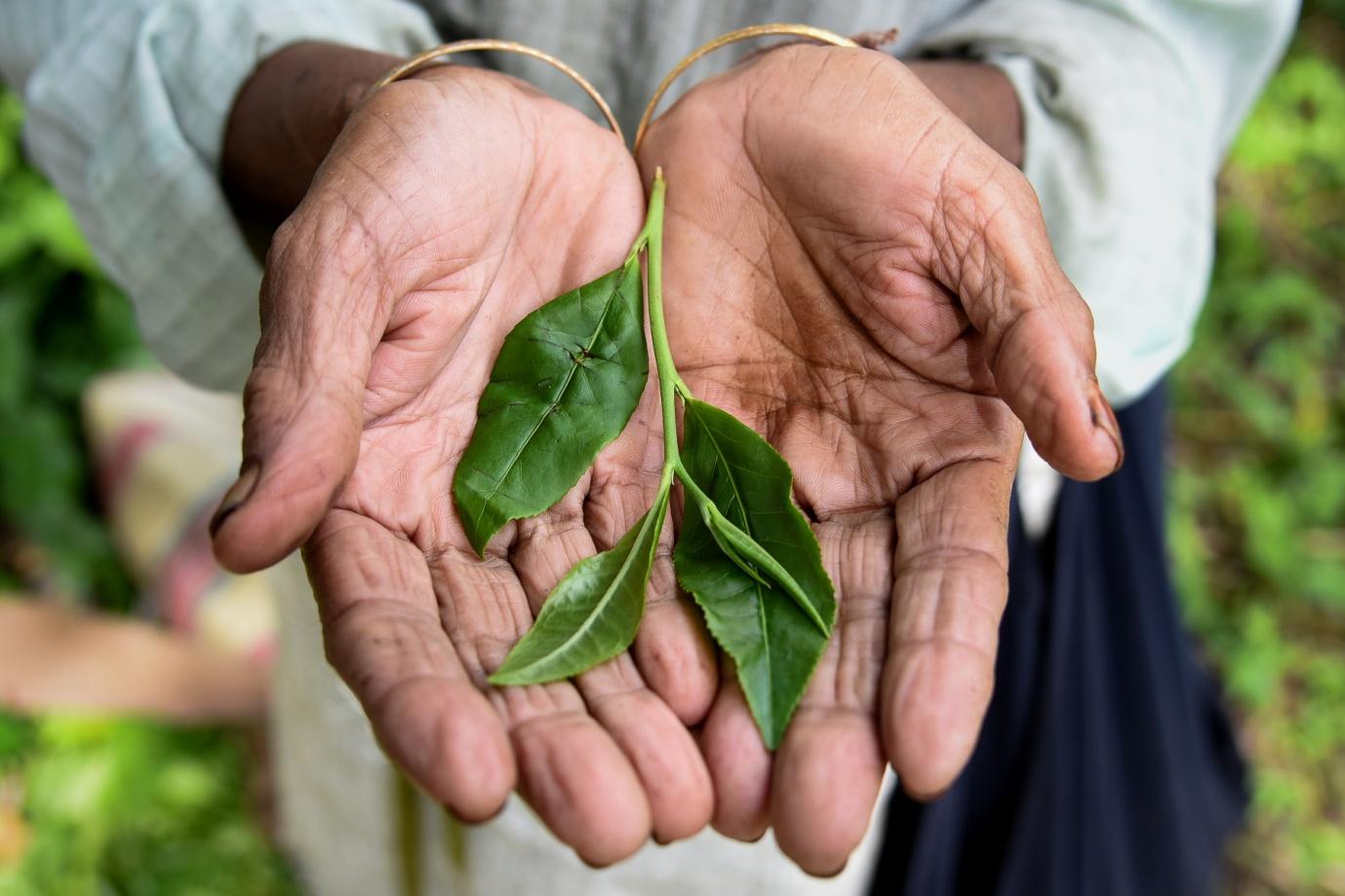 Workers are plucking four leaves one bud instead of two leaves one bud, as companies mandate that each worker must pluck 20 kgs of leaves per day or have money deducted from their salary

Manthan Gurung, a schoolteacher at the Sungma tea garden said, “As we have no livelihood opportunity here, most young men either join the army or move to metro cities to work in the hotel industry. Members of 80% families in tea gardens have migrated for better opportunities. Workers have minimum access to government developmental schemes, and people are hardly aware of the schemes and their rights.”

Many women have migrated to Gulf countries for better livelihood opportunities. Trade union leader Abhijit Mazumdar said, “Tea gardens don’t create employment opportunity for everyone; there should be some additional industries like food processing which is suitable for Darjeeling’s weather.”

He added, “When a company’s accounts are fake, and production figures are manipulated to avoid taxes, non-tea activities like tea tourism are potent threats to the industry. The plight of the open tea estates is not much better than the closed.”

Tanmoy Bhaduri is an award winning photojournalist and writer based in Kolkata.