As one browses through the captivating array of books on display at the Oxford Bookstore in Connaught Place and enters the lively sound of conversations at the adjacent Cha Bar Café, a single scintillating sight unravels.

At the corner stands a 48-year-old man showcasing his art. Unmasking the beauty of these caricature portraits, diaries and apparel, one notices his right palm is filled with inked letters. He does not speak but humbly enamours you with his vibe, intently focused on what catches your eye.

Like a theatrical piece, the gentle drama around him unfolds as he writes on a piece of paper, explaining the beauty of his products, especially the Frida Kahlo diary looking straight at you. He is trying to be your friend, communicating intensely with energetic hand movements, gestures and an excited smile. And in a moment, the truth reveals itself.

Such struggles have been a pertinent part of Amit Vardhan’s life. Popularly known as a caricature artist, Vardhan has risen above his own limitation of sound. Though he was born with the capacity to hear, unfortunately he lost it soon. He tried using basic hearing aids but typically they would not match with nearby frequencies, making it even more difficult for him to hear or speak.

In his childhood years Vardhan developed a gifted understanding of art. Be it drawing or painting, he loved to experiment with this nascent idea of belonging to the artist’s world. Recreating inspirational art became his passion. Later, he pursued a combined Bachelors and Masters course at the Delhi College of Arts and Commerce (DCAC), which played a pivotal role in his empowerment. 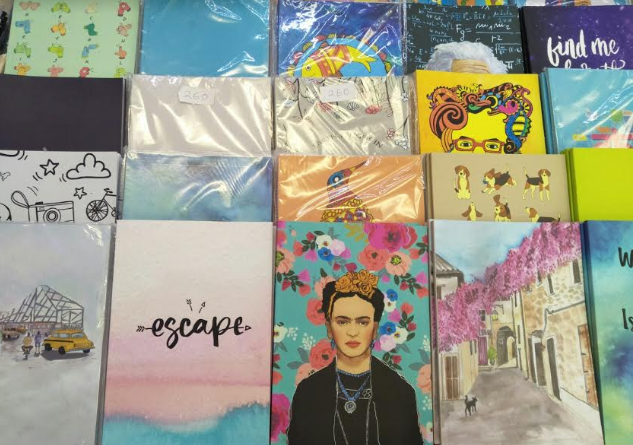 I ask about the impediments Vardhan faced during the initial part of his career. Nagpal interprets his signed response. “Ideas were limited. Collaborations and networking opportunites were few. In spite of being very good at painting and sketching, most of us are not able to convert it into a feasible career. However, now graphic design is a better option emerging for us,” Vardhan explains through his hands, gestures and animated body language.

For Vardhan personally, belonging to the wider community wasn’t a difficult talk. He never faced discrimination in the initial years. He polished his skills in mimicry to make people laugh. As his life progressed he was also able to marry his partner, who is also hearing-impaired. She too is well versed in the culture of art and is involved in stitching and embroidery projects. Quite interestingly, their 17-year-old daughter who is currently studying in Class 12 was born ‘normal’ – and perhaps with her energy, chatter and ambition she innocently creates sound in her parents’ lives.

Fondly remembering her first encounter with Vardhan at a Diwali mela in 2012, Nagpal says, “We started out with a small project involving hand-made products like painted kettles. Thus, we at Atulyakala started primarily as a design house. Even in DCAC, the deaf community is very segregated and teachers do not know sign language very well. We did not merely limit ourselves to design now, and have spread into the lifestyle segment, also working with deaf designers in Denmark.”

Of her own experience Nagpal says, “Both my elder siblings were born deaf. I started picking up the nuances of sign language quite naturally. In fact, my natural gift for conversing in sign language developed before I even started walking.” Further harnessing her potential, Smriti is also involved in giving free sign language classes, every Saturday in Delhi University’s South Campus, in an effort to bring more cohesive networking in this community.

Nevertheless, the journey of including the deaf community in a business ecosystem has been tough. “We did not want to be a charitable organisation. We wanted to create a self-sustaining business model capable of functioning on its own merit. We started out bootstrapping and today we are able to raise investments. The process of creating even a small diary is very intricate in its entirety. A deaf artist does the sketching which is later converted into a digital format by another deaf graphic designer. So the nature of collaboration between these two artists is also different and an art,” says Nagpal.

The very idea that artists like Amit Vardhan represent in our monotonous daily lives is quite inspirational. It possesses the soul of empowerment, the notion that art is not alienating. In fact, art has the power to create certain permanence in our lives. Furthermore, sign language, when learnt properly, reveals an entirely different world. Just as any other language it has its own complexities and rigour to understand new words. Both art and sign language have a therapeutic essence.

“We are now looking forward to entering the luxury stationery and jewellery market segments. In the near future, we will launch impact hubs in various cities across the country which will function as help centres for deaf people,” explains Nagpal, beaming with innocence and ambitious spirit.

In a nutshell, for every customer who purchases a product from Vardhan’s store, there’s a life long lesson he teaches. “Break the walls, take new initiatives and always make new friends,” gestures Vardhan. One look at his fierce and energetic spirit is a gift in itself, reflecting that life really is beautiful, and that no impediment stands a chance if one is determined to try.