Lilly Nadar and the Protest Rhythm

The word ‘parai’ in Tamil means to speak or tell

When Lilly Nadar, 32, a resident of Virudhnagar in Tamil Nadu plays her drum, a traditional folk percussion instrument called Parai, she also marks her protest, in the process breaking many stereotypes.

For one, playing the parai has always been the preserve of men. This makes Lilly (as she asks me to call her) a trendsetter, a breaker of archaic social norms.

Then, the parai is customarily played only by Dalits. It is made of cattle hide and no orthodox upper caste Hindu would touch it, leave alone play it. Lilly herself belongs to the Nadar community from which, she says, no one plays the drums.

Over the centuries, suggestions that the instrument can be played by upper caste Hindus have evoked very strong and often violent reactions.

Lilly not only plays the parai, and beautifully, but she has turned it into an instrument of protest.

The word ‘parai’ in Tamil means to speak or tell, and for centuries the instrument was used to announce the king’s messages or for public announcements. It dates back to the Sangam period in Tamil history.

In our times the parai is played in religious functions, marriages and funerals. When played with passion, it truly has the ability to stir up emotions in the audience. That is why it is often played at such emotionally charged high events.

A flat and hollow drum made with the wood of neem tree, the parai is played with two sticks and the performer often dances (called attam) while playing it. The whole performance is thus called parai attam. 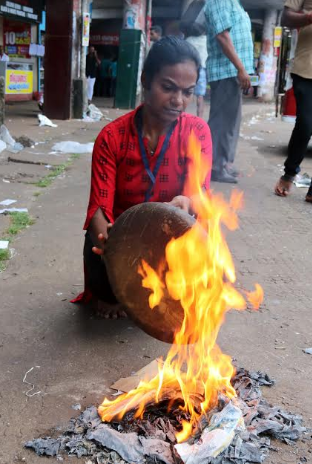 Lilly was attracted to the parai as a child and secretly harboured a dream to play it for the public. Had she not clung to her dream, travelling the country with her drum and living her life as a social activist would not have been her identity.

Coming from a financially deprived family, Lilly represented the exact middle of her all five girl siblings. Says she, “With not much means to educate me, my family had sent me to a nunnery and I was duly studying to be a nun. I lived the life of a nun for three years but then I felt disillusioned.”

That was when she decided to do what she always wanted. Play the parai and learn theatre. But it was easier said than done.

“Leaving the church was a huge decision for me to take, and my family was absolutely against it. They were aghast when I told them about my desire to learn to play parai and theatre. I was told that if I left the life of a nun and pursued parai, then I would be on my own. The family refused to support me. I was put under extreme pressure and was almost on the edge.”

But Lilly did not give in. “I had taken my decision and there was no going back. I decided to take charge of my destiny.”

That was over a decade ago. After embarking on the art of playing parai, Lilly has been performing for a decade as a solo artist and as part of a theatre group.

She also trains other youngsters, girls and women in the art of playing the parai.

Today, she lives in the Nagar Koil, in Kanya Kumari District, is unmarried and is supporting the education of her sisters.

In the last few years she has used her art to convey the message of love and at times protest too. Says she, “I play my instrument on different occasions, including marriage functions, which is just for sustenance. But the best is when I play it to advocate a cause.”

Lilly routinely performs in protest meetings and programmes organised by different social groups on these issues. “Causes such as women’s rights, gender equality, Dalit rights, human rights and protection of the values in our constitution are all close to my heart.”

Before a performance can commence, Lilly Nadar must heat the Parai, holding it over a small bonfire. The process dries the moisture from the surface of the drum and tightens it. This lends the drum its high-pitched, cracking sound when it is struck.

But the act of heating the drum with fire to fit it for performance is laden with symbols. It is as though Lilly is using the fire to kindle a fire within. She proceeds to drum out her message, loud and clear.