The Liberation of June

70% of women in prostitution are forced into the trade and 20% of them are small girls. Thailand, Cambodia, India, Brazil and Mexico have been identified as leading hotspots of child sexual exploitation. Most child prostitutes in India live in Andhra Pradesh, Karnataka, Tamil Nadu, West Bengal, Maharashtra and UP.

June, a short film directed by Viplab Majumder, deals with the subject of child prostitution, child trafficking and AIDS with a restraint and subtlety difficult to achieve considering its subject.

June is the name of a 14-year-old girl who is diagnosed as HIV positive, and is told she has just a few months to live. The doctor the Maasi takes her to is shocked when he learns that though just 14, June is not a virgin. Afraid of facing the consequences of the girl’s death, the trafficking woman brings her to a dilapidated home for a short while.

June, who does not know how to read or write, makes drawings on sheets of paper and then tears them up. She hardly talks through the film but speaks through her silences. The doctor had advised the woman to send her to a missionary home in Kolkata. The woman asks two young trafficking agents to sell her off. A deal is struck at Rs 30,000 with the agents getting a 50% cut.

But June eavesdrops on this conversation and decides to run away.

What happens when she does so makes for the climax of this very low-key film on a high-key issue.

The film is mostly silent, filled with live sounds of chirping birds, the sounds of the car across hilly roads chasing the runaway girl on a bicycle, and a few words exchanged between and among the few characters – while the girl, quiet but intelligent enough to understand her position, decides to take life in her own terms even if it means death.

The cinematography is beautiful and captures the picturesque greenery of the village, panning up to show the sky against the setting sun, or the blue sky with clouds floating across, or the interiors of the small room where June either draws sketches or has nightmares when she falls asleep. 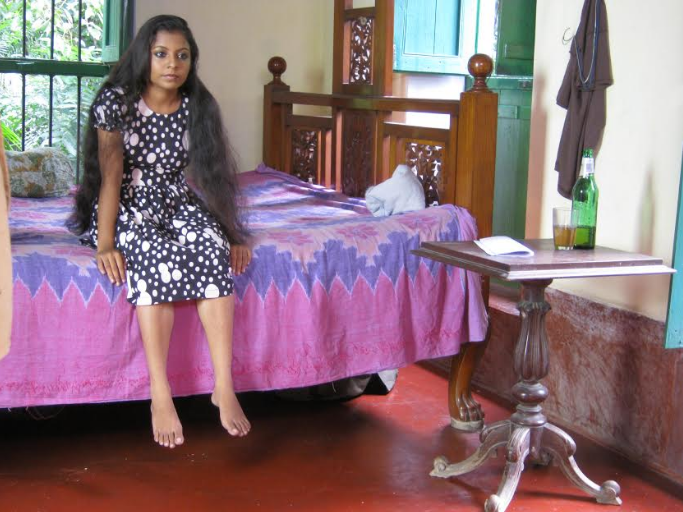 Says Majumder, ‘I discovered the tragic reality of these girls when I was shooting my long documentary Divine Drums on the Dhakis of West Bengal who come to Kolkata to play on their drums (dhaaks) during the Durga Pooja and other festivals, and then go back to their village to live in dire poverty.

‘I saw a very poor Dhaki family. They had four children. The older of the two girls, 17 then, was already a prostitute and she began when she was 14. Her 13 year old younger sister was about to join the trade too because small girls command a high price in the flesh market. I was so shocked that I went into depression for two or three weeks, and then wrote this story.’

When the driver of the car in which they are taking the girl to sell her all over again despite her critical state of health, asks the agent why she is called June, he calmly says, ‘She was probably found in the month of June so they called her June.’

In other words, this girl does not even have a name she can call her own. But she intelligently plans her escape to the missionary in Kolkata with the help of a village boy she befriends. She rides piggy back on the boy’s bicycle and manages to catch the bus to Kolkata.

The film ends on a tragic note, with the small boy receiving a letter from the mission informing him about the ‘liberation’ of June – with a philosophical Tagore number, Amar mukti aloye aloye ei akashe, floating across the landscape.

The film was shot entirely on location at Falta in West Bengal. Majumder immediately picked Shukla Das, the small girl who plays June, from a play he saw her act in.

The film was made in 2012, six years ago but it is still being screened at many film festivals as the opening or closing film, and has won several awards.

Says Majumder, ‘I hope the message I want to put across is understood by the audience and the jury. Festival screenings have been very good for me. I spent Rs 2 lakhs on the film and I got back Rs 40,000 from the awards, and that is very good because I do not wish to make money out of cinema. My uncle pitches in with financial help. I could make the film on celluloid, which was a dream come true.’

The graphics that come at the end of the film state, among other things, that in India around 1.2 million children are involved in prostitution. The Ministry of Women and Child Development estimates that about 40% of all of India’s prostitutes are children.

Majumder has already made a full-length feature film on human trafficking called The Forgotten Daughter. But the film is yet to see a theatrical release because the producer doesn’t have the funds to release it. ‘I always want to make films with a powerful social agenda,’ he adds.

‘Silence speaks its own language. Sometimes it creates a void in people’s life, sometimes it fills one. For June, a teenage prostitute in Bengal, silence was her voice as her life passed by in a blur. She often looked outside her window at the world that awaited her, till death came knocking and promised her redemption.

‘But was it that easy to find one’s way out of these walls? Would life embrace her, the way she had hoped?’