In a secluded corner of the bustling multi-storied market called the Mohan Singh Palace in Delhi’s Connaught Place, lies an old shop with an older man and an even older collection of stamps. Mr Puri is the owner of the minuscule shop simply named Stamp Corner; an old recluse patiently pasting stamps in a scrapbook.

When asked about his passion and this shop, his face sports a disgusted look, as if his state of nirvana has been broken. Then he urges me to leave his humble abode. In this cold month, it seems like I have found my Uncle Scrooge.

The neighbouring shopkeepers and a few others in the philately circle tell me how Mr Puri inherited an interest in stamp collecting, and the shop from his father, and how solitary his demeanour has become the past few years. There are times they say, that he refuses to sell certain stamps to eager customers, for the simple reason that he’s too attached to them.

Now Connaught Place is a holy site for philatelists, as apart from small stamp sellers the National Philatelic Museum (run under the aegis of the Department of Post) is also present nearby on Sansad Marg. My failed attempt at a tete-a-tete with the owner of Stamp Corner brought me to a popular shop in CP with an elaborate name. Gainda Mull Walayati is a gift shop selling traditional handicrafts and showpieces, along with assorted sets of old coins and stamps.

‘We started selling stamps only about 10 years ago but they are probably the least selling items in our shop. The children and the adults both are addicted to their smartphones so that leaves no time for a patience-filled hobby like collecting stamps,’ Mohan, one of the shopkeepers from here, remarked. 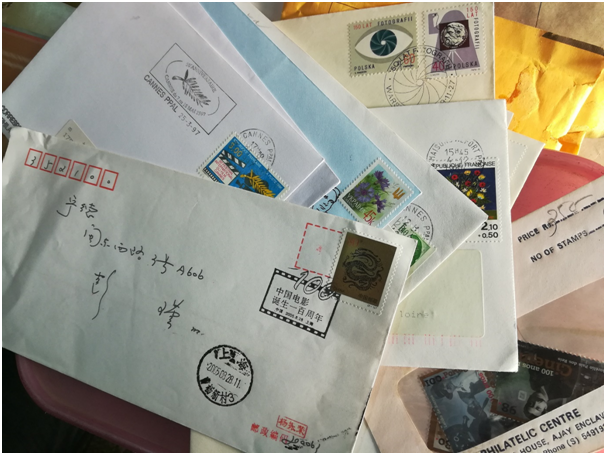 It seems that people like old Mr Puri and the young Mohan are some of the last custodians of the lost art of philately.

After talking to several stamp sellers and private stamp collectors it became clear that this is a hobby requiring individual incentive, something that wouldn’t come naturally to any person living in this century.

Luvmeet Singh, for instance, says he inherited a vast collection of stamps from his late grandfather which eventually harboured his interest in philately. Singh’s collections are known for several post-independence mint stamps from India.

For Hemant Kumar Godhani who lives in Laxmi Nagar, being a stamp aficionado was again a familial matter as he was inspired by his uncle’s collection.

However, similar interests don’t always run in the family. As 72 year old Awtar Singh Banga said in a bittersweet tone, ‘I’ve started selling off my collections as I know none of my sons are interested in this hobby. I’m afraid that if the stamps are with them, they might eventually sell it to the kabadiwala.’

After settling his family and retiring from his engineering job, Banga began selling stamps as a business only after 2005. The J.J. Philatelic Centre is a small shop in Ashok Nagar filled with towers of boxes containing stamps of a whole variety of countries and themes.

Banga proudly claims he is the city’s first ‘thematic philatelist’. Finding an Iranian stamp in a matchbox on the way home from school, a younger Banga grew passionate about these little squares and rectangles of paper. In college an Englishman chanced upon his collection of stamps on Nepal, and agreed to give him stamps from England and the Commonwealth nations in exchange for his.

The deal was confirmed and so was A.S.Banga’s passion; from 1955 on he decided to dedicate his life towards collecting stamps.

Today, he says philatelists value his total collection in the shop at a staggering 30 lakh rupees. His business is going well as he has had faithful customers and acquaintances from India as well as countries like Australia and Poland. But making profits is not his top priority as he feels he has worked enough in his life - and operating this shop is the work of passion.

On the other hand, shops like Gainda Mull aren’t faring well even though they are driven by commercial interests. The irony is paper thin.

Clearly, modern day philately in India has become a diverse field with diverse reasons for becoming a part of it. Unfortunately, the majority of philatelists are of the view that it is a dying art and might even cease to exist as a word in our vocabulary in the not too distant future.

‘The government hasn’t taken many initiatives to preserve this art and nobody writes letters, at least in the metropolitan cities. So how can we expect anyone to make stamp collecting a hobby, leave alone a passion?’ asked Hemant Godhani.

A.S.Banga felt that one of the less obvious reasons for philately’s decline is that it’s a field that requires long-term commitment, while current generations are focused more towards things being quick and simple around them. Several collectors emphasised how the practice has made them ‘disciplined and knowledgeable’.

To put it in a nutshell, people in the city hardly seem to care about something trivial like stamps. But those who do, do it with a full-fledged curiosity and desire. They are curious about more and more countries and cultures to explore and they desire ever more of these little stamps to add on to their miniature legacy.

The future of this lost art can be expressed in Awtar Singh Banga’s poetic words, ‘Maana ki antim saase hai, par jeevan ki aas ab bhi baaki hai’ - I might be breathing my last, but the will to live still remains.